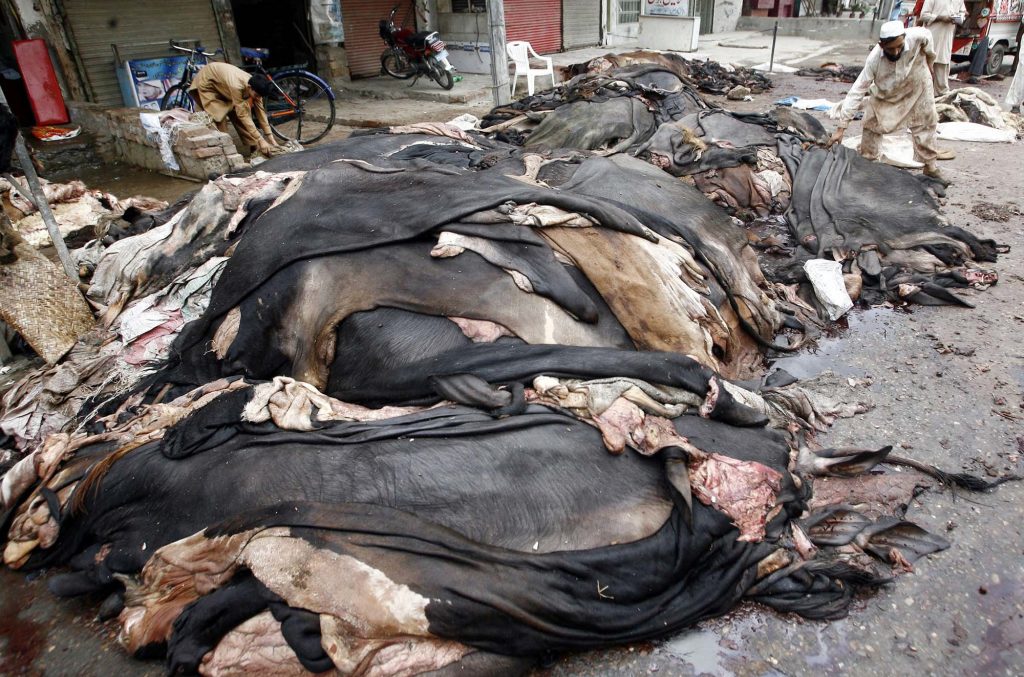 The Muttahida Qaumi Movement’s (MQM) announcement that they would not be collecting sacrificial animal hides this Eid for their welfare wing Khidmat-e-Khalq Foundation (KKF), was received with a mixed response, ranging from surprise to skepticism, by both supporters and detractors. Some claimed it was part of the rebuilding of the party image, others that it was an attempt to mend ties with the paramilitary force, the Rangers. Last year there was a scuffle with the Rangers when they arrested MQM workers who were on a hide collection drive, and confiscated the skins. This had led to a verbal spat, and a defamation notice was served by the Rangers on MQM leader and recently elected mayor of Karachi, Waseem Akhtar. Still others viewed the ‘no collection’ decision as a sign of the central party organisation losing its grip on the party’s units and sectors, as a result of the crisis engendered by the August 22 Altaf Hussain harangue.

Dr Farooq Sattar, head of the MQM and one of the trustees of the KKF, announcing the ‘no-collection’ decision on September 10 at the press conference held at the party’s new head office, said that MQM workers had, in the past, been accused of using coercion in the collection drive, and of snatching hides from competitors. Hence, the MQM leadership had decided to halt the collection drive this year. Sattar also said that the party was halting humanitarian activities across all Sindh districts, and would be reorganising party cadres that were working with the welfare wing.

Some party supporters, not in touch with ground reality, were dismayed by the announcement, and termed it an “act of surrender” and a “sign of weakness” from the party’s new leadership. But lower tier party supporters and cadres were relieved. They felt the announcement had saved them from potential unpleasant encounters with the law-enforcement agencies (LEAs). Last year, during the three days of Eid ul Azha, the Rangers had arrested 356 people, the majority of whom were MQM workers. Of these 32 were released, 288 handed over to the police, and 36 were interrogated by the Rangers for involvement in serious crimes. This had led to a war of words between the two, and the MQM was forced to call off their hides’ collection campaign on the third day of Eid.

“In the course of the LEAs operation, MQM workers were often picked up in targeted raids from the party offices and their residences. And, during the by-polls in the last couple of months, activists have either been attacked by their political rivals, or detained by the LEAs from the election camps,” said an MQM worker from Saeedabad. “This has forced most of the workers at the unit and sector level to change locations and go into hiding to avoid being arrested by the Rangers and police.”

When asked why the MQM did not ask elected councillors and chairmen of the Union Councils to help in the hide collection campaign this year, the worker explained that, “They were expected to take care of other issues. They (the local councillors, etc) were busy with arrangements pertaining to the setting up of Eid ul Azha cattle markets, assuring safety measures in the wake of the fear generated by the Congo fever epidemic, and cleaning the city of the remains of sacrificial animals during Eid.” Masood Alam, municipal services senior director at the Karachi Metropolitan Corporation (KMC), told the press that the “presence of elected representatives is likely to result in better cleanliness work this time around.”

The issue of the collection of sacrificial animals’ hides has often been linked with the vote bank, as it is portrayed as a public measure of support, credibility and popularity. And the MQM leadership has often used the numbers of hides collected, to this end. In his October 2014 address, after the Eid holidays, Altaf Hussain, in fact, lauded his party workers for collecting a record number of hides and taunted his political rivals by saying that those talking about the decline in the MQM vote bank should come and count the hides collected by them.

The Jamaat-e-Islami (JI), the political predecessors of the MQM in Karachi, with its own welfare wing, the Al-Khidmat Foundation (ARF), has long been struggling against the MQM. Following the MQM’s call to abstain from collecting hides this Eid, the JI emerged as one of the main beneficiaries of this decision, claiming that its party workers had amassed a record number of hides — far more than the MQM had ever collected.

According to Abid Qayyum, an activist of the JI youth force and an office bearer in district West, “People have shown their trust in us by donating 1.4 million hides to the JI. We got one million votes in the 2013 elections. Now those who trust the Jamaat in donating money should also trust us with their votes. They will not be disappointed.”

Non-political humanitarian organisations validated the JI’s claims of the increase in the number of hides collected. They said this jump in numbers was mostly due to the improved law and order situation, but acknowledge that the MQM’s decision also had a share in the JI’s haul of hides. But political parties are not the only contenders for this trophy; they have to compete with the huge network of religious seminaries across Karachi, and other jihadi and sectarian organisations that remain active in the hides collection campaign.

Previously, organisations and religious seminaries were offering the facility of collective sacrifice — ie people would get their share of meat, while the hides were left with the organisers. The practice boomed during Karachi’s troubled years, as people, wanting to avoid being caught in the scuffle for hides, would participate in the collective sacrifice at the seminaries, or with organisations like the Edhi Foundation, the Saylani Trust or the Chhipa Welfare Association. But this time, the number of animals bought and sacrificed at home by people themselves was significantly higher. This apparently because people were less apprehensive of being caught in the crossfire among different political groups over the hides’ collection.

“This year we had no fear that we would be forced to give our hides. In the past the hides from our sacrifices were snatched by the MQM,” said one resident of Baldia Town.”

Maulana Rashid Ali, a cleric and administrator of a madrassah in Orangi Town, shared an interesting fact. He said, “Our faith does not permit us to use the amount we garner from selling hides in the administrative or the maintenance work of madrassahs. But we can spend it on our students.” He further clarified. “Since, I have no residential students in my madrassah, I cannot collect hides. That is why clerics are desperate to bring in residential students. This helps in drawing in funds, and legitimising donations.”

With the worsening situation in Kashmir, jihadi organisations with welfare wings, have also been quite active in collecting hides and donations. The Jamatud Dawa’s (JuD) welfare arm, the Falah-e-Insanyat Foundation (FIF), the Harkatul Mujahideen’s (HuM) Alansar Trust, and the Jaish-e-Muhammad’s (JeM) Al-Rehmat Trust, were all busy with collecting hides this Eid.

Arsalan, a resident of Gulshan-e-Iqbal, Karachi, disclosed that affiliates of the JuD approached people at their homes asking for hides. According to him “they were even bigger beneficiaries of the MQM decision not to collect hides than the Jamaat-e-Islami.” Meanwhile, supporters and sympathisers of the MQM were asked by local MQM workers to give their hides to Edhi, Chhipa or Saylani.

The MQM was not the only party which did not benefit from the animal sacrifice on Eid this year. The Ahle Sunnat Wal Jamat (ASWJ) also announced that they would not set up any camps for hides collection and suggested that those who wished to donate to them, should approach the mosques and seminaries run by their office bearers. In the past, ASWJ activists had clashed violently with the MQM over the collection of hides in areas like Orangi Town, Gulshan-e-Bihar, and Qasba Colony. Since then, many ASWJ activists, who were accused of involvement in sectarian killings, have been either killed in police encounters or are facing trial. And the rest are on the run.