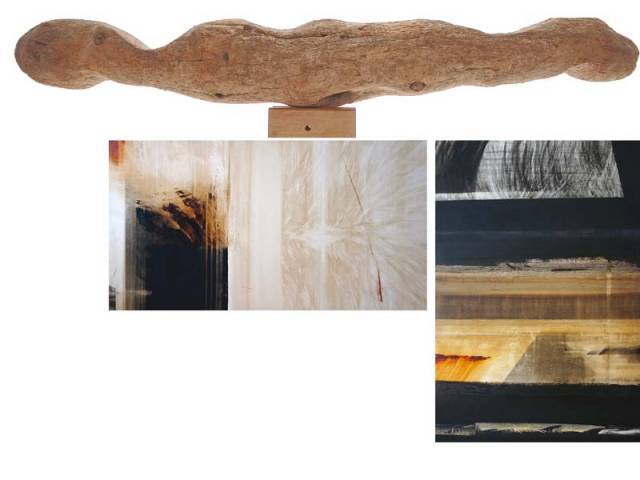 There is a meditative quality to Ayessha Quraishi’s panoramic work, a sense that raw feeling has been distilled into something perceptible but inexplicable. At her recent show at Koel Gallery titled Open Presence, Ayessha comes across as a medium for subliminal feelings that barely break the surface of conscious thought. Her statement explains: “Open Presence is the acknowledgement of the space of consciousness, an intermediate space between senses and states.”

Ayessha is a self-taught artist who has been exhibiting in group and solo shows since 1989. She has also participated in two biennials in Turkey. This is her second show at Koel Gallery.

Ayessha renders her idea of what constitutes intermediate space by creating abstract fields of colour, geometry and texture. She uses colour in striated bands and feathery strokes in the style of gestural mark painting — a term that developed out of the Abstract Expressionism of the ‘action painters’ such as Jackson Pollock and Franz Kline. The loose and flowing application of paint was meant to represent a mental state or emotion and therefore create a subjective landscape of inner feelings.

Ayessha’s paintings come across as serene rather than dynamic. Her art is anti-didactic and metaphysical. It leaves comprehensibility up to the response of the viewer. There is a hint of automatism, of letting the emotions filter the impressions of the universe through the person of the artist. This is particularly evident in works which combine abstraction with some recognisable imagery as in the paired paintings titled ‘in the absolute presence of a distant light’ 1 & 2. Painted in monochromatic shades of grey, these paintings show a glimmer of the distant horizon as if seen on a dark, moonless night.

Her work is purely abstract. She restricts the colour palette to white, black and sepia hues. In the series ‘touching blind, inside out’ 1-10, worked in oil and pigment on paper, a similar exploration with secondary colour mixes has been executed to the point where several paintings are virtual colour fields with impasto paint. Number 1 in the ‘touching blind…’ series emphasises texture alone, as it is painted ivory white with all over cracking of the paint.

Each work is accompanied by a poetic title that gives a hint about Ayessha’s state of mind that has inspired that particular piece. The titles are as enigmatic as they are intriguing, such as ‘a word of love in the shape of burning awareness, I offer.’ All titles are written in lower case and form a significant part of the viewing experience. Their riddling play appeals to intuition rather than to the intellect.

Several paintings have been unconventionally framed within wide, wooden brackets that grasp the sheet of paper at two ends.

Two beautiful wood sculptures are included in the show. Their material is raw, fissured and unpolished, with rounded curves as if sculpted by wind and water. The sculpture titled ‘dawning into coherence’ stands upright at 40 inches. It is barely suggestive of the human form and yet it cannot be mistaken for anything else. The second sculpture called ‘the form of the last shadow’ is horizontal, perhaps in death or sleep. The strongly embryonic and featureless mass of the sculptures suggests states of intermediate being rather than accomplished form. The titles provoke reflection on what comes before and what is left after the business of living.

The wall-mounted plaque at the entrance of the gallery displays the artist’s statement, which also includes quotations by two writers. The first quotation is from Andrew Harvey, a writer on mystic traditions. His quotation includes the statement: “The journey and all its different ordeals are all emanations of the One Spirit that is manifesting everything in all dimensions…”

The second quotation is from P D Ouspensky, the Russian esoteric philosopher. It states: “It is only when we realise that life is taking us nowhere that it begins to have meaning.”

A spectrum of sorts comes into being between the “One Spirit” in Harvey’s quotation and the “nowhere” in Ouspensky’s statement. Within the spectrum of an all-encompassing energy and an indeterminate journey, numerous intermediate states become possible. The artist’s pairing of quotations provides another clue with regard to her intent in developing the notion of open presence.