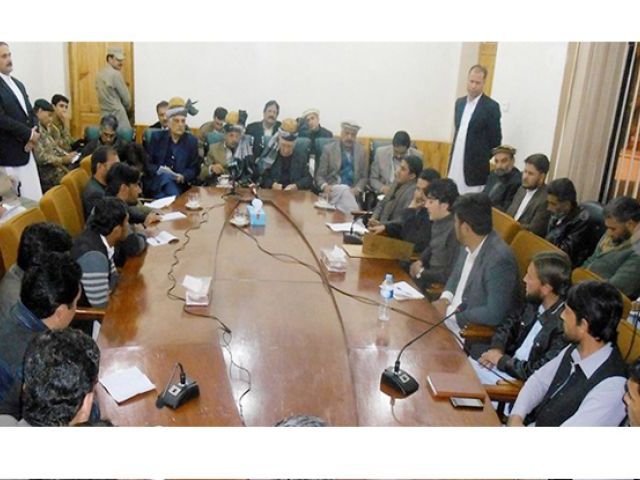 The extension of the Political Parties Act to the Federally Administered Tribal Areas (FATA) by the PPP government under then President Asif Zardari resulted in raising political awareness among the residents of FATA. Though the National Action Plan (NAP) proved to be the catalyst for the call to mainstream FATA, yet it is this awareness that kept the reforms debate alive amidst an otherwise impenetrable status quo ruling the region for over a century. The political leadership and people of FATA have for long pushed for the integration of the region with Khyber Pakhtunkhwa (KP) and for equal Pakistani citizenship.

Responding to these pressures, Prime Minister Nawaz Sharif formed a five-member committee, headed by Sartaj Aziz, to propose ‘essential reforms’ for FATA. The committee does not include any representative of FATA, and almost all members have been part of the establishment that has resisted meaningful reforms in FATA in the past. Despite having three elected MNAs from the region, the PML-N government did not include them in the said committee.

The report presented by the committee to the Prime Minister recommends the integration of FATA into KP in a phased manner, allowing for a ‘transition period’ of five years. Meanwhile, the Frontier Crimes Regulations (FCR) would be abolished and FATA would be ruled under a new Riwaj Act, wherein jirgas would be held under a judge, claims the report. Extension of the jurisdiction of the Supreme Court and High Court have been recommended. There is a provision for holding local bodies’ elections in FATA before the end of 2017.

The report argues that during the ‘transition period,’ the government should focus on rehabilitation and reconstruction, socio-economic development, capacity building of Law Enforcing Agencies (LEAs) and preparation of land records in FATA, so that it could be successfully integrated into KP.

The committee suggests a comprehensive implementation process for reforms in FATA. However, the complex mechanisms set down for introduction and implementation of reforms runs counter to the objective. The report is in favour of keeping Articles 246 and 247 of the 1973 constitution intact, at least during the transition period, although they are longstanding constitutional hurdles in the way of reforms.

One wonders as to how any meaningful reforms could be brought about in the presence of these articles, which curtail the power of the Parliament, the Supreme Court and the High Court to exercise authority in FATA and put it under the direct rule of the President.

Disturbingly, the report also mentions the role of the office of Political Agent and FATA Secretariat in the implementation of reforms, the very institutions that the residents of FATA want abolished and replaced with an administrative system similar to the rest of the country.

It has been left to the FATA bureaucracy to decide as to which part of the tribal agencies the reforms should be extended to, while others remain under the old system on security and administrative grounds. It is thus feared that a large part of the tribal areas may be deprived of reforms and only a few areas such as the main towns will benefit.

Another intriguing question for the residents of FATA is how their fundamental rights, as enshrined in the constitution, could be guaranteed in the presence of jirga and riwaj as adjudicating institutions. The infamous collective territorial responsibility forms the core of jirga and riwaj, so how would the new, yet equally unjust, system be an improvement on the FCR?

Changing the nomenclature of the previous system does not amount to mainstreaming FATA. Political reforms in FATA have been wrongly tied to the socio-economic development of the region in the report. The socio-economic backwardness of FATA is due to the lack of a proper governance system, which could guarantee political and civil liberties. Therefore, political reforms in FATA should precede economic development and must be introduced at once, while work for the socio-economic uplift of the area should also be started.

Fundamental rights, as well as the civil and political liberties of all citizens must be protected, irrespective of the socio-economic development, or lack thereof, in all regions of the country. Lack of development and infrastructure is no excuse for keeping millions of people under the rule of a draconian set of laws and colonial system of governance.

It is not fair to keep the people of FATA from enjoying their political and civil rights because roads and schools have not been built yet in their area. Only a committee of bureaucrats can come up with such twisted logic.

A critical analysis of the ‘Report of the Committee on FATA Reforms 2016’ reveals that the PML-N government is trying to wriggle out of the responsibility of changing the constitutional status and governance system of FATA. The provision of the five-year transition period is a ploy to buy time until the elections of 2018, thus leaving the gigantic task of FATA reform to the next government.

The tribal areas have been altogether ignored in the political and constitutional history of Pakistan. The constitutions of 1956, 1962, and even the much celebrated one of 1973, had nothing to offer but an archaic colonial set of laws and governance system. It is unfortunate that the tribal areas were not mainstreamed in 1947. Other such opportunities of extending the rights and privileges of Pakistani citizenship to the tribal region were also lost. The otherwise turbulent politics of mainland Pakistan has witnessed major changes and shifts but the status quo in FATA has remained intact. No political leader, party or military dictator has tried so far to liberate the people of the region from the stranglehold of the inhuman FCR.

With the stipulation of the ‘transition period’ for socio-economic development as a prerequisite for introducing political reforms, the present committee’s report seems to be incapable of changing the political fate of the residents of the tribal areas. It is a time buying tactic for the PML-N at best.

Post 9/11, thousands of people have lost their lives and homes in FATA. The Islamist insurgency and war on terror have changed the landscape of the area. After clearing the region of terrorists, the civilian and military leadership of Pakistan has vowed to reform and mainstream FATA and the pledge has been made part of the National Action Plan. It is, therefore, necessary to deliver on this promise.

Instead of complicating the issue further, the government must integrate FATA into KP through a constitutional amendment, before the 2018 elections, thus honouring the resolution of the KP Assembly to this effect, passed in 2012. The KP chief minister supported the demand in a recent meeting
with representatives of the ‘FATA Political Alliance.’ Increased political awareness across FATA supports integration and the people expect meaningful reforms. They cannot be silenced by mere promises. The time has come to merge FATA into KP.