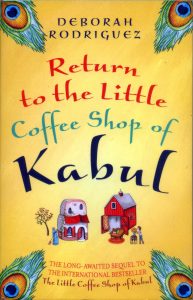 Sunny, the much-loved boisterous American proprietor of the coffee shop, a small haven for expatriates and visitors of all shades and nationalities, leaves Afghanistan with her husband, Jack, to try and resettle in a “normal” US, where life is not endangered on a daily basis. She leaves the coffee shop in the safe hands of her Afghan ‘family’ — Bashir Hadi, the expert brownie-maker; Halajan, the owner of the property, and a feisty, cigarette-smoking, outspoken feminist who remembers Kabul before the Taliban; Ahmet, her “fundamentalist” son who is bemused by his widowed mother and her decision to finally marry the man she has loved for which he, the son, has to give permission; and pregnant Yazmina, Ahmet’s wife with a small daughter from her first marriage. The new proprietors try to retain, despite the odds, the service and atmosphere of the coffee shop started by Sunny, and keep alive some semblance of normality in the conflict-ridden society that is Kabul.

Meanwhile, Sunny is restless, so she and Jack circle the globe from “Cairo to Caracas” for 14 months, prior to finally “settling.” She comments on how she felt alive in Afghanistan — where “more seems to happen in just one day than happened in a lifetime anywhere else.” Despite being a sequel, the book works as a stand-alone story, though there are frequent references to the past and most of the characters are carry-overs.

Unfortunately, the settling into mist-enshrouded Twimbly Island, where Jack had bought a would-be vineyard and crumbling home and barn, with a ferry-only access from Seattle, does not go as planned. Tragedy strikes. Surviving wars and bombs in far-off lands, Jack’s heart gives out in the US, and Sunny is left to grieve and make her way alone to the Screaming Peacock Vineyard which was to be their retirement home. Only it’s not, decides Sunny, at first horrified glance.

There are other interesting characters in the book, such as Candace, the classic rich, loud-talking, well-connected, attractive American socialite who puts her money to work to help women in Afghanistan. It is she who gets the much-coveted US student visa for Layla. Candace is willing to break the rules and, in perhaps the least credible of events in the book, organises a fake burial, pulling strings from the US, to save Zara, a young Afghan girl, from a forced marriage arranged by her family, to a much older, wealthy, powerful man. Zara, meanwhile, is in love with Omar, a fellow student and would-be political rebel. Unfortunately, like Juliet, while Zara is saved, Omar is killed by the jealous fiancÃ©e. So the theme of loss in the book is a constant.

It is, in part, Zara’s love for Omar that destroys the coffee shop as it is brutally attacked by the henchmen of the fiancÃ©e, who has her followed there, when she is going to meet Omar. His honour has been violated. Zara is critically wounded in the attack, as are many of the expatriate clientele in the packed coffee house. Many die. The cycle of loss is repeated. But there is redemption. From the ashes of the coffee house, comes a hugely important intervention: it is turned into a shelter for abused, dispossessed and destitute women and children, supported by Candace and others she bullies into donating money. Meantime, Sunny, surreptitiously egged on by Joe and Sky, is slowly “settling” into the vineyard and home. She sets up a bar/cafÃ© in the barn, called the Screaming Peacock. But she finds a way to link her new life with the one she had in Kabul by donating a portion of the proceeds from her American venture to the coffee shop shelter home in Afghanistan. And this is a move supported by the otherwise uptight Twimbly residents.

And so time passes, with lives and destinies intersecting at the strangest of places, and views changing. Initially, ignoring his newborn daughter following the norm, Ahmet in Kabul, suddenly has an epiphany; he feels a rush of love so strong, he makes a promise that henceforth he will devote his life and his energy to helping girls and women get the recognition and respect they deserve.

Not surprisingly, the book restates many of the standard stereotypes about women, their status in the current dispensation, etc. It is, at the end, a life-affirming, even if somewhat clichÃ©d story.

In many ways, the two coffee shop books, which are fiction, and the Kabul beauty school book which is said to be non-fiction, are based on the author, Deborah Rodriguez’s, own life and personality. Her life is stranger than the character in the book who resembles her — Sunny. Rodriguez is a trained hairdresser and beautician, who came to Afghanistan in 2001 as a humanitarian worker, but soon found that it was her skills as a beautician that were in great demand, as the Taliban had banned beauty salons during their reign of terror. She then decided to open a beauty school to train Afghan women so that they could, in turn, set up parlours of their own and get some financial independence. She opened a beauty school in partnership with her Afghan husband, Samer Mohammad Abdul Khan, who she married as a second wife in 2002, after knowing him for only 20 days and not speaking the same language. He works for the Afghan warlord, Abdul Rashid Dostum, the incumbent Vice President of Afghanistan. Rodriguez was married to Khan till 2007, when, for reasons unknown, she and her 25-year-old son from her first marriage, were smuggled out of the country, to escape her husband — and she has not been able to return since.

Fleeing from Afghanistan, Rodriguez tried, like Sunny, to “settle” in California for a while. She failed. She then decided to move to Mazatlan, Mexico, where she has set up Tippy Toes Salon and Marrakesh Spa and established Project Mariposa, providing funding for young women to attend beauty school and become self-supporting. And she repeated her success formula by writing another non-fiction bestseller memoir in 2014, Margarita Wednesdays: Making a New Life by the Mexican Sea ( also called The House on Carnaval Street), on her journey to remake her life after being forced to leave Afghanistan.

However, few people have turned time spent in a new country to the advantage Rodriguez has. The first book, The Kabul Beauty School: An American Goes Behind the Veil, was non-fiction, telling the story of how the school was established, with Rodriguez the driving force behind it. That view has, however, been contradicted by others who claim the book is mere self-aggrandizement and that others were equally involved in setting up the school. The claims notwithstanding, the book was slated to be made into a movie starring Sandra Bullock. Rodriguez also opened a coffee shop in Kabul and the two coffee shop books are said to be a genre of “realistic fiction.” Realistic or otherwise, one thing is irrefutable: the author is even more interesting than her books.