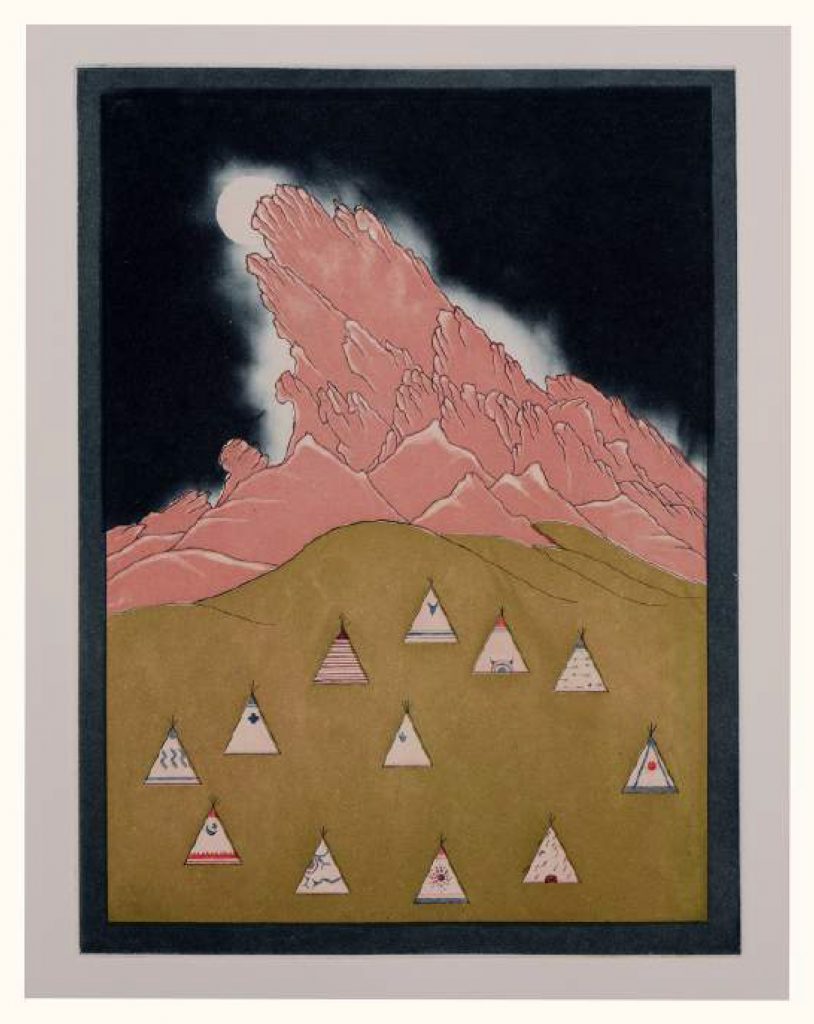 The independent way of life of the Native American peoples of North America, came to an end in a chapter as dark as the indigo-seeped skies in Murad Khan Mumtaz’s paintings.

In his recent show at Koel Gallery titled West, Mumtaz pays homage to the lost world of pre-modern America. The title alludes to an older, indigenous West that existed before the settler invasions destroyed the integrity of the old ways. West is a paean to an authentic way of life that has diminished under the onslaught of modernity. 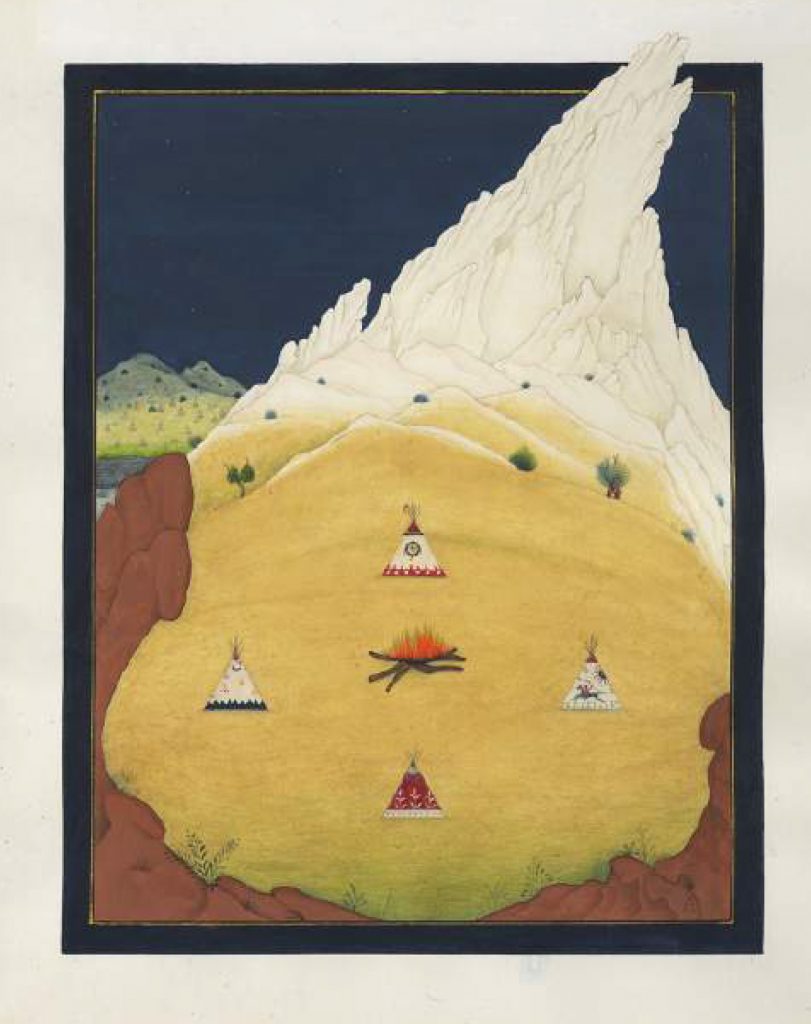 Mumtaz has depicted stylised landscapes of simplified forms and geometries through miniature painting. His delicate work evokes a lost world with great clarity — a dreamscape almost — as if recalled in a visionary state of mind. Symbiotic relationships and symbolic associations between land and people are celebrated by showing tepees placed in varying patterns within the landscape. Mumtaz has spent time among the Sioux, who inhabited the Great Plains area and the Pueblo Indians of southwestern United States. The evocative mood captured in each painting is a distillation of his personal experience. 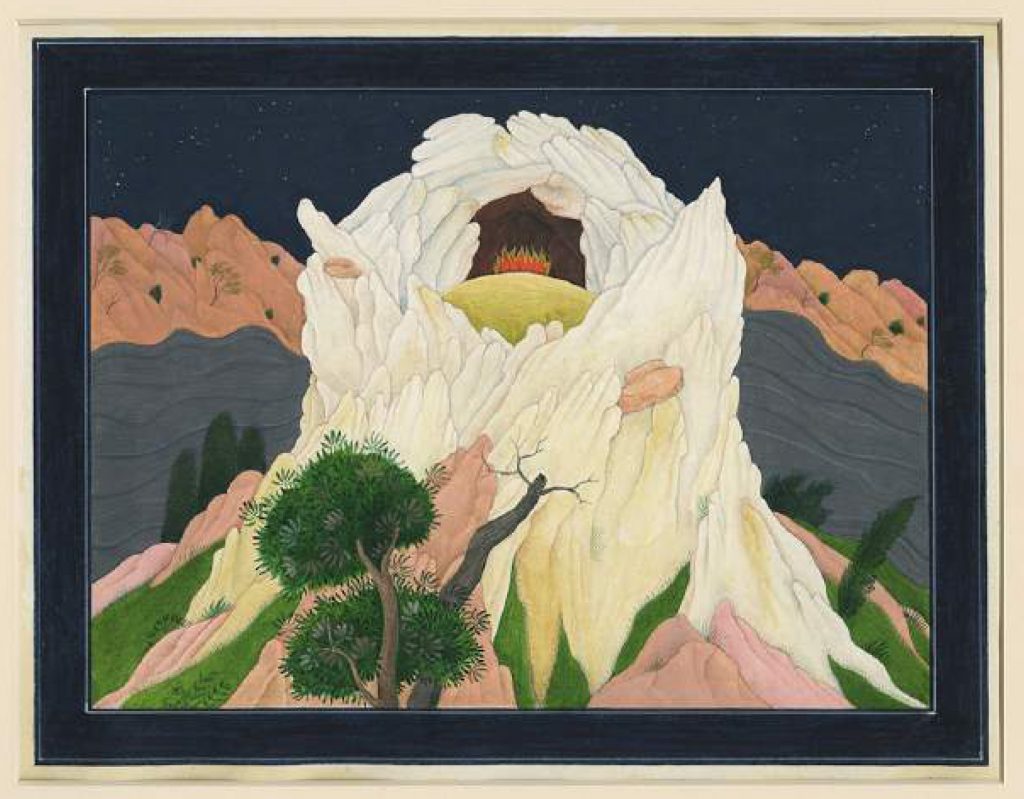 Mumtaz works in the North Indian miniature style of Pahari painting. He has brought about a union of two disparate geographies — North American Indian and subcontinental Indian — by this hybridization of subject and style. He started training in his craft in Lahore, and is currently engaged in achieving a PhD in Art History from the University of Virginia. 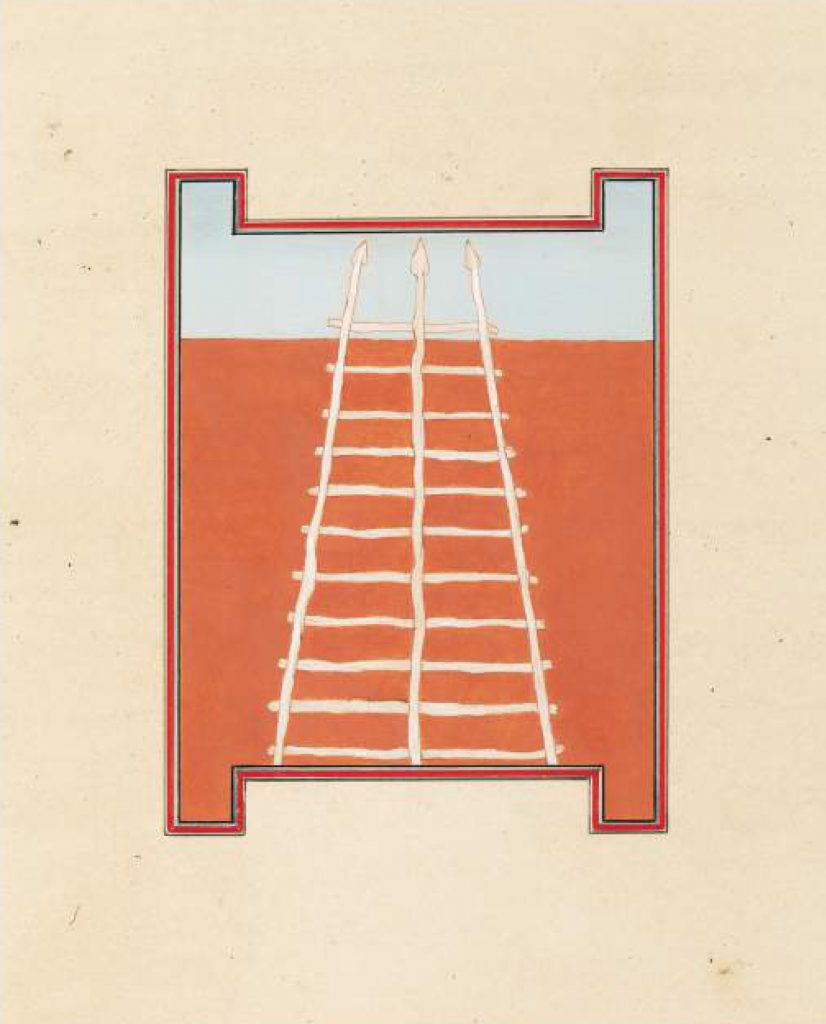 Pahari painting developed under the patronage of the Rajput kings of the Himalayan foothills in the eighteenth and nineteenth centuries. It was closely related to Mughal painting, but it focused on a bucolic Indian landscape and took its themes from Hindu mythology. Across the continents, as Pahari painting was maturing, the American Indian encounters with European traders and settlers intensified, precipitating the capitulation of the indigenous tribes to settler dominance. 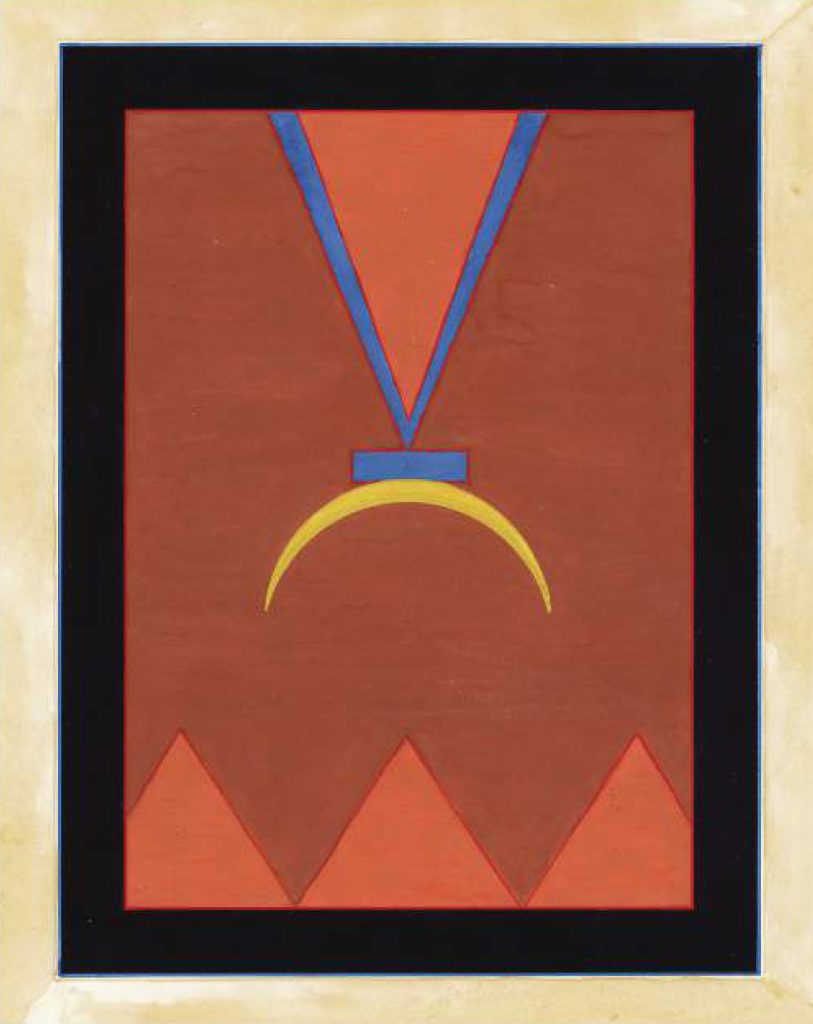 The later Kangra School of Pahari painting became one of the noted centres of production. The works were differentiated from other Pahari schools by the use of clean lines and effective use of negative space. Nainsukh of Guler (1717-1778) and his family were among the most eminent painters associated with the Kangra/Guler region. Mumtaz has closely studied this school and its characteristics are reflected in his rendition. He works with handmade wasli paper and uses natural pigments such as indigo, lapis lazuli, orpiment, ochre and gheru from the foothills of Islamabad as well as industrial pigments. 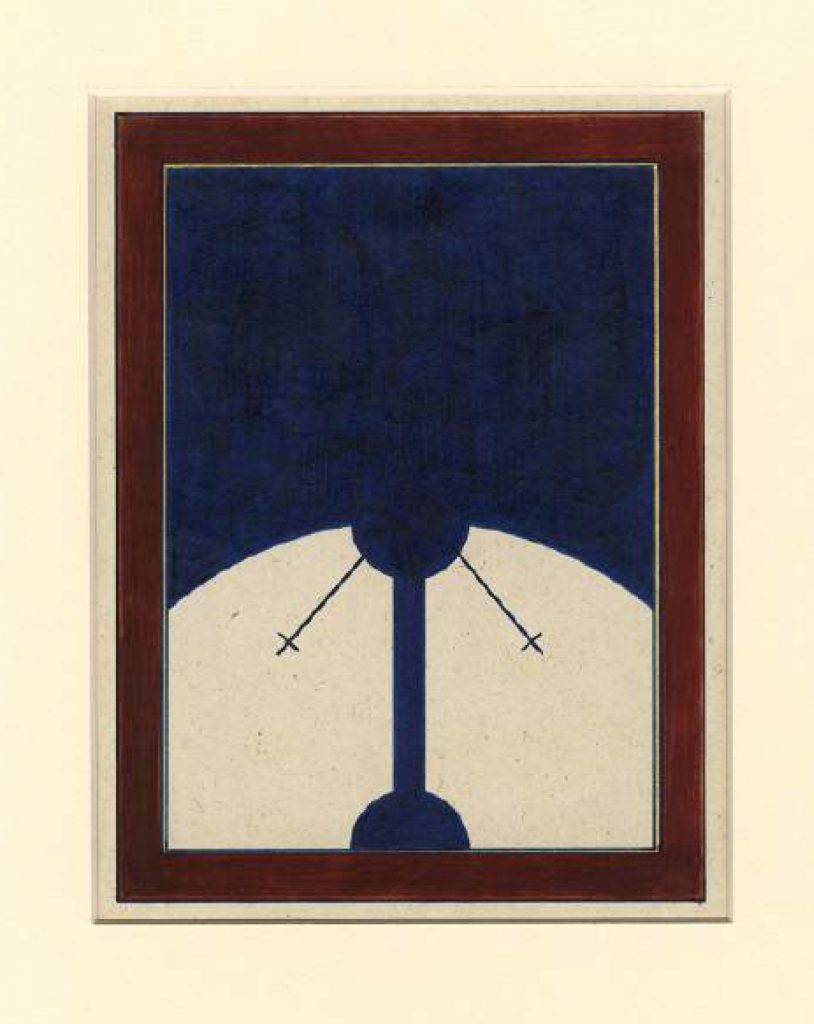 Whereas Pahari paintings almost inevitably included figures of people and animals, Mumtaz has made his paintings completely non-figurative. He focuses on an elemental landscape by deploying the use of negative space. There is the ground and the sky and often the two are separated by a thick layer formed by clouds as in ‘Crazy Men in Summer Night’ or a glow or misty substance as in the ‘Jalwah’ or ‘Khalwat’ series. Paintings such as ‘Vigil’, ‘Holy Well’ and ‘Revelation’ are so spare in detail that they become almost purely geometrical. Native American iconography is depicted in paintings such as ‘Summer’, ‘Winter’ and ‘Holy Well’. Some paintings such as ‘Moon When Cherries turn Black’ take their name from Sioux terminology for months of the year. Their ritual spaces are recalled in the painting titled ‘Kiva.’

A few paintings such as ‘In a Cave’ and ‘The Gathering’, show strong influence of the Persian/Mughal miniature style, particularly in the depiction of mountains which are drawn as curved outcrops that one may find in the paintings of the Shahnameh and other manuscripts. 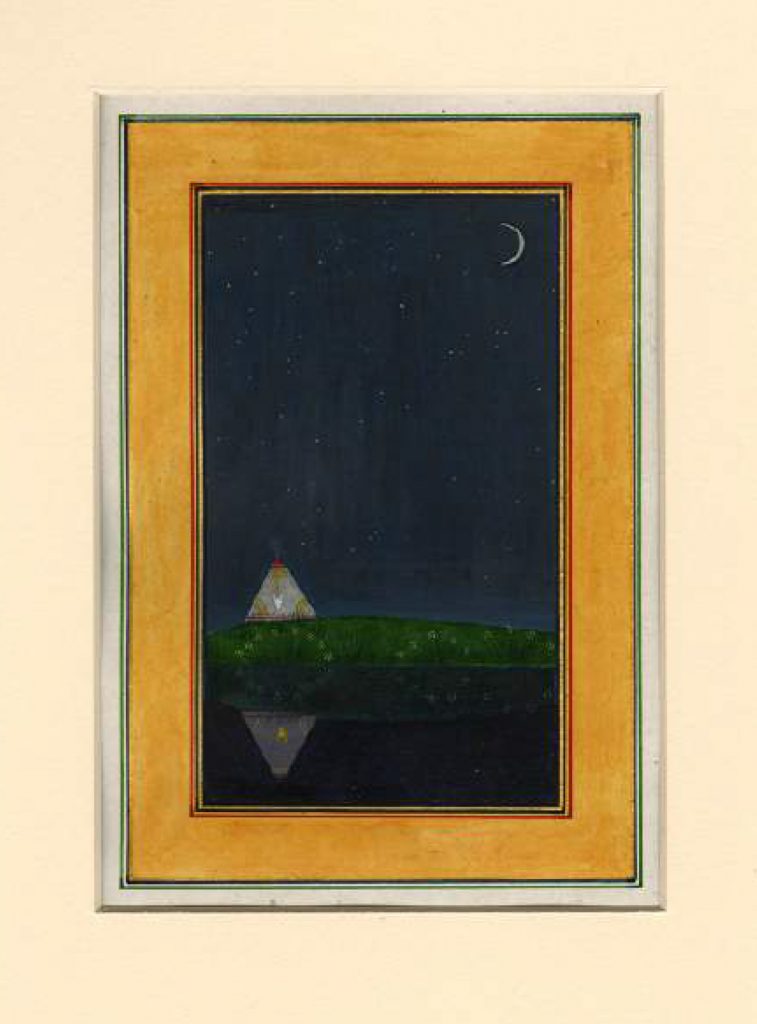 The absence of people, but the visibility of abode in the form of tepees, may be understood as a metaphor for disappearance. Although the individual paintings are not large, they depict a haunting vastness that hints at the mystery of old ways of dwelling in communion with the environment. Through his work, Mumtaz makes us encounter rich traditions in the context of the critical absence of the people who had created them in the first place.