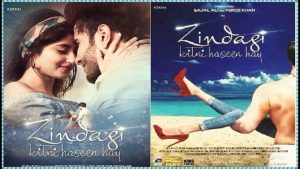 A misnomer if ever there was one, Zindagi Kitni Haseen Hai (How Beautiful Life Is) has the protagonists crying practically all the way through the movie; so actually, life is not so beautiful for them for most of their on-screen time!

Directed by Anjum Shehzad, who also has a cameo in the film, the movie has been scripted by Dr Abdul Khaliq, one of the film’s three producers. Considering that the story line borrows heavily from Hollywood’s Kramer vs Kramer and Bollywood’s Akele Hum Akele Tum, both of which were well-executed tear-jerkers, Zindagi would have benefited had some of the finer points of those movies been incorporated and the melodrama and masala, sprinkled in liberal doses in this version of the story, been played down. Surprisingly, despite the tears onscreen, Zindagi Kitni Haseen Hai fails to elicit tears from the audience.

The plot revolves around a young couple, Mahira (Sajjal Ali) and Zain Ahmed (Feroz Khan), who meet and fall in love — though there is total ambiguity and confusion regarding how that happens. In one scene they hate each other and in the very next, they are dancing and singing together. Time moves rapidly and – one son, Dodo, (Jibraiyl) and seven years later – you see the couple on the verge of divorce. From then on, the storyline doesn’t leave much to the imagination. A tussle for child custody ensues, and subsequently there are poorly acted and badly scripted court scenes. But after a whole lot of unnecessary melodrama, life turns beautiful once again.

Not so the movie. The editing is choppy, and the camerawork sloppy; there are frames in which you can see the hand of the cameraman, and the reflection of the camera lens. There is also little attention to detail – for example, which hospital ICU allows not one, but a whole row of floral arrangements, within its sterile environment? Not to mention glaring gaffes — it is established early on that Zain is an aspiring film scriptwriter. Yet, he is referred to by his wife and others throughout as a failed film-maker, as if the two professions were synonymous. Also, one fails to understand the film maker’s obsession with rain? There were at least five scenes in the movie showing a heavy downpour for no particular reason — when is Karachi blessed with so much rain?

The music of the film is supposed to be one of its strengths, but even with a voice like Sukhwinder Singh, it leaves little impact; the songs are, by and large, quite forgettable.

Mercifully, the film is not without some merit. The acting of most of the key cast members is competent, but Sajjal and Ally Khan (as a ratings-obsessed director of a morning show) are particularly impressive. The kid, Jibraiyl, is a great find and has acted well – sometimes too well, appearing precocious rather than endearingly innocent. Khan shows potential and Shafqat Cheema is at his menacing best. The fact that the cast is fresh, young and good-looking makes the film palatable, and the colourful sets and decent costumes also make for pleasant viewing.

Also, some pertinent issues have been raised in the film – the virtues of living together as a family; the ratings game that has resulted in soulless morning shows on TV; and the pitfalls of living beyond one’s means — but all these issues could have been handled more subtly. The dialogues show some spark — but only on the rare occasion.

All in all, Zindagi Kitni Haseen Hai is not the best Pakistani movie released this Eid, but it is not a complete write-off either.