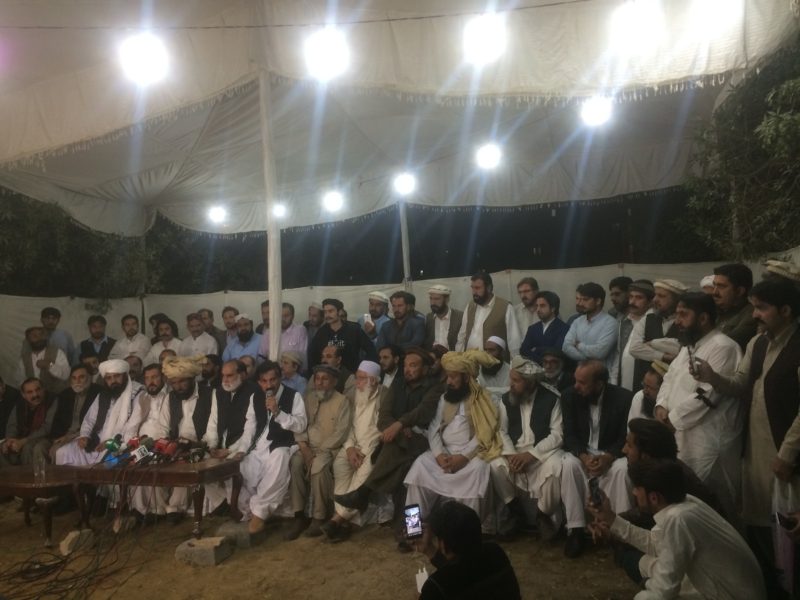 Press conference at a condolence camp for Naqeebullah Mehsud.

Pakhtuns living in Karachi have always been split, politically, among the mainstream political parties. There were numerous bids to bring them together as a unified entity, so as to reap maximum benefit from their sheer numbers in elections and in political agitation alike. In order to cobble together a broad-based alliance of Pakhtuns from different regions and tribal affiliations, the word ‘jirga’ — a term denoting a tribal assembly — was deployed. And in this manner, political jirgas were constituted.

At first, such attempts at unification came in response to specific issues, and with the aim of achieving short-term goals. But they were met with a mixed response. Furthermore, every time those in charge of such campaigns tried to use them to gain political leverage, it resulted in a split.

Take, for instance, two of the most prominent instances when Pakhtun jirgas have been constituted in the last couple of decades: the Riffat Afridi case in 1998, and the provincial and local governments’ attempts to ban rickshaws and old black taxis in 2006.

The Pakhtun Aman Jirga had emerged in 1998, against the backdrop of the famous Riffat Afridi case, when a 19-year-old Pakhtun girl from the Afridi tribe, whose family had been living in North Nazimabad, eloped with Kanwar Ahsan, a 30-year-old Urdu-speaking boy. The head of the relatively unknown Pakhtun Aman Jirga, Tariq Khan, a PML-N member, blew the issue out of proportion by accompanying the family to lodge an FIR against Kanwar Ahsan.

It turned into an issue that revived ethnic tensions in the city. Graffiti in support of Ahsan appeared in Mohajir localities, while a strike call by Tariq Khan resulted in violence, in which two people were killed and several injured. Two doctors were among those seriously injured when their car was torched by arsonists.

The jirga demanded that Ahsan be arrested and the girl be handed over to her family. The girl’s family claimed that she was already married to her cousin, but were unable to produce any documented proof of this. They claimed that the marriage took place according to tribal traditions and, hence, did not require any official documentation.

The court proceedings were followed by a split in the Aman Jirga, as one group was in favour of abiding by the court orders, while Tariq Khan insisted that the decision should be taken as per tribal traditions, under which, both Ahsan and Riffat would be sentenced to death.

The police managed to arrest Ahsan and produce Riffat in court. She was wearing her wedding dress and had defiantly testified that she married Ahsan of her own free will. The nikahnama and affidavit were presented to the court.

When Ahsan was brought to court and was entering the magistrate’s office, he was attacked by Riffat’s armed family members, including her cousin who claimed to be her husband. Ahsan received four bullets in his chest, abdomen and legs and was taken to the Civil Hospital. Luckily, he survived the attack, and later moved abroad with Riffat, after spending another year in hiding and applying for asylum.

The jirga became irrelevant in this situation and its agitation did not culminate in further rifts, as the MQM and the ANP leadership were not willing to let the issue get out of hand in those days. Later, in 2008, the most prominent character in that saga, Tariq Khan, was killed by unknown assailants near Tariq Road. The motives of the murder remain shrouded in mystery, and his role in the Riffat Afridi saga received little or no mention in reports.

The politics of the nationalist ANP took a turn when the late Ameen Khattak, a party stalwart in Karachi, was replaced by the president of the ANP’s Sindh chapter. The businessman-turned-politician, Shahi Syed, took an aggressive stance in comparison to his predecessors.

In 2006, the MQM-led city government and the provincial government, in which the MQM was a major shareholder, made moves to regulate informal settlements and public transport facilities in Karachi. This triggered an uproar among local Pakhtuns. Exploiting the outrage, Shahi Syed, formed the Pakhtun Action Committee (PAC), also referred to as the ‘Loya Jirga’ (Greater Jirga), to resist the moves.

The PAC did initially capitalise on the grievances of the people and demonstrated its public support through strike calls. A famous phrase coined by Shahi Syed in those days was, “I have the keys, and I can lock down the city.” But in the by-elections for local body constituencies in Baldia town, the ANP used its PAC clout to attract voters to the party. This resulted in a split and later the Jamaat-i-Islami came up with their own version — the Karachi Aman Jirga.

Syed’s political antics earned his party two provincial assembly seats and he became a Senator, but the political tensions culminated in the violent incidents of May 12, 2007, which brought the city under a new wave of violence, in which hundreds of people were targeted. Jihadi and sectarian militants have also contributed to the chaos that resulted in the decimation of the ANP, and the party is now a mere shadow of its past self.

Operations conducted by law-enforcement authorities (LEAs) to eliminate militants and dismantle the politically-backed networks of criminals bore fruit. Violence declined significantly, sectarian killings were reduced, and none of the political entities could resort to violence or arson, nor could they bring the city to a halt through strikes. On the flip side, excesses by the LEAs have resulted in public outrage, protests calls and criticism from human rights organisations.

It was against the backdrop of these woes that Naqeebullah Mehsud’s condolence camp in Sohrab Goth turned into a protest camp. For two weeks, thousands chanted slogans against then SSP Sindh, Rao Anwar, who allegedly shot Naqeebullah in a staged encounter. Driven by the widespread outrage against the murder, three Mehsud sub-tribes congregated at the camp in Karachi to form the Mehsud Jirga. Pakhtun tribal elders and senior members of political parties offered their support and addressed the crowd. Not only Mehsud tribesmen, but Pakhtuns from all localities were present, including families of missing persons — mostly female relatives — from all ethnicities. They came with the hope that their missing relatives would be taken notice of and recovered. 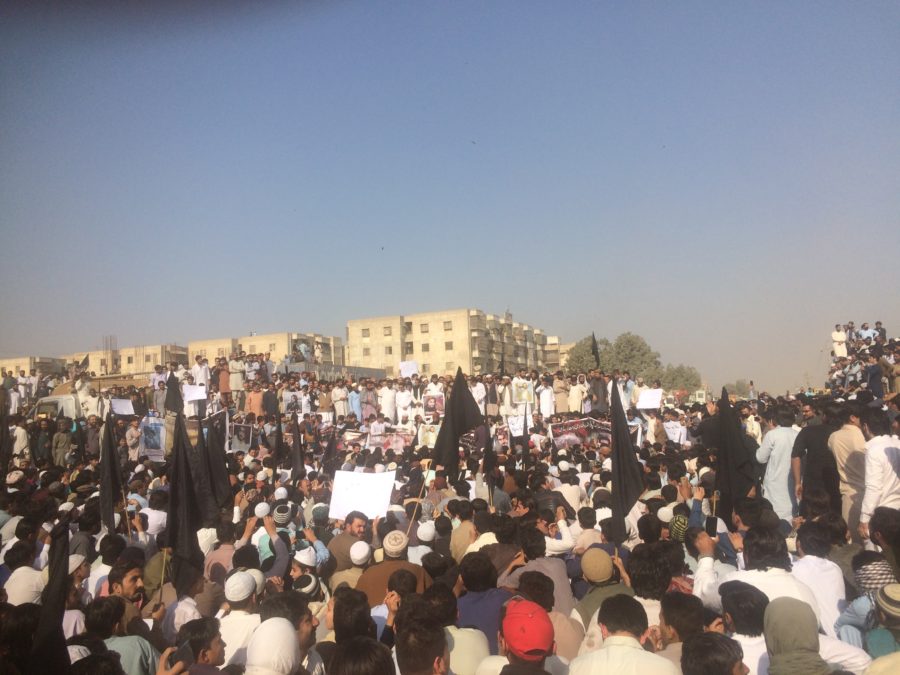 The condolence camp in Sohrab Goth

While Mehsud tribesmen are affiliated with a cross section of political parties — PTI, ANP and PkMAP to name a few — they came together under a single cause: to seek justice for the extra-judicial murder of Naqeebullah Mehsud and a hundred other such victims. The organisers did not let any single political party take over the stage.

The camp dispersed only after the Governor of Sindh and a delegation of the Senate Committee on Human Rights assured the tribal elders that justice would be dispensed.

Owing to the history of tribal jirgas, there was an impression that tribal elders could be lured into negotiations and that the issue would end once compensation was offered to Naqeeb’s family. Some newspapers and TV channels spread such rumours, but the scenario defied all the stereotypes regarding tribal Pakhtuns and their jirgas.

Naqeeb’s father maintained that since nothing, including any compensation, could bring his son back, and since the murder had been condemned by a cross-section of society, he would pursue the case till its end, until the perpetrators were punished. “My son has gone, but I want no other Naqeeb to meet the same fate,” he said.

The response to Naqeeb’s murder owes its magnitude to social networking sites. It was neither restricted to Karachi, nor was it restrained to the Mehsud tribe of FATA. Protests were held across all provinces and were joined by people from all ethnicities.

The protest camp turned into a collective voice of all Pakhtuns — from KP, FATA and Balochistan — who had come together to protest the murder, and also talk about their unending woes in the city. As representatives of all the political parties visited the camp, it started getting media coverage that encouraged people from other communities as well to bring their own issues to public attention. The protest continued for two weeks and ended with a visit by the Senate Committee on Human Rights, who assured the protestors of justice.

This massive demonstration and peaceful sit-in has helped in alerting political parties to the issue of extra-judicial killings, and has initiated a debate regarding the excesses of law enforcement agencies in conflict-ridden zones.

Karachi, a city that has largely been in the news for violence and crime, has shown signs of transformation — issues can now be highlighted and resolved without resorting to violence and disruption.