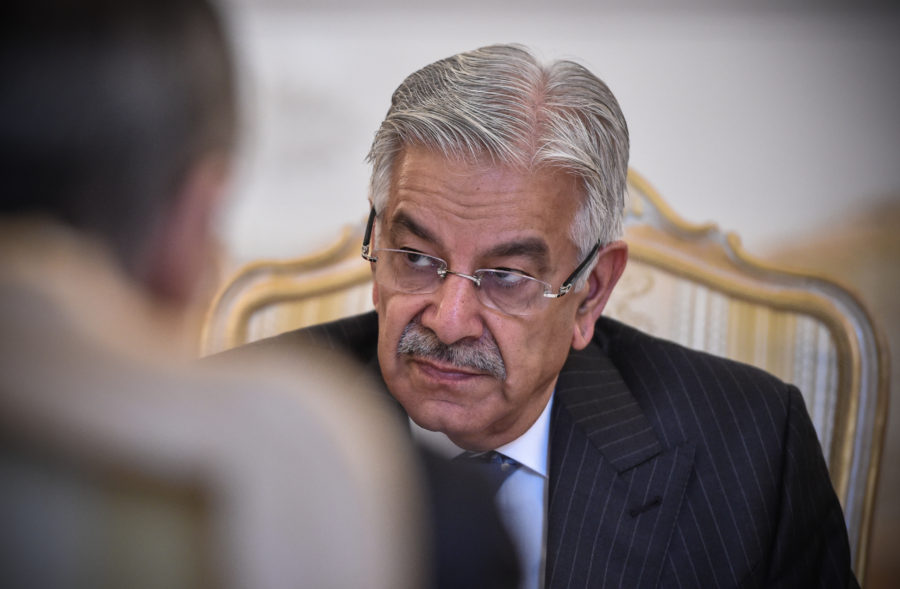 There might have been confusion at first, but reports at the end of the Financial Action Task Force’s (FATF) meeting in Paris last month, confirmed Islamabad’s worst fears. Pakistan is to be placed on the ‘grey-list’ for countries on the terror watchlist. It risks being blacklisted.

Not only is this in stark contrast to the triumphant tone of Foreign Minister Khawaja Asif, who in the middle of the summit decided to tweet that Islamabad’s “efforts have paid [off],” it has turned out to be a consequence of the inopportune statement.

Multiple diplomatic sources have confirmed that it was the premature reaction on the part of Pakistan, made even before the final list had been issued, that prompted a US-led follow-up meeting, which eventually established that Pakistan was going to be put on the grey-list in three months.

The list delineates the “jurisdictions with strategic anti-money laundering/countering the financing of terrorism deficiencies for which they have developed an action plan with the FATF.”

While Pakistan was not grey-listed last month, it will be placed there in June this year, along with Ethiopia, Iraq Yemen, Serbia, Sri Lanka, Syria, Trinidad and Tobago, Tunisia, Vanuatu and Yemen. Pakistan was last put on the grey-list in 2012 and remained there till 2015.

Islamabad has three months to convince the world — especially the US, Britain, France and Germany, that spearheaded the motion against Pakistan at the FATF — that it is doing enough not to be put on the blacklist, which only North Korea and Iran currently occupy.

“These countries — and India — wanted Pakistan do be immediately put on the grey-list, but there was no consensus. There will be another meeting in three months,” says political scientist Hasan Askari Rizvi, author of Pakistan and the Geostrategic Environment: A Study of Foreign Policy.

“The countries supporting Pakistan argue that putting it on the grey list isn’t the best way to go about it. They say engagement is needed. But what is now certain is that there are doubts over Pakistan’s counter-terror policies at the international level,” he adds.

Diplomatic sources, and reports following the FATF meeting, further confirmed that by the time the US led the follow-up meeting on putting Pakistan on the grey-list, it had convinced Saudi Arabia to stop supporting Pakistan; China also later abandoned its support.

“The US was adamant that Pakistan be put on the grey-list and had mustered support from Britain, Germany and France as well in this regard,” confirms a Foreign Office official. “Washington’s attitude in Paris was in line with its policy against Islamabad since the [Donald] Trump regime has taken over, where it has made it a point to target Pakistan at every instance.” Even before Donald Trump entered the White House, he touted Pakistan as the ‘problem’ and India as the ‘solution’ in his election campaign.

By the end of the second meeting, Turkey remained the only country opposed to Pakistan being grey-listed, prompting Interior Minister Ahsan Iqbal’s tweet, “Thank you Turkey for standing with Pakistan against all odds and proving that we are one. We are proud to have a brother like you.”

Ironically, the tweet clearly implied that no one else had ‘stood with Pakistan.’

“This is a diplomatic embarrassment,” says Rizvi. “If Pakistan is put on the grey-list, then individual countries would have the option to decide whether they want to trigger it or not. The countries can use it as a weapon against Pakistan.”

“The US will only do what’s in its interests and we should do what’s in ours,” says Shamshad Ahmad, former foreign secretary of Pakistan. “Also, if we think that China and Saudi Arabia would always bail us out, then we’re sadly mistaken. They would only continue to do so as long as it’s in their interests. In Pakistan, we unnecessarily put our hopes on others, because we’re so used to believing ourselves to be dependent on others,” he continues.

“Clearly, the US’s actions do not take into account bilateral ties with Pakistan; instead, they focus on the fast deteriorating conditions in Afghanistan,” says former foreign minister, Hina Rabbani Khar.“We’re seeing a full-fledged case of externalising the massive failure in Afghanistan on the shoulders of Pakistan.” While the US has been asking Pakistan to ‘do more,’ Khar says that Pakistan really wants the US to do more in Afghanistan as well.

“Under the watch of the US, terror networks have grown in Afghanistan, with larger spaces being given to the [Tehrik-e-Taliban Pakistan],” she says, adding that US officials are on record saying that “India is using the [Afghan territory against Pakistan]”.

Sources confirm that US Secretary of State, Rex Tillerson, was informed of Pakistan’s concerns with Indian use of the Afghan territory against us, when he met with civil and military officials at the prime minister’s residence in Islamabad in October last year.

“The Pakistani officials maintain that as long as India is eyeing a role in Afghanistan, peace along the Af-Pak border is difficult to achieve,” revealed a senior military official.

Ahmad concedes that the US is scapegoating Pakistan. “All US accusations stem from their own failures in Afghanistan,” he says. “It’s also a case of the US maintaining a strategic stalemate in Afghanistan so that they can continue to remain there. It is the backyard of Russia and China. So Pakistan isn’t the problem, the Taliban in Afghanistan aren’t the problem, it’s America’s China-driven agenda.”

Khar doesn’t buy the allegations against Pakistan either. “If Pakistan is to blame for the volatility in Afghanistan, then why don’t the US and other entities functioning there see to Pakistan’s request of manning the [Af-Pak] border better and fencing it? Since 2000, Pakistan has faced a disproportional level of terrorism, which has emanated from the other side of the border,” she says. “Scapegoating a country might be easy politics and good diplomacy, but it’s bad for peace and stability.”

“The world is watching Pakistan,” says former foreign minister, Khurshid Kasuri. “We are under observation. The world has changed after 9/11 — the policies of money laundering have now been extended to any activities that can lead to violence,” he says.

“Pakistan needs to put its act together. First and foremost, it’s in our own interests. Both the civil and military leaderships have agreed under the National Action Plan that these things need to be done,” continues Kasuri.

The Ordinance sanctioned Lashkar-e-Taiba (LeT) and Jamat-ud-Dawa (JuD), among the 27 UN-listed outfits in the country, as terrorist groups in Pakistan as well. The move was designed to forestall the grey-listing move at FATF, confirm government officials, a move which Rizvi believes “was taken at the 11th hour by the government to save themselves.”

Lieutenant General (R) Talat Masood, former secretary of the Ministry of Defense Production, says acting at the last minute and keeping things ambiguous was ‘typical’ of the government. “There is a need for transparency, and the government should clarify what is taking place on the counter-terror front.

“Grey-listing by FATF affects investments, and of course the political environment as well. It shows that the international community is not satisfied with Pakistan and has great doubts with regards to its policies. Also, it indicates that they no longer have confidence in Pakistan, or that they are under such external pressure that they feel it is not in their national interests to support Pakistan on this issue.”

Professor Shameem Akhtar, former head of the International Relations department at Karachi University, does not expect Pakistan to address any of its diplomatic troubles in the near future. “Considering that the entire government machinery is currently dedicated to fighting Nawaz Sharif’s cases, when would they find any time for productive policymaking?” he asks.