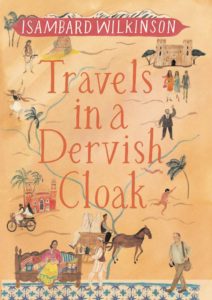 Pakistan has been a hard country; it has crossed swords and it has descended into chaos. How refreshing it is, therefore, to be gathered under the tattered folds of the dervish’s cloak with Isambard Wilkinson. This cloak — as Wilkinson reads in the 11th century mystic Data Ganj Baksh’s book — contains “the earth, sun and moon and all the stages of the path to truth.”

The cloak serves well as a metaphor for Wilkinson’s peripatetic discovery of the country. His account is divested of punditry. It relies on keen-eyed observation and immersion into the diverse milieus that contribute towards the “quiddity” of Pakistan.

He is what anthropologists describe as an ‘emic’ participant — one who investigates cultural norms from an insider point of view, and whose perspective is therefore richer in detail.

Wilkinson served as the foreign correspondent for the Daily Telegraph with his posting to Islamabad in 2006. But it was the long-standing friendship between two women that piqued his interest in the country and made his quest quite a personal one. His Anglo-Indian grandmother, whose family had lived in India from the 19th century, carried much memorabilia of India back to Ireland at the time of the Partition. She maintained her friendship with the redoubtable Begum Sajida Ali Khan of Lahore. Wilkinson’s first visit to Pakistan, at age 18, was to attend the Begum’s grandson’s wedding. She is a watchful guardian in his life, exhorting him to go in search of the “real” Pakistan.

With the rise of orthodox Islam and its pervasive influence, Wilkinson is driven to recover traces of a “time-wrought hybrid culture” amidst the realpolitik of “sifarish, networking and nepotism.”

The idiom regarding the devil being in the detail is spot on for the chimera that is Pakistan. Wilkinson’s forthright account of the fuzzy divisions between the land of Pakistan and the state of Pakistan reveal the tangled skeins of class and identity, of power and disenfranchisement, of the impact of politics that has carved the land as surely as geology has. He states poignantly: “Partition had left parts of this old land ethnically cleansed: as if a river had been diverted and left the puzzling remains of a civilisation by its dried-up course.”

Wilkinson’s writing is sharp, humorous and lyrically beautiful in his more reflective passages. Like Kalidasa’s Cloud-Messenger, Wilkinson’s “pootles” around the country in his search for the luminous and numinous, frequently encountering the ignominious.

His encounters with people make memorable reading. He succeeds in meeting Nawab Akbar Bugti, who hides in his lair with his books and his haughtiness. The Pir of Pagara, on the other hand, remains elusive. In Chitral, the 91-year-old Major Geoffrey Langlands — who ‘stayed on’ when Pakistan was created — punctually comes to dinner. The 95-year-old Khushwaqt ul Mulk, regales in a “sublime precinct of ancient walnut and mulberry trees.” The shenanigans of Allah Ditta and Basil — Wilkinson’s domestic staff — attest to the writer’s inordinate patience.

Travels in a Dervish Cloak covers the period between 2006 and 2008, but it is a recent publication. The writer acknowledges: “This book took criminally long to write and many people suffered in its making.” Wilkinson’s journalistic sojourn is bracketed between two kidney transplants. His brother Chev (who donates the second kidney) accompanies him on several journeys, and his presence in the book reinforces the strand of the family narrative which inter-weaves with observations about the country. Wilkinson’s bilateral status as an ‘insider-outsider’ gives authenticity to the many paths of truth that he traverses under the dervish’s cloak.