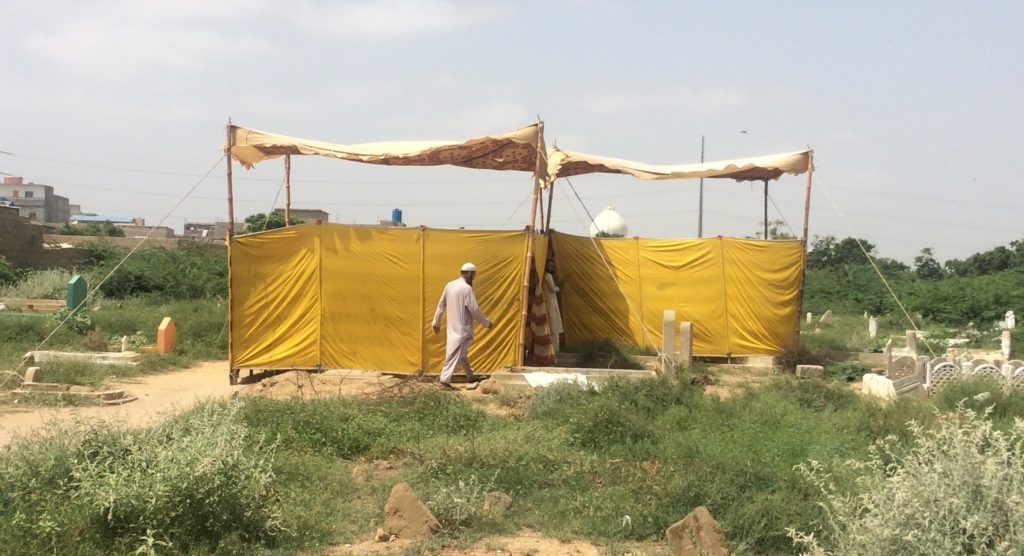 Sherpao Colony: Police exhumed the bodies of a teenage couple electrocuted to death on the orders of a jirga for postmortems.

Swat Pir Hotel, an eatery located along Hub River Road in Swat Colony, Baldia Town, Karachi, is a favourite haunt for gatherings and business meetings, where locals dine on the choicest beef, mutton and chicken karahi, along with barbecue items. The hotel provides open spaces as well as small rooms to visitors who need some privacy, mostly to discuss business matters. From evening till late night, both the wooden platforms set outside in the open air and its rooms are filled with visitors.

Amanullah Mohmand, a visitor who had accompanied his friends for dinner, says, “Most rooms are booked by businessmen who gather here to settle business disputes involving financial dealings, land disputes, or partnership issues. The two sides to a dispute have their own witnesses and there are mediators, all from the same tribe or clan, either Mohmands, Afridis, or Niazis, as the locality is dominated by these clans or tribes.”

The Pakhtuns, who have migrated from their native places to Karachi, have brought their culture and traditions to the urban centre. Among the aspects they glorify is the jirga, a traditional dispute resolution mechanism.

Haji Rehmanullah Safi, who belongs to the Safi tribe of Mohmand agency, has lived in Karachi for more than 40 years and runs a construction material business in Orangi Town. He explains, “People from all the seven agencies of the Federally Administered Tribal Territories (FATA) are knitted together in Karachi through tribal kinships, or social and economic relationships. People from my native place, Mohmand Agency, are mostly engaged in the business of construction material (thalleywallas), or firewood (taalwallas), hence for their supplies and credit facilities they are connected with each other. When any financial dispute arises, they prefer to have mediators from their own tribe because they understand the nature of business, and the unwritten rules. That’s how tribal jirgas work.”

He quotes a Pashto edict, “Da kalee na ba wuzey, kho da narkha ba na wuzey” (You can go out of the village, but cannot violate the settled principles.) Narkh, in Pashto refers to previous precedents in settling a dispute, as we see in the legal system when references are made to past court verdicts.

Family disputes are also brought to these jirgas, for instance the murder of a boy and a girl in the name of honour, last August. Haji Iqbal Afridi says, “The issue of honour comes up only when a girl is involved, whether she has a relationship of her own will with someone from her family, her own tribe, or someone out of the fold. In the first case, it is the family of the girl who would take action. If the girl has a relationship with an outsider, the whole tribe supports the family and stands by them in exacting revenge, or in tackling legal matters.” He referred to the Riffat Afridi case in 1998, in which the Pakhtun girl married an Urdu-speaking man, Kanwar Ahsan. The resulting dispute created political unrest and ethnic strife in Karachi. 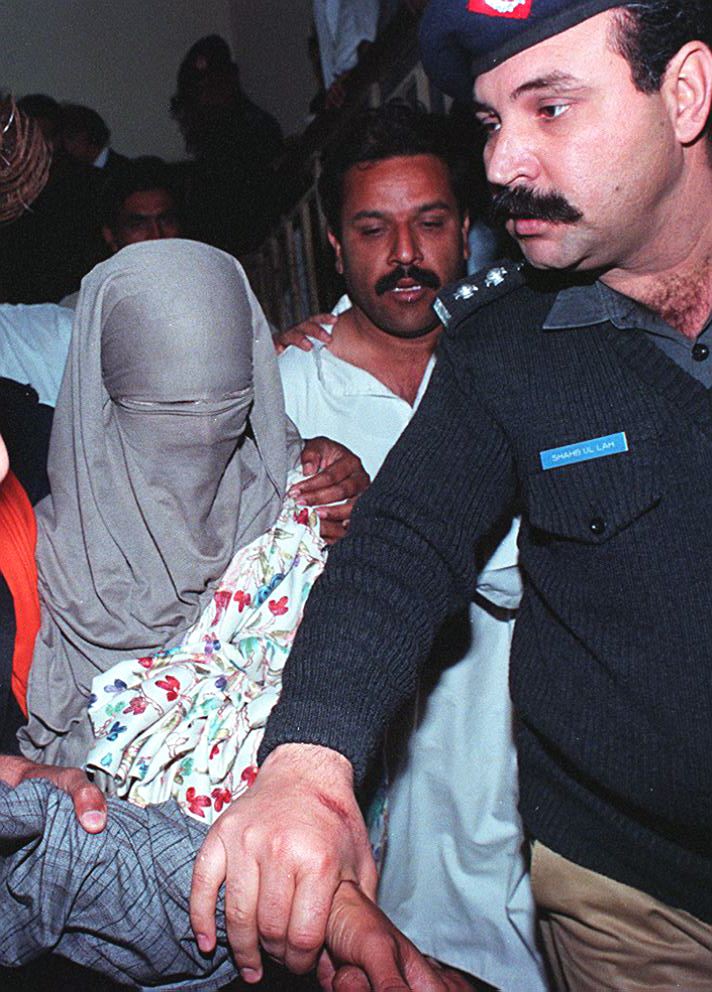 Bride of prejudice: Riffat Afridi being escorted to court by a policeman

Mohmand refers to two recent incidents, in the months of August and November 2017. The first took place in Ali Brohi goth near Ibrahim Haideri, in which the couple was killed by the girl’s uncle, along with other accomplices from the family, and buried in a graveyard without offering the last rites. The other case happened in November, when a family from Kohistan district killed a couple, who were cousins, and buried them in a graveyard in unmarked graves.

Amanullah Mohmand says, “These cases came to people’s knowledge after the media highlighted them, but there are many such cases in Orangi Town, Baldia Town, Korangi, Landhi, Gadap Town etc. In most, the unfortunate couples were killed in the same way and buried in unmarked graves. In some cases, in order to avoid legal complications, the girls were taken to their native places in FATA to be killed and buried there.”

The custom of resolving disputes through jirgas is common among different communities and ethnic groups across the whole region, and is given different names, such as jirga in Pashto, panchayat in Punjabi, or faislo in Sindhi.

These bodies have always come under criticism for their regressive practices, patriarchal structure, and for issuing anti-women orders, implemented through brute force, transcending legal bounds. The jirga, termed a parallel justice system, makes a mockery of the laws of the land instead of imparting justice.

In 2012, a three-judge bench headed by Justice Chaudhry, on identical petitions filed by Anis Haroon, then Chairperson of the National Commission on the Status of Women (NCSW), and activist and film-maker, Samar Minallah, against the Vani and Swara customs exercised through jirgas and panchayats to settle disputes, termed holding of jirgas against the Constitution.

On February 18, Awami Tehreek and Sindhiani Tehreek organised protests against faislos (jirgas in Sindh) and criticised the PPP government in Sindh for its failure to eliminate the parallel jirga system and its inhuman and anti-women practices, despite the PPP’s 2013 manifesto vow to eliminate it.

Despite these grave issues, the federal government approved an Alternative Dispute Resolution (ADR) bill in 2016 to give constitutional cover to the jirgas and panchayats. It was termed a bid to formalise the system and bring it in sync with the legal framework of the country. Women parliamentarians and civil rights activists have expressed their reservations regarding women’s representation in these bodies, and demanded preventive measures to stop them from continuing anti-women practices.

In a country where jirgas comprising elders and candidates from political parties gave a decision against women’s right to vote, it is not clear how these parallel bodies, even when placed under legal cover, could be restrained from pursuing their legacy of acting against women under cultural or religious pretexts.Despite its questionable verdicts, the traditional jirga still serves as judge and jury in both financial and personal disputes.