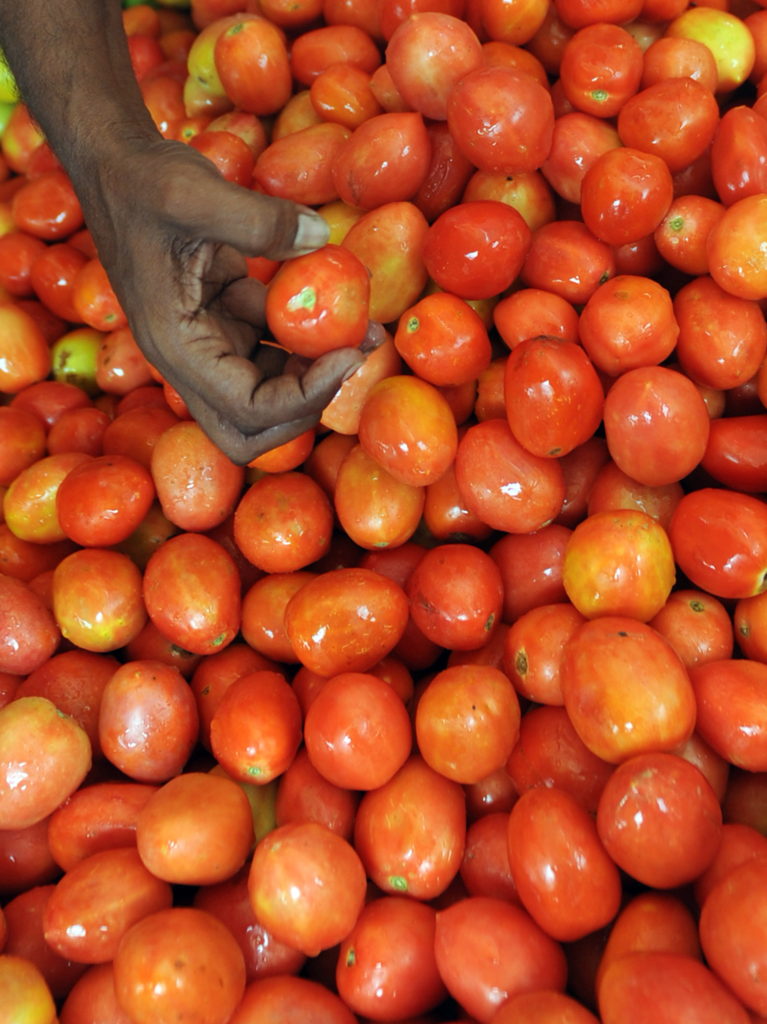 “As God wills,” is Raj Veer’s response to any and every query about uncertainty in the vegetable market. Twenty-six-year-old Veer, and his brother, Heera Lal, are tomato retailers who run stalls at Jumma bazaar in Gulzar-e-Hijri, District East, Karachi. They purchase up to 40 crates at a time and earn Rs 800 to Rs 1000 rupees on each.

Haji Badshah, a vegetables commission agent who has been in the business since 1976, reflects that although the recent astronomical hike in tomato prices “Could be due to excessive rains, which impacted tomato-producing regions, no one could have predicted it as the prices had remained low this year even in the month of Ramazan and during both Eids.” The price of tomatoes in Karachi, currently Rs 90 to Rs 110 per kilogram, had risen to Rs 180 per kilogram in September.

But prices do not rely solely on climatic conditions. Every player in the supply chain tries to safeguard his or her own interests by raising or lowering prices. Amidst the boom and bust cycle of tomato prices, benefits are shared by all, including the grower. But if the price falls, the burden shifts on the growers. Hence, the market glut eventually ends with the grower being punished for bringing his produce to the market in a period of low prices.

According to Abdullah Jan, a grower from Lasbela district in Balochistan, “The distributor gets a 10 per cent commission on sales, and benefits whether supplies are short and prices are high, or whether there is excess supply and prices are low. The cumulative average of commission on sales remains the same. In the peaks-to-trough decline in the market,” continues Abdullah, “it is the grower who has to incur losses.”

Taj Muhammad Barich, a tomato dealer in Lasbela district says, “If a grower incurs losses due to low prices, he usually chooses not to cultivate tomatoes the following year.” Supplies, he says, are affected when many growers make this decision. “It is a periodical occurrence” he adds, “coming every alternative year. The year of losses is followed by low cultivation, hence increased demand and rise in prices. In such a scenario, more farmers would choose to grow tomatoes. This leads to a bumper production which, in turn, causes a market glut.” He referred to the year 2016, when growers in Lasbela couldn’t recover their costs of production and suffered losses. But in 2017, when rates increased in the months of March and April, they made huge profits, and repaid their loans of previous years.

Prolonged winters, or scorching heat during cultivation or harvesting seasons also disrupt supplies. Yusuf Kakar, a distributor and co-owner of Muhammad Hanif and Company, explains that there are some grave misconceptions regarding the distributors’ role in price hikes and the fact that they benefit from these. “The tomato is not a vegetable which can be hoarded for more than a couple of days,” he says. “It takes one or two days to deliver it to the market. The prices rely heavily on the arrival of trucks from the area of harvest; the lower the supplies, the higher the prices.”

Kakar explains, “Karachi has an approximate requirement of 35,000 to 40,000 crates a day which amounts to 350 to 400 metric tonnes. Trucks arrive in Karachi from distant places like Peshawar, Qilla Saifullah, Khuzdar, Lasbela, Thatta and Badin, depending on harvesting seasons. It’s that difference in supplies that affects prices. Trucks loaded with tomatoes start entering the mandi every night around 9 pm and it goes on till early morning. The earlier the truck comes, the greater the chances of getting better prices.”

After the produce makes it to the mandi, wholesalers, locally known as masha khor, purchase it in bulk to supply to their clients. The nature of clients varies, from food chains, hotels, and eateries, to departmental stores and markets in residential localities.

The masha khors compete at auctions to acquire their purchase targets. When lesser numbers of trucks make it to the mandi gates, the competition becomes more arduous, resulting in a price hike. Most of these masha khors are provided credit facilities by the commission agents. Those having contracts with food chains, restaurants, or eateries, are financially stable and are able to achieve their purchase target by competing in a higher price market for better quality of produce. Hence, they play a vital role in the price hike and influence the market.

The small retailers who supply the produce to the majority — domestic consumers who are mostly women — from their stalls in bachat bazaars, or by going door-to-door with their pushcarts, go for the lowest quality and lower prices, and take advantage of the frenzy over increased prices.

The benefits of the price hike are shared by commission agents and big wholesalers but, this too, has its own share of disadvantages. Syed Abdul Malik, alias Shah Jee, owner of the Gul Muhammad and Wali Muhammad Company, vegetable commission agents in Quetta’s sabzi mandi, complains that the price hike results in an increase in credit to masha khors, requiring more capital to meet the demand.

“No one shares the risk with us” says Malik, “And if the market crashes, and the growers incur losses, that too affects us, as we provide them financial assistance from the time they start cultivating their lands, purchasing seeds and pesticides, and paying for manual labour hired for the cultivation process.”

The province of Balochistan, which contributes almost 50 per cent to tomato production in Pakistan, is faced with chronic water shortages and electricity shortfalls. Electricity shortfalls from 16 to 20 hours a day forced growers to look for alternatives, and led to increasing use of solar panels to power tubewells.

Qilla Saifullah, the Balochistan district with the highest share in tomato production, and its adjacent regions is faced with depleting water levels. Groundwater in these parts is lowering at an alarming annual rate of three meters.

Reliance on hybrid seeds, the use of pesticides and chemical fertilisers have only added to the cost of production. Even if conditions are favourable in the year following a market crash, it would not be enough to lift the debt-burden off the shoulders of growers.