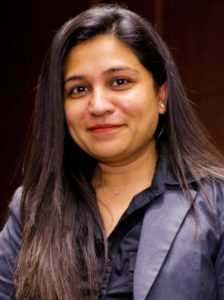 Dr. Qurat ul Ain Khan is Pakistan’s first American Board certified and trained dementia specialist, and focuses on research of Neurodegenerative dementias and Cultural Psychiatry. Working to eradicate misconceptions and create a much greater awareness about this issue, she has established Karachi’s first and only dementia support group. She has conducted panel discussions regarding myths about the prevailing belief in “jinn possession” and mental illnesses.

Dr Qurat did her residency in General Psychiatry at Chicago Medical School, and then went on to do a fellowship in Behavioral Neurology and Neuropsychiatry from the Mayo Clinic in Jacksonville. Licensed by the American Board of Psychiatry and Neurology (General Psychiatry) and the United Council for Neurologic Subspecialties (Behavioral Neurology and Neuropsychiatry), she went on to join the Aga Khan University Hospital (AKUH) as an Assistant Professor in 2013 and has been working there ever since as a researcher, academician and clinician.

Working at the Aga Khan University Hospital (AKUH), you are dealing mostly with patients from the middle or upper income bracket. What percentage of those, would you say, have Alzheimer’s?

Research in this area is not really at par with international research, as no prevalence studies have been done so far. What we know in Pakistan, in Alzheimer’s disease, is that prevalence and incidence are directly related to age. So incidence doubles every five years after 60-65 years of age. We also know that patterns, risk factors, prevalence and incidence are significantly different in lower and middle income countries — the developing countries — than the developed world. That is why there is a separate research group developed now, Alzheimer’s Disease International (ADI) which is called 10/66 DRG (Dementia Research Group) — which is basically promoting Alzheimer’s related research in the developing world. There’s a lot to do. I just started out with a standardised battery test in Urdu to diagnose dementia in Pakistan, because currently we do not have any tools for the diagnosis of dementia. So my first assignment is the data collection for this study, of translation, validation of 10/66 Dementia Diagnostic Battery (the standardised test for diagnosing dementia) in Pakistan. We do not have the exact prevalence figures. In any part of the world, it ranges from 2-12 per cent; in low income countries it may be around 5-6 per cent after age 65. We collected data on 259 people, with or without memory problems, in different communities in Karachi, and the treatment gap means about 90-95 per cent of the people who have dementia, are not even aware they have it; so they don’t reach out for help.

What sets Alzheimer’s apart from dementia and run-of-the-mill forgetfulness?

For the general public, it is important to know that the most common symptom of Alzheimer’s is short term memory loss. What leads to a lot of confusion among people about this disease, is that the older memories remain intact (till the later stages). Those affected can often vividly remember what they did 30 years back, but can’t recall what they ate last night, or keep asking the same question repeatedly. Difficulty in multitasking or in performing complicated tasks, and personality changes, are all symptoms. In Alzheimer’s, people don’t have physical or neurological symptoms, like other dementias, such as Lewy Body Dementia, where people have difficulty in walking, experience tremors, shaking of their hands, an unstable gait, and complaints of bladder and bowel control issues. This may happen later on in Alzheimer’s, but not initially.

Ageing is not a disease. It is a natural process. When you were younger, you were able to multitask more easily than at age 60 or so. Processing speed, your reflexes, the speed of your responses, all this may get affected with age.

As a specialist behavioural neurologist, how many patients do you come across that have Alzheimer’s?

Being a behavioural neurologist, I specialise in all kinds of cognitive impairments, anything that may have symptoms of neurological or psychiatric issues. People don’t know that there is a behavioural or memory-focused clinic that exists at the AKU. We don’t really get a big chunk of patients — I see about 5-7 patients a week. We’re trying to set up a memory clinic, to address their problems, to identify those who are misdiagnosed, or manage their (initial) misdiagnosis.

Recent studies have shown that there’s a link between Type 2 Diabetes and Alzheimer’s. How credible is this? And how would it affect Pakistan’s research considering that it’s only now that people are coming to terms with Type 2 diabetes and obesity problems?

There is a lot of research taking place in this area. It is now well established that vascular risk factors affect mental health; meaning that anything that causes your heart to become weak, can cause mental health issues. Hypertension, diabetes, cholesterol, smoking — all of these things may affect mental health. Because we do not have any curative treatment for Alzheimer’s, scientists are now concentrating on the preventive approach.

Speaking of preventative measures, what does that entail?

Physical exercise of at least 150 minutes a week (about two-and-a-half hours), and following, as closely as possible, the Mediterranean diet: low cholesterol, polyunsaturated fats, white meat, yogurt, cheese, oil, milk. Physical exercise is essential as it promotes cell formation. It prevents cognitive decline and degeneration of brain cells. It is ideal to exercise till you go above your normal heart line, that is, if it is 80, it goes to 120, provided you don’t have any heart issues or problems with physical exercise. Cognitive exercises that keep your brain busy include playing computer games, scrabble, bridge, or reading literature, the Qur’an, or praying. Lifestyle changes are very, very important in prevention of dementia. There is a survey we did on dementia that will be published soon, in which we explored activities people engage in; we met with people in a public awareness event and handed questionnaires for them to fill out. A lot of them said they just sit and watch TV.

I’m guilty of that myself!

Me too! I think besides the prevalent culture, there is a lack of resources. For women, it is more restrictive, as people don’t approve of women jogging or walking on the streets or roads. I do think that workplaces can take some of the responsibility for promoting a healthier lifestyle by providing a safe place where their employees can just walk or jog. Higher education and a mentally stimulating job and home environment may also help prevent Alzheimer’s, because when you have stronger circuits, or more cognitive reserve, your brain is stronger.

So this would defeat the perception that more intellectuals get dementia then?

Yes! I don’t think they do.

Has stem cell research found a cure for preventing or curing Alzheimer’s?

Are there any alternate cures for Alzheimer’s, for instance, cannabis or natural medicine?

Not really! There are two FDA-approved medications we use to treat dementia. One is for mild to moderate stages, and the other is for moderate to severe stages. If anything, it may help slow down the progression of some symptoms. Some medicines may be helpful symptomatically, for Lewy Body Dementia. But once the process starts, we cannot reverse it.

How long would you say is the lifespan of an average Alzheimer’s patient?

Alzheimer’s is a slow, progressive dementia and may span 15-20 years. It starts very gradually. Scientists can intervene in the earlier stages, as there is a lot of research in the preventative area.

How do people typically react when a member of the family is diagnosed with Alzheimer’s?

Family members often get offended when you suggest that their relative may have some kind of dementia, and request you to not discuss it in front of the patient. It has to do with our culture. Sometimes it takes a while for them to come to terms with, and understand, the disease. In a study, we were trying to assess the caregiver’s burden, and a lot of caregivers completely denied feeling burdened. In a cultural context, they think it’s their duty to take care of family members with dementia, despite the emotional, financial and physical burdens, or changing family dynamics.

That must make it difficult for compliance since families are supposed to report symptoms, changes in behaviour etc. Do people overcome the initial denial and follow up?

There is a certain chunk that does, especially for patients with physical symptoms; tremors, incontinence. Generally, most families minimise reporting of Alzheimer’s symptoms, even in moderate to severe cases, so a lot of the information received from families is unreliable.

What can people do to increase awareness and support measures?

We have very limited resources but I started a support group with a Facebook page (https://www.facebook.com/dementia.supportgroup.pk/), and a Healthy Ageing page (https://www.facebook.com/healthy.aging.pk/), to promote awareness, to explain the symptoms and share caregiver burden-related material on the page. The support group gets together at AKU, free of cost, and I post the timings on the Facebook page, SMS and e-mail people. It’s very important to address the stigma related to this disease.

Is there anything else that people should know about Alzheimer’s?