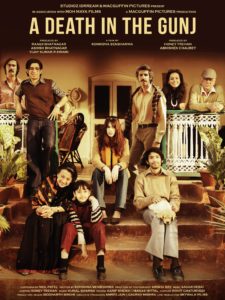 Halfway through Death in the Gunj, after a game of kabbadi between two of the male characters takes a violent turn, a character casually describes the incident by using the oft-used phrase ‘boys will be boys’ — a phrase that has become almost insidious in its stated nonchalance, a phrase that promotes a very narrow and harmful concept of acceptable masculine behaviour. It is these toxic forms of acceptable masculinity and the pain that results when men are unable or unwilling to conform to these stifling codes of behavior, which is at the heart of a film written and directed with incredible skill by the actress Konkona Sen Sharma. Based on a short story written by her father Mukul Sharma, which in turn was inspired by true events in his own youth, Death in the Gunj is a quiet reflection of the ways in which a patriarchal South Asian society fails its men.

Set in 1978 in the small hilly town of McCluksiegunj, a part of India which had a significant Anglo-Indian community, the film opens with a disquieting scene of two men outside a morgue trying to fit a corpse in the trunk of a car, and then driving away to Calcutta. From there, the narrative flashes back to a week earlier, at the start of such an Anglo-Indian family’s road trip. Nandu (Gulshan Devaiah) is driving his wife Bonnie (Tillotama Shome), his eight-year-old daughter Tania, and a childhood family friend, Mimi (Kalki Koechlin) to his parents’ house. Tagging along is Nandu’s cousin, the quiet young man Shutu (Vikrant Massey) who, we learn, has lost his father and, as it becomes more and more obvious to the audience (but, crucially, not to the other characters), is grappling with his grief with tremendous difficulty. At the family house, the group is reunited with Nandu’s parents (Om Puri and Tanuja), and Nandu’s two childhood friends, Vikram (Ranvir Shorey) and Brian (Jim Sarbh), and the childhood trio quickly fall into macho displays of masculinity, with the sensitive Shutu immediately becoming the focus of their aggressive teasing and bullying.

What comes across most clearly in the main narrative, and in the smaller subplots that surround it, is how ill-equipped men are to clearly articulate their own emotions, let alone provide emotional support to each other. In one of the main subplots, Vikram, who has recently gotten married, quickly resumes a previously unfinished affair with Mimi. It is something that the observant Shutu immediately picks up on, but which Nandu takes a while to register. Even when he does, both men find themselves at a loss for words and quickly change the subject. It is clear that their camaraderie, which is based entirely on a certain concept of masculinity (cracking lewd jokes, swearing, drinking excessively, insulting one another aggressively), cannot provide them with the vocabulary to talk about anything meaningful going on in their lives. This inability to acknowledge and articulate difficult emotions extends to the way all the characters, specifically the men, react to Shutu’s pain, which Massey expresses masterfully in his nuanced performance. Upon learning that Shutu, a usually brilliant student, has failed his MSc. exams, none of the characters ever consider doing anything beyond teasing him or ordering him to do menial household tasks despite knowing that his father’s death must weigh heavily on him. In a particularly disturbing scene, Nandu stumbles upon Shutu one night clearly distraught with grief and pain — he is crying and banging his head against the wall, and seems to barely be conscious — and even though Nandu clearly seems concerned for his cousin here, he merely leads him back to his bed and tells him to go back to sleep.

As the film progresses, Shutu attempts to conform to the standards of masculinity he sees displayed around him in different ways, in an effort to fit in with the group of men that so obviously treats him with disdain. But whether it is sneaking away to ride the family motorbike, entering into an ill-advised sexual relationship with Mimi, or trying to beat Vikram in an aggressive game of kabbadi, Shutu’s feeble gestures towards the masculine behaviour being modelled around him all leave him lonelier and in greater pain, and the film’s narrative effectively heightens the audience’s discomfort at witnessing him get closer and closer to the brink, especially as the film’s prologue has already indicated that a tragedy is inevitable. By critiquing toxic masculinity and the way it intersects with the particularly South Asian tendency to sweep difficult emotions such as grief and mental health issues under the carpet, instead of acknowledging them, A Death in the Gunj is a subtle film with an urgent message.