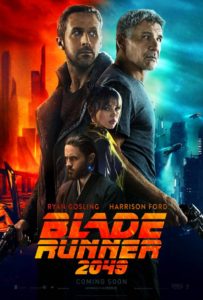 “Dying for the right cause is the most human thing we can do,” may be a sensitive proclamation today, where the threat of a suicide attack is constantly looming on the horizon. But in the dystopian Los Angeles of 2049, it is mankind’s rallying cry of survival. This is only one example of how Blade Runner 2049, Denis Villeneuve’s artistic, abstract creation, has little time for political correctness. Another is the treatment meted out to women. If they aren’t attractive-looking software programmes that can be switched off faster than a smartphone, they are manhandled remorselessly. At the same time, lone-wolf protagonists, high on the opium of martyrdom, attack convoys of the establishment.

We learn at the start of the film that the Earth’s ecology collapsed in the 2020s and has been replaced by cosmetic rural landscapes of smooth white sheaths that fit together like giant pieces of a puzzle. These are vast shelters that provide insulation for synthetic farming. If viewers wonder why the film’s depiction of the future is conceptually similar to the sort commonly envisioned in the 1980s, it is because what we are seeing is a 30-year progression from the civilisation portrayed in Ridley Scott’s original Blade Runner. And it looks increasingly Third World.

Yet there is more to this grimy metallic grey of dreariness than meets the eye. The protagonist, ‘K’ (Ryan Gosling), is a ‘Replicant’ (an android created using biotechnology) and LAPD detective, tasked with eliminating all older models of Replicants. While carrying out his duties, K accidentally stumbles upon a discovery that provokes him to ask fundamental — and potentially dangerous — questions, eventually leading him to Rick Deckard (Harrison Ford).

As we become familiarised with K during the first half of the film, part of us hopes that there is some semblance of ‘feeling’ within his bioengineered form. There is something human, almost uncompromising about K’s aloofness. His lazy eye hints at possible trauma and repressed feelings. This physical imperfection is particularly visible in an iconic scene at the start of the film, when he is flying to the LAPD headquarters and leading us through the metropolis of the mid-21st century for the first time.

In 2049, corporations no longer attempt to conceal their ruthlessness and are run by eccentric scientists and inventors. Niander Wallace (Jared Leto) is the head of the Tyrell Corporation, which specialises in the manufacture of androids. Leto’s performance as the arch villain is menacing, but his dialogue, vaguely poetic and filled with riddles, is pretentious at times. One gets the impression that he is trying to compete with Marlon Brando’s Colonel Kurtz from Apocalypse Now.

The trailer may be misleading in creating an impression that the soundtrack is filled with the synth-based sounds of its predecessor, whereas in actual fact it sounds more like a futuristic Nine Inch Nails. Hans Zimmer had big shoes to fill and has, in all fairness, met expectations. The film’s dark, brooding visuals give it a melodramatic and soulful core; there is very little that is ‘mainstream’ about it.

The only worry is that the ending has been left open to a possible follow-up. Another instalment may spread thin the mysterious and otherworldly appeal of this masterpiece. Some questions are best left unanswered.