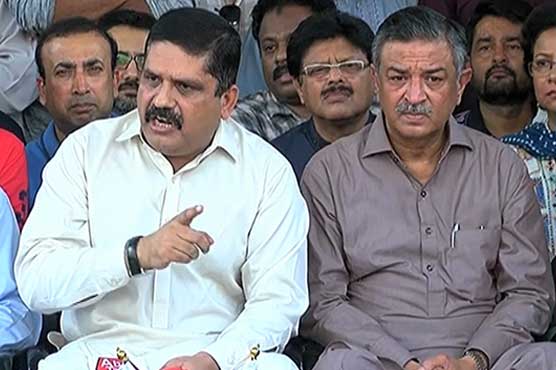 Arshad Vohra (left) announces his decision at a press conference.

Signs of weariness are clearly visible within the ranks of the Muttahida Qaumi Movement Pakistan (MQM-P). Following on the heels of other prominent party members, its elected deputy mayor Karachi, Arshad A. Vohra, has also defected to Mustafa Kamal’s Pak Sarzameen Party (PSP).

The party’s original sins are surfacing to haunt its lawmakers and active workers. An application demanding a ban on the party due to lack of transparency in generating and expending financial resources, accompanied by accusations of receiving foreign funds, scores of workers behind bars facing criminal charges, dozens of missing workers, and the crippled powers of local government bodies have compelled the party support base to seek other options.

Vohra is the latest addition to the list of MQM-P lawmakers and elected representatives to join the PSP. His defection, however, is more significant, as he was elected after August 22, when the MQM leadership parted ways with party founder Altaf Hussain, to form the MQM-P with Dr Farooq Sattar as party head. The elections for mayor and deputy mayor were held on August 24. The Farooq Sattar-led party passed its first test when elected MQM representatives turned up and voted in favour of then imprisoned Waseem Akhtar, electing him mayor and Arshad A. Vohra, deputy mayor, Karachi.

Serving as the deputy mayor for 14 months, Vohra seems to have realised just recently that the elected representatives have failed to perform. He apologised to voters for not delivering results, despite being in power. Vohra admitted that they could have delivered with whatever resources they had available. He alleged that the party, led by Farooq Sattar, lacks vision and termed this the main reason for leaving the MQM-P.

Whatever the reason behind Vohra’s defection, his complaints regarding the MQM-P’s lack of performance cannot be overlooked. The lack of resources complaint might be a valid political argument in the context of limited powers ceded to the local government (LG) bodies, but voters can also spot the inactivity and lack of interest on the part of MQM-P local bodies’ representatives.

The problem lies in the organisational chaos within the MQM-P ranks, as a majority of active workers are either behind bars, or have gone into hiding; some of them have stopped participating actively due to fear of arrest. There are many who disagree with the party’s post-August 22 strategy, and reiterate that the party should have decided to face the music instead of bowing under pressure.

One troubled worker said, “They gained breathing space for themselves, but gained nothing at all for the party workers and voters from their decision to dissociate themselves from the party founder, amid claims of reinventing the party.

“When families of imprisoned workers approach them, they say these sufferings and hardships are part of the struggle, but they couldn’t withstand pressure for a couple of hours, and quickly dissociated themselves from the party founder.”

He continued, “It’s the worker who has always faced hardships; many were forced to join the PSP, hoping that it could get them out of trouble.”

Commenting on Vohra’s decision to join the PSP, political analysts suggest that it came after his name, along with other MQM-P lawmakers and businessmen, appeared in the money laundering FIR registered by the Federal Investigation Agency (FIA) against MQM founder, Altaf Hussain, and his accomplices, in the beginning of October.

Sarfaraz Merchant, the UK-based businessman, was among half a dozen suspects interrogated by Scotland Yard in the UK for their involvement in money laundering along with Altaf Hussain, but the charges were dropped last year due to lack of evidence. Merchant approached the Pakistani authorities with an application demanding a ban on the MQM, accusing them of receiving foreign funding.

The four-page application provides details of persons, bank accounts, and channels used for sending money to Altaf Hussain. It alleges that funds of the Khidmat-e-Khalq Foundation (KKF), the charity wing of the MQM, were sent through the accounts of individuals associated with the MQM, and companies run by them, to Altaf Hussain and the UK headquarters of the MQM. The application names Arshad Vohra, Khwaja Sohail Mansoor, (the MQM MNA), and his brother Khwaja Haris Mansoor, along with a few others who were involved in fund transfers. 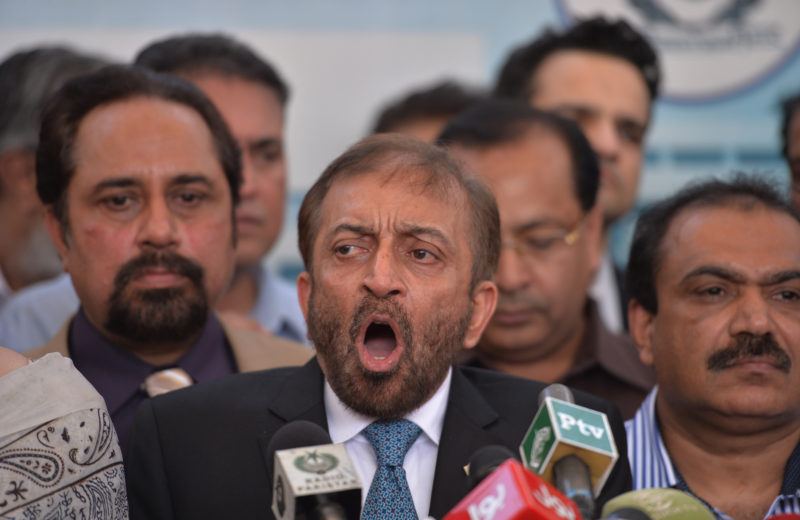 The FIA converted the application into an FIR and started an investigation. Toby Cadman, Sarfaraz Merchant’s lawyer, who visited Pakistan recently, claimed to have given a copy of the FIR to the London Met Police, to ask them to reconsider their position on money laundering charges against Altaf Hussain and others.

On October 27, Pakistan Today reported, while citing unnamed sources, that Inter-Services Intelligence (ISI) asked the FIA to shift the case to Islamabad, to avoid political interference and draw upon the help of forensic experts.

These developments may have contributed to Arshad Vohra’s decision to defect from the MQM-P and join the PSP, which MQM-P leaders call the ‘dry-cleaning factory’ for MQM-P lawmakers and workers who face legal issues.

Vohra’s decision posed another challenge to Dr Farooq Sattar, who had threatened to resign from parliament if lawmakers were pressurised to quit the party and join the PSP. After consultation with the co-ordination committee, it was decided that the federal government would be approached to ask them to provide political space to the MQM-P, as promised, while seeking MQM-P support for Shahid Khaqan Abbasi’s election as Prime Minister.

It’s not clear though, how the federal government could come to their aid. The prime minister had, in a meeting with an MQM-P delegation on October 18, asked Interior Minister Ahsan Iqbal to look into their complaints. Iqbal visited Karachi and held a meeting with the MQM-P delegation on October 27 at the Governor’s House. The statement released by the Governor’s House said, “The city’s development projects, steps for further improvement in law and order, rehabilitation of infrastructure, solid waste management, and conducive environment for investment in Karachi, were among the matters that came up for discussion during the meeting.”

MQM-P members, though, insist that their complaints regarding pressure on their lawmakers and workers to quit the party, the issues faced by imprisoned workers, and the agonies of the families of missing workers were part of the discussion with the interior minister, and he has promised help. One MQM worker said, “If these issues couldn’t even make it to the official statement, there’s little hope that they will get any serious consideration.”