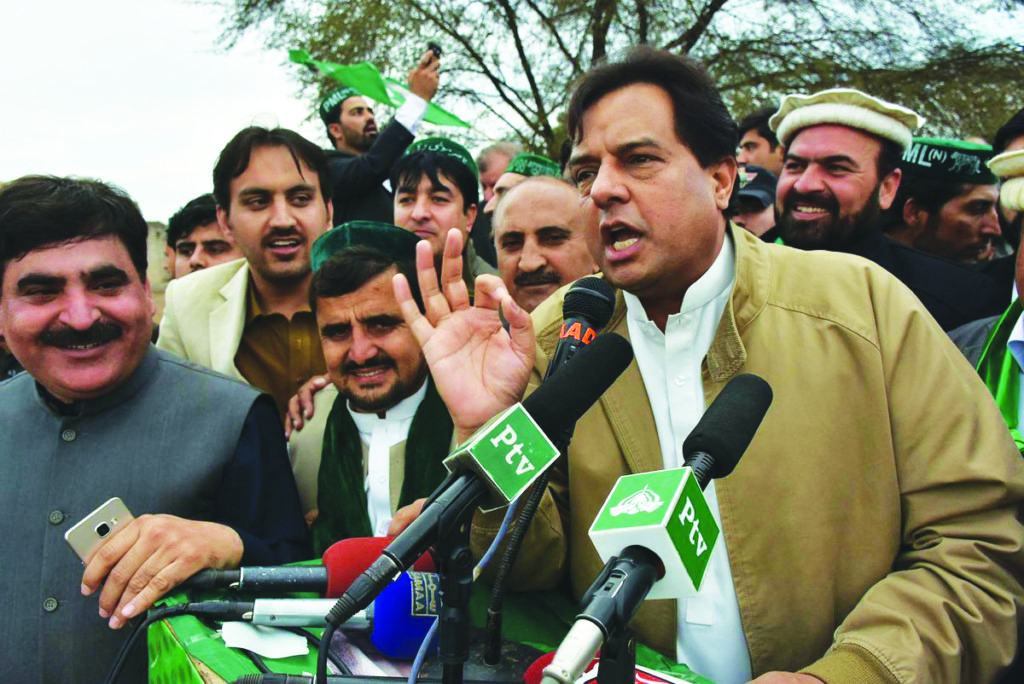 This year’s annual Khatm-e-Nabuwwat Conference (October 19-20) couldn’t have asked for a more perfect timing. While the gathering was, as usual, held at Chenab Nagar’s (Rabwah) Muslim Colony, a locality usurped from the Ahmadiyya community, it came a little over two weeks after the National Assembly adopted the Electoral Reforms Bill, 2017, allowing ousted Prime Minister Nawaz Sharif to take charge of the ruling Pakistan Muslim League-Nawaz (PML-N), once again.

The bill had altered the phrasing of the election nomination papers, from a candidate “solemnly swearing” that they believe in Khatm-e-Nabuwwat to its “declaration.” Furthermore, clauses 7B and 7C of the Conduct of the General Election Order 2002, which sanction a supplementary voters’ list for Ahmadis by demanding declaration of belief in Khatm-e-Nabuwwat, was also conspicuously missing.

While the clauses were reinstated in the nomination papers, what followed for the next couple of weeks was a mass slander of the Ahmadiyya community.

The most notable of these was Captain (R) Safdar using the National Assembly, hours after being arrested by the National Accountability Bureau for failing to appear in the accountability court over corruption charges, to launch a tirade against the Ahmadis, demanding their ban from the Pakistan Army and the Atomic Energy Commission.

Earlier, Jamiat Ulema-e-Islam Fazl (JUI-F) Chairman, Maulana Fazl-ur-Rehman, had said that anyone even deliberating over the Khatm-e-Nabuwwat clause would be “digging his own grave.”

So with the atmosphere rife with bigotry, the stage was set in Muslim Colony for dozens of clerics and politicians to promote the already state-sanctioned apartheid of the community, under complete security provided by the local police spearheaded by the DPO, Captain (Retired) Mustanser Feroze. 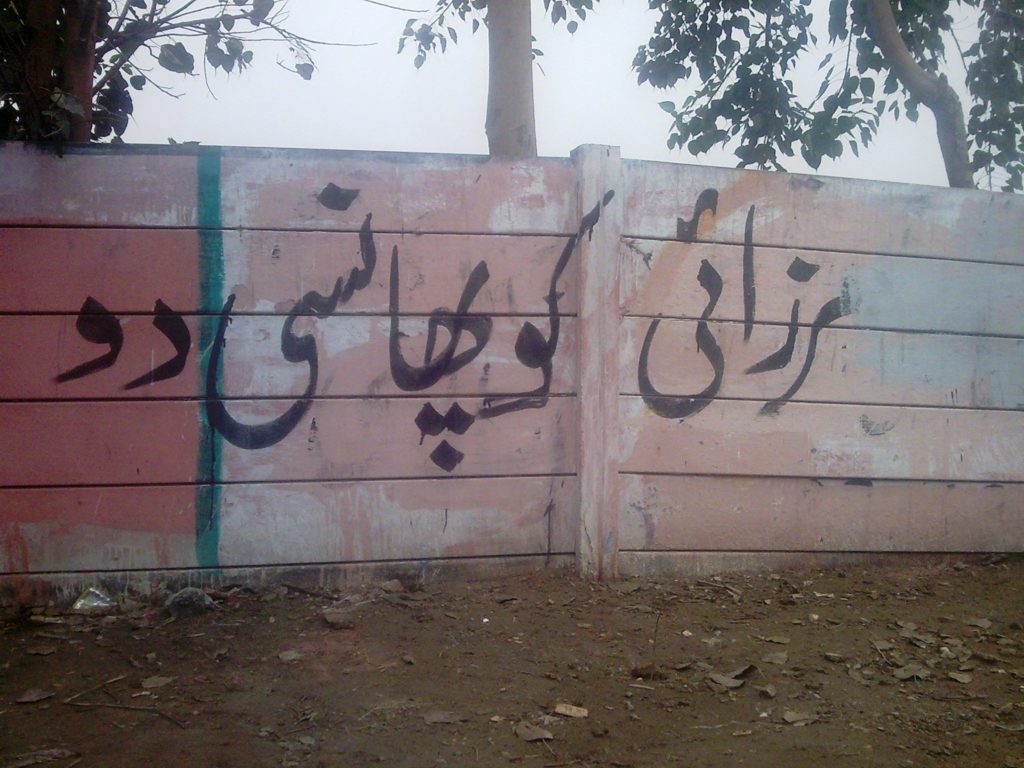 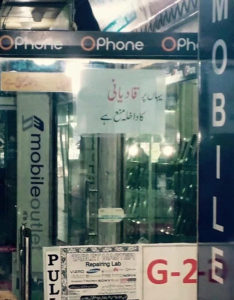 Taking full credit for the restoration of Articles 7B and 7C, Fazl-ur-Rehman said he had thwarted the conspiracy of the West and the US. “The enemies of Islam want to eradicate the Khatm-e-Nabuwwat clauses to serve the Qadiani (derogatory term for Ahmadis) agenda with the backing of America,” he said.

Jamiat-e-Ahle-Hadith’s Ibtisam Ilahi Zaheer said, “Qadianis are being paid by the US to defame Pakistanis, while the European countries reward them on the basis of these fabricated reports.”

Milli Yakjehti Council President, Abul Khair Muhamad Zubair, maintained that all prayers are null and void without a belief in Khatm-e-Nabuwwat, adding that all Muslims are willing to lay down their lives to safeguard Pakistan and Islam by “putting Qadianis in their place.”

The conference passed a resolution asking the Punjab government to lift its ban on posters against the Ahmadiyya community, completely eradicate Ahmadiyya literature, restore the Khatm-e-Nabuwwat clauses — which has already been done — and sack the Punjab Law Minister, Rana Sanaullah, for his ‘pro-Qadiani stance.’

The last demand was included after Sanaullah had reacted to Capt (R) Safdar’s National Assembly speech by underscoring the commonalities that the Ahmadis shared with Muslims on a TV talk show. He later backtracked, declaring the Ahmadis the ‘greatest threat to Islam.’

On the morning of October 18, a day before the Khatm-e-Nabuwwat Conference began, Jibran Ahmed, a 23-year-old Ahmadi resident of Mughalpura and a law student, saw a banner across Shalimar Link Road that said, ‘Qadianis and insulters of the Prophet (PBUH) are infidels and not from among us.’

“There is no time of the year when there isn’t animosity against us, but since the omission of the Khatm-e-Nabuwwat clause has been so openly deliberated, it has increased many times over,” says Jibran. “The separate voters list, the Constitution sanctioning our faith — these are not breaches of the Constitution itself, these are actions of an apartheid state,” he adds.

Amir Mehmood, incharge of the Ahmadiyya Media Cell, says equating Ahmadis with blasphemers in a banner on such a prominent Lahore route was an open invitation to murder.

“There was a National Action Plan once upon a time, which banned hate speech, but these open invitations for violence against us have never counted as such,” he says. “Meanwhile, our literature, that we keep within our libraries, has been banned under the label of hate speech.”

“The most shameful aspect is that all the while our community was the target of brazen incitement to violence, not a single TV channel came forward to take our viewpoint,” he says. “The things that you’ve been accusing us of, completely contradict our own faith and yet nobody wants to be corrected. This can only lead to more fatal accusations of blasphemy against Ahmadis.”

That is precisely what happened a day after Capt Safdar’s rant in the National Assembly when three Ahmadis — Mubasher Ahmad, Ghulam Ahmed, Ehsan Ahmed — were sentenced to death by a Sheikhupura sessions court over blasphemy.

“Sweets were distributed in the locality and it was reiterated on loudspeakers how Ahmadis are wajib-ul-qatl, when the death sentence was announced,” says Yasir Ahmed, a cousin of the three accused sentenced to the gallows.

Yasir recalls that when his four cousins — one of whom, Khalil, was shot dead in prison — were first arrested over blasphemy, every single Ahmadiyya house in the locality had to be vacated.

“They were all set to torch each of the 13-14 houses that we have in the village,” Yasir says. “And they would have done so, had we been home.”

The sessions court’s verdict has been challenged in the Lahore High Court, and is being fought by Advocate Umer Farooq, who has been threatened with ‘dire consequences’ for defending the ‘enemies of Islam.’

“Since I’m not an Ahmadi, the mullahs feel I’m betraying Islam. They have threatened me and asked me to drop the case,” Farooq says. “I won’t lie, I was intimidated and even told my clients that I would be giving up on the case. But their tears and their helplessness, since no one was willing to defend them, made me rethink. Allah, after all, is Rabb-ul-Alameen, not just Rabb-ul-Muslimeen.”

“The hatred that was visible on the street has now reached the National Assembly and high courts,” says Amir Mehmood. “But the worst bit is that beliefs that have nothing to do with Ahmadis are being attributed to us, just to declare us blasphemers and wajib-ul-qatl.”