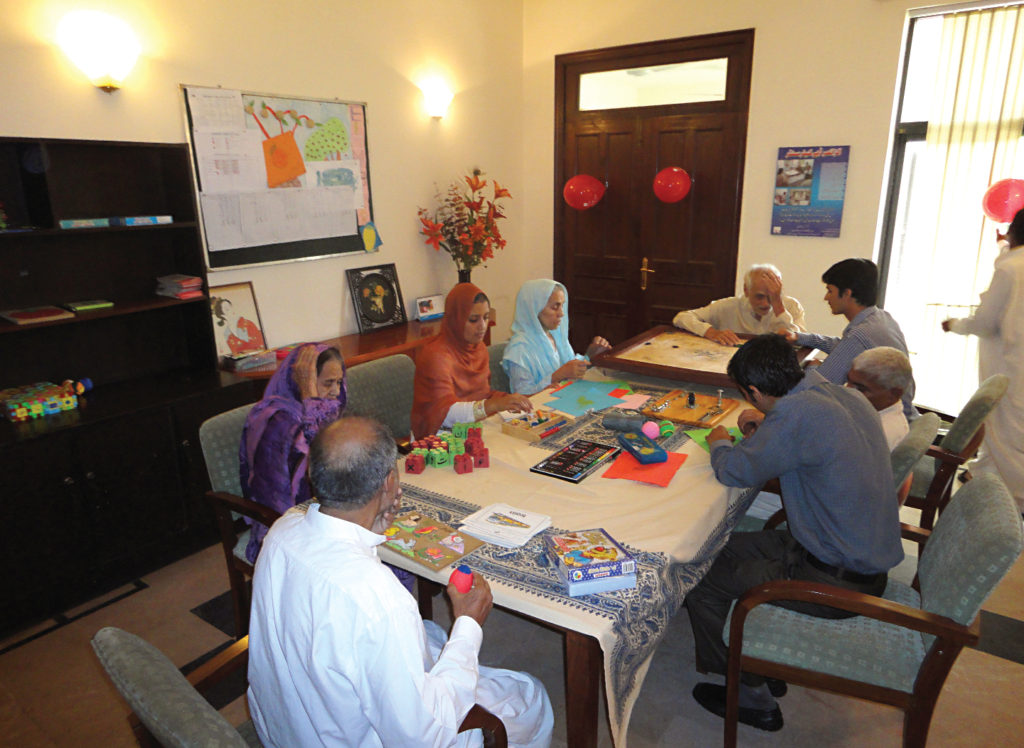 Caring for someone with Alzheimer’s Disease (AD) or dementia can be a very stressful and emotional journey. But three sisters — Sadia, Lubna, Arsh — undertook that task with efficiency and remarkable aplomb in Karachi when their mother was diagnosed with Alzheimer’s early 2015. Not immediately though. It took trips to different doctors and several tests, to reach a definitive diagnosis. And that was really the hard part. The sisters were shocked when one doctor asked their mother to draw some things and then asked her to write her name. She couldn’t. They had not realised she had lost so much memory, so many skills. “Yes, she had started forgetting things some time back, and started remembering the past more clearly, but we put that down to the normal getting-old process,” said Sadia, the eldest.

Unlike most other debilitating illnesses, AD is generally a slow onset process and, as one doctor told Sadia, evidence now shows that the first changes in the brain can start occurring as early as 15 years before the person exhibits symptoms of dementia. Incidentally, pointed out Lubna, dementia and AD are not the same, as the doctors explained to them. “Dementia is a syndrome, not a disease and is an overall term to describe symptoms that affect memory, daily activities and communication abilities. It is just an umbrella term that AD falls under,” their doctor elaborated. Apart from learning the scientific terms and the stages they could expect their mother to go through, the sisters found the day-to-day challenges (despite being three of them, living in the same city within a few kilometres of each other, and able to afford live-in help), hard to cope with.

It required a change of lifestyle for all of them. Sadia said at first they thought getting in female staff to help look after their mother would solve the problem. It didn’t. The sisters were beginning to realise what caregiving to an Alzheimer’s affectee entailed. Arsh said they did a lot of research online on AD when their mother was diagnosed, and read about the loss of reasoning ability, loss of memory and language, loss of decision-making and navigation skills, and inability to take care of themselves. But, she says, “It was still a terrible shock to see someone so vibrant, even at 82, to go downhill so fast. My mother had cooked and managed the house and had always been a very independent person. She rebelled when we insisted she sit in a wheelchair, as her walking became weaker.” What really made her angry though, was when her daughters bought adult pampers for her. “We told the helpers to put them on at night, and it was a battle. My mother felt we were infringing on her privacy, taking away her dignity. It was hard.” At that point (nearly a year after diagnosis), she was still cognisant of her immediate family. And the daughters would visit daily, “since the doctors had told us not to move her from her familiar surroundings.”

Then, one day, the cook told the girls to be there at mealtimes, as their mother was not eating, but the helpers had not told them or did not consider it important. “The attendants, and we tried several from different organisations, were all disappointing,” said Lubna. It was now decision time. The sisters did not want to move her between three houses, so it was decided they would move in with their mother instead, on a rotational basis, so that there was one daughter with her at all times. After discussing various options, they finally reached a consensus that they would do eight-hour shifts each. This required a major refit in their own lives, as husbands and children, and other affected people, had to be informed and adjustments made.

“Our lives were totally disrupted,” says Sadia. “Not everyone understood why we couldn’t just leave her with a nurse and helpers.” But they had seen the consequence of doing so — the paid help had neglected their mother. Also, Sadia continued, “She was changing in front of our eyes; She became confused and forgetful. Personal care and hygiene became a major issue, as she would not allow anyone to stay in the bathroom with her. The attendants had to stand behind the slightly open door. She slipped and fell one time in the bathroom, the most common accident.” Luckily, it was not too serious.

There was a marked change in behaviour. “She became aggressive,” said Lubna. “She started confiding in the new female staff, complaining about us. She also started fighting with the attendants. And hallucinating.” These were all possible stages of the disease progression, as the doctors had warned them. Except that, in their mother’s case, the deterioration was very rapid.

“I realised we had lost her when a blank, still, look came into her eyes,” says Arsh. “It was so hard to see our mother, who was always considered the most beautiful in the family, go downhill like that.” By March 2016, just 14 months after diagnosis, feeding their mother became a challenge, as she found swallowing increasingly difficult. Three months later, the doctors inserted a feeding tube in her stomach. She was hospitalised a few days later, and died 18 months after the initial definitive diagnosis of Alzheimer’s disease.

“She suffered,” says Sadia. “But so did we. Our lives were totally disrupted. We lived to a clock — eight hours sitting with our mother, then 16 hours off, then back again to the same routine.” The sisters kept up this routine for several months. “It wasn’t easy,” says Arsh, “but it was relatively short term. The longer term constant caregiving, specially if it falls on just one person, is much, much harder.” Lubna summed it up; “It’s (AD) a trauma for the patient — and the caregiver. In fact, it should be called a family disease, because the chronic stress of watching a loved one slowly decline affects everyone.”