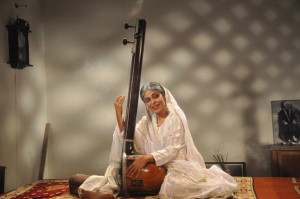 One of the main criticisms levelled against the NAPA Repertory Theatre is its magnificent obsession with staging adaptations of classics. Last month, NAPA broke with tradition by staging Indian writer Javed Siddiqui’s original play Begum Jaan. It is the story of an aging beauty who was known for her melody and her vocal prowess, but who now lives the life of a recluse in a house that is full of remnants from the past. Her only companion is her granddaughter, who she regales with colourful stories from her past life.

Ali Shaikh plays the role of a journalist, Sanjay Pandey, who has researched and read everything that has ever been published on Begum Jaan, and wants to interview her in person. He shows up at her door one day not sure if that is the right house since no one has heard or seen Begum Jaan in years, leading many to believe she may have died a long time ago. Initially Pandey doesn’t reveal his profession but tells Begum Jaan and her granddaughter that he is a college professor and is, in fact, looking for a room to rent in her house. 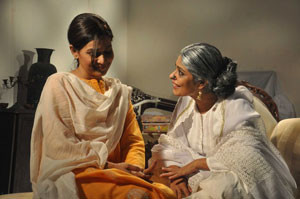 Begum Jaan sees through the farce immediately and declares that Pandey doesn’t appear to be a professor at all and that he looks and “smells” more like a journalist. Eager to learn about her yesteryears, the journalist doesn’t hesitate for a second and begins to fire a volley of questions. But more than getting just a biographical account, the young journalist is keen to learn about Begum Jaan’s relationships with some of the more well-known personalities of her time, such as Nehru and Maulana Abul Kalaam Azad. In her possession are age-old letters and correspondence between her and Azad, which may lead to an entirely different perspective on some important historical events as well as more information on Azad’s personal life. Intrigued by the stupendous collection of letters exchanged over the course of several years, Pandey tries his best to get his grubby hands on them but Begum remains adamant, insisting that those were her private memories that she certainly wouldn’t want to share with the rest of the world. What else does an ageing artist, who is no longer relevant, have other than precious memories?

Begum Jaan’s granddaughter, Zarina (Naila Jaffrey), who is also her lone relative and caregiver, is all too aware of her grandmother’s skilfully crafted stories and is never quite sure whether to believe any of it or attribute them to her delusional mind.

Though the play revolves around just three characters, the story had everyone riveted to their seats. The performance of all three actors was beyond par. Nimra Bucha, although a relatively new entrant to theatre, has already proved her mettle by her work in previous plays such as The Dictator’s Wife and Seagull. With her skilled delivery and phenomenal performance, Bucha managed to transport the audience to another era. Ali Shaikh was very convincing as the indefatigable journalist who tries all means to get a hold of the letters — going so far as to court Begum’s granddaughter. Naila Jaffrey, a well-known personality in the performing arts, gave yet another stellar performance. 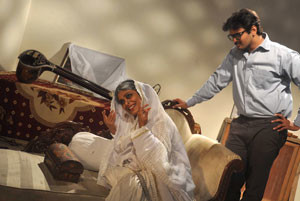 The best part of Begum Jaan was the dialogue which was so skilfully crafted and witty that it sometimes felt like one was sitting in a mushaira instead of a theatre performance. Both funny and poignant, the play which was, in effect, a commentary on society’s values, included subtle innuendos about the declining value of the arts and heritage, which made many in the audience sit up and exclaim ‘wah, wah.’ When talking about the past, Begum reminisces about a culture that is lost and what it feels like to not be relevant anymore, so much so that although she is still well and alive, people have already forgotten about her. She insists that journalists only want to write about that aspect of her life which may lead to gossip and speculation, and not about her career or the many obstacles she faced.

With sharp and clever dialogue, the satire in an otherwise tragic story was not lost on the audiences. When Begum Jaan asks her granddaughter to offer the journalist a drink, Zarina asks whether he would like tea or water, and before he can even respond Begum quips that the drink of choice for all journalists is whisky. She then asks her to bring them both two strong glasses of scotch.

As author Mohammed Hanif (Begum Jaan’s husband in real life), said in a tweet, “Everyone loves a whisky swilling, Ghalib-quoting 70-year-old beauty.” And as the verdict from the audience goes, they sure do.

This review originally appeared in the July 2011 issue of Newsline under the headline “Past Forward.”