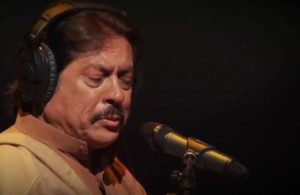 The last Coke Studio episode was satisfying enough. But YouTube previews suggested that the coming instalment would be quite strong at the very least. In its fourth episode, Coke Studio performed its usual balancing act of simple pleasures and ambitious experiments, and did a fine job.

‘Mandh Waai’ by The Sketches is fairly conservative in terms of arrangement, with clear, sedated acoustic guitar and reserved, somewhat melancholic keyboard. While each instrumental component is strong on its own (the cyclical guitar riff heard in the pre-performance YouTube video is particularly lovely), the cumulative sound is sombre and dreamy in a pretty generic way. Only the unobtrusive, jittery (and excellent) drumming draws any attention to itself. This is perhaps part of a conscious decision to push the admittedly strong vocals to the forefront. The vocal melody is beautiful, ably projecting the crystalline yearning that often defines Sufi music. I enjoyed this performance immensely, though I found it to be a little safe (the video for this performance is below).

Attaullah Khan Esakhelvi returns with ‘Pyaar Naal’ and easily equals his previous performance: the tremendous ‘Ni Oothan Waale.’ Esakhelvi’s voice is one of the most widely recognised in the country, and for good reason: the trembling, nasal rasp is arresting. It is haggard and resigned as it lulls, young and fretful as it rises. The arrangement is a wonderfully idiosyncratic one, with a shuffling beat going under an accordion and mandolin in addition to all the usual instruments. It’s an example of the kind of genius that has produced Coke Studio’s best moments. The final section, with a disarmingly pretty keyboard melody accompanying Esakhelvi’s bittersweet words, is also near perfect. The song goes out with a couple of high notes on the keyboard and muted strumming on the mandolin, and just hangs there rather than coming back in to end on a more definite note. It’s a fairly small moment in a great performance, but it might make your day (watch the video below).

‘Nar Bait’ by Akhtar Chanal Zahri is a muscular, percussion-heavy performance. The instrumentation in the first part is intensely focused, and when coupled with Akhtar Chanal’s rapid, gravely words, it holds your attention. The sultry, faintly intimidating “oohs” that conclude the first section don’t really work, and the funk-like breakdown that follows is equally jarring. This is probably less a legitimate criticism than a quirk of personal taste, but the breakdown didn’t do much for me. You may not see it coming, but once it arrives, you know precisely what you’re in for. It’s not unlike keyboards that offer (soulless) samples of various musical genres at the press of a button. That being said, the rest of the song is unique, hypnotic even, and the instrumentation is, as usual, ridiculously good.

Komal Rizvi’s ‘Lambi Judai’ will receive criticism for not being equal to or nearly as good as Reshma’s original. This kind of criticism is stupid and unconstructive because when the original song is a beloved staple, chances are the cover won’t be able to mechanically recapture everything about the original that made it what it was. The question is whether it does something interesting with the song. Komal Rizvi is an able singer and she does a good job as far as a semi-faithful cover goes. Beyond that, there are some nice backing vocals and some inspired violin work. There is nothing wrong with this performance, but after soaking in everything this version has to offer you might find yourself returning to the original.

Sajjad Ali and Sanam Marvi perform the last song of the night, ‘Rang Laaga.’ The performance starts off as pretty and subdued, and everything about this initial section is pitch-perfect. The tune takes an unexpected turn as a desolate-sounding riff enters and the song veers from forlorn to distinctly dark.  The final, up-tempo part of the song is meant to be grand, and manages to be, although it does feature some theatrically screechy backing vocals about which I am on the fence. Sajjad Ali and Sanam Marvi are both excellent, as expected. It’s a performance that people are bound to listen to and discuss.

This episode was a very strong one, with ‘Mandh Waai’ and ‘Pyaar Naal’ ranking among the best performances of the season (watch the videos below). It is a testament to Coke Studio’s worth that I often feel the urge to euphemise my criticisms for fear of giving someone reason to not watch the show. It may occasionally stumble, but there is no doubting that it is a truly remarkable thing. If people are willing to take out the time to watch, re-watch and talk about a musical show in a country like Pakistan, where most people have more pressing matters (corruption, energy crises, inflation, poverty, rampant crime and urban violence) to discuss, the attention is probably deserved.

Watch the best performances of the night below: