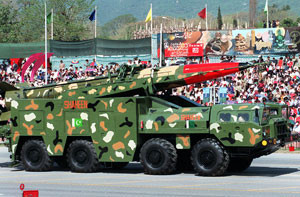 Every year there are demands from politicians, the media and members of civil society that the burgeoning defence budget be discussed in detail in parliament. The general practice has been to dismiss the defence budget in a cursory manner, without providing any details. The excuse given year after year is that it is not in the national interest to publicly discuss the defence budget.

However, in a departure from the norm, the budget for 2011-12 gives a breakdown of what used to be a one-line budget provision. The total amount allocated to Defence Affairs and Services is Rs495 billion, which is 32% of the net revenue receipts of the federal government, after providing for the provincial share. Foreign debt repayment and interest on domestic debt takes away another 67%. To meet the expenditure on other ends, budget makers are relying on over-estimated net capital receipts, external receipts, provincial surplus and bank borrowing. All these estimates are speculative, so chances are we may just run into a bigger deficit than otherwise stated in the budget.

The breakdown of the defence budget for 2011-2012 is as follows. Employee salaries: Rs206 billion; operating expenses: Rs128 billion; physical assets: Rs117 billion; and civil works: Rs42 billion. During Musharraf’s tenure, the pension for retired army personnel was shifted to the civilian budget. It was close to Rs27 billion then, but according to estimates, it must have increased significantly by now. The defence establishment can claim that the increase of their share in the new budget is only 11.48%, which is below the average 14% inflation in the last year. However, the same holds true for the civilian governments as well.

As a major chunk of the foreign arms purchases are made through loans, there is no account of the amount of loans taken or the interest paid on them.

Despite vociferous demands from the public and the opposition that the defence budget be discussed in detail in parliament, no legislator had the courage to ask for more details. Interestingly, a couple of parliamentarians who had earlier raised this issue preferred to ignore it altogether. Instead of taking the security agencies to task for their failure on May 2, most parliamentarians cleverly redirected the wrath of the House towards the US by mainly discussing the issue of Pakistan’s sovereignty and how it was violated by the Americans.

However, it is imperative that a national security policy be formulated before the political dispensation undertakes any discussion on the curtailment of the defence budget, or they will run into snags. The internal insurgency that Pakistan faces is being used to justify the present spending by the army. But even before the war on terror, we have always had a consistent enemy: India. All those who have benefitted from a war-based economy will continue to harp on the imminent threat of war with India in order to justify the spending on the 600,000-strong army.

While the perception of threat from India has always been used to justify the heavy defence expenditure, the truth is that we have fought four wars with India since 1948 to date, out of which three were initiated by Pakistan — the Kashmir war where the dangerous policy of using a tribal lashkar was introduced; the 1965 war when armed insurgents were sent into Kashmir following which India decided to choose its own battlefront; the Kargil misadventure in 1999 which backfired. It was only in 1971 when India came to the support of the Bangladeshis in their “war of liberation” and avenged the previous two attacks. It should be noted that the 1971 war was the result of Pakistan’s military operation in Bangladesh.

The Khakis argue that India is buying arms and ammunition worth billions of dollars and consequently, the Pakistan Army has to maintain some sort of balance as a preventive measure against possible aggression. The same argument is used to justify the purchase of some of the most expensive war toys such as F-16s or the $35 million P-3C Orion planes that were blown up by a handful of terrorists at the PNS Mehran base in Karachi. Ostensibly the amount spent on the country’s nuclear facility is over and above the disclosed defence budget of the country. Even retired finance secretaries are tight-lipped about where this money comes from.

While citizens are willing to foot the bill for the army to protect themselves from terrorists, they are in the dark about how much of their money goes into financing the so-called “good Taliban” or to various India-specific jihadi organisations. So unless the political government is allowed to formulate a national security policy that is not India-centric, we will not have a clear picture of exactly how much real defence expenditure is.

There is lot of fat in the defence budget that can be cut with the resources diverted to health and education. To begin with, the country does not need this big an army. When East Pakistan was a part of Pakistan, the armed forces had about 250,000 enlisted personnel. Now with half the country gone, we have more than double that number. At the same time, when we are spending billions of dollars on nuclear bombs and their delivery system, why do we need such a large conventional army? This is a question that parliamentarians should be asking.

To get a wider perspective, I asked my network of consultants in the Asia Pacific region whether the defence budget is discussed in their respective countries and whether parliament has oversight of the defence establishment and intelligence agencies. Akhil Mohan from India says that the annual accounts of the ministry of defence are presented in parliament and are available to the public. Although they are fairly detailed in accounting terms (current and capital account spending, etc.), many expenses are often disguised or clubbed under broader heads in instances where the government does not want to disclose specific details. But these numbers are almost never debated in parliament.

There is a parliamentary standing committee on defence, which deals with issues such as procurement irregularities or the need to upgrade military capability, etc. However, the committee has not been particularly effective and certainly has not helped in shaping the defence policy or action. The Indian parliament rarely discusses defence except when one political party is trying to nail another on charges of corruption and kickback allegations. Like the ISI, the operations and appropriations of the two major Indian intelligence agencies — RAW (Research and Analysis Wing) and IB (Intelligence Bureau) are not under any form of parliamentary oversight. Goes to show that we are no different from our cousins next door.

According to Michael Boyden from Taiwan, a country that lives under constant threat of annexation from mainland China, the 113-seat unicameral parliament is empowered to discuss the defence budget. Defence officials are summoned to the assembly for interpretation sessions by the chamber at large and/or committee, and are sometimes quite roughly quizzed. Civilian control of defence only came in 2000. However, intelligence budgets are not discussed.

From Thailand, Chris Bruton states, “You may think that Pakistan’s defence budget and military are the most secretive in the world. You are wrong. Within the ASEAN, we have more secretive military regimes: Myanmar, Vietnam and Laos, for example.” Additionally, “We have very limited access to details of military spending, and there are secret funds of which no details are given at all. There is no parliamentary oversight for either the military or the intelligence agencies, including the Internal Security Operations Command (ISOC) which acts almost as a parallel governmental authority” adds Bruton. 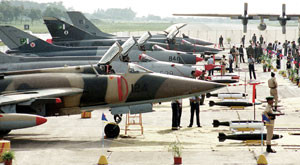 Richard Martin from Australia reports that their defence budget is presented in great detail and is available on their government website. Interestingly, with a whole continent to defend, the strength of the Australian armed forces — including the reserves — is 93,000 personnel. The Australian defence budget on the website also talks about the future expenditure, until 2012-13.

From Malaysia, my friend Paddy Schubert tells me that their defence ministry has a number of bodies including the Economic Planning Unit (EPU), a committee at the ministry level, and the parliament and the Public Accounts Committee (PAC) to monitor any discrepancies. The defence budget for Malaysia for 2011 is RM9.1 Billion (US $2.93 billion). There is a ministerial oversight committee which includes the head of the PAC. Top intelligence agencies are also monitored by elected politicians.

Coming back to Pakistan, recently a Joint Action Committee (JAC) of the civil society has called for a paradigm shift in the national security policy of the country. They also observed that the security imperatives have brought alienation from the state, particularly among the people of Balochistan. Perhaps, Nawaz Sharif is the only national leader who is boldly demanding that the military be held accountable, while Zardari is playing it safe — so safe that the Sharif government is referring to him as the army’s newest spokesman.

The parliamentary committees on defence should be fully authorised to have complete access to the details of the defence budget before giving their approval. There should also be an intelligence committee, as is the case in the US, to reign in the country’s unbridled intelligence agencies. They should be the ones approving the appropriation of funds.

This article was originally published under the headline “Cloaked in Secrecy” in the July 2011 issue of Newsline.