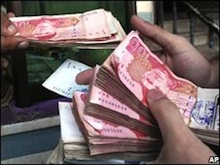 “bouge,” meaning a small bag or a wallet. It was first used in an anonymous pamphlet from 1733 titled “The Budget Opened,” which was directed against Sir Robert Walpole’s financial scheme of that year. The term has now shifted from the bag to a stack of thick documents containing financial proposals and boringly numerical pink booklets. The term is almost universally accepted in parliamentary terminology and dominates life in Pakistan’s government sector every year in the boiling month of June. The elegant Federal Board of Revenue building in Islamabad becomes the frantic epicentre of pre-budget hysteria, where frequent power cuts add to the challenges of budget-making.

The budget is not merely an arithmetic document. It is a fiscal blueprint of projected government activity put side by side with records of past years and joined with an estimate of public revenues. It is the government’s expenditure plan for the year, its fundraising targets to meet expenditures and, most importantly, a barometer of the government’s vision and policy priorities for public spending.

But it is important to move outside of the federal capital towards the cities, towns and villages of Pakistan and flip the lens from financial figurative to the state of life and well-being of the common man and woman. Impulsively, the foremost region on the list is Punjab: Pakistan’s wealthiest province, which gets the lion’s share of resources and gets to have a definitive say in public policy and strategic decision-making. The federal bureaucracy is dominated by many self-centred yet bright minds from Punjab. The influence of their lobby is obvious, and beyond all the rhetoric, the Punjab lobby is unsympathetic to the ‘smaller’ provinces whose needs are urgent and starker.

Take Khyber Pukhtunkhwa (KP) and the adjoining tribal areas of FATA, for instance. The war on terror consumes the major share of government resources, leaving barely the minimum for meeting salaries and operational costs of the current administrative set-up. This year the doubling of payroll expenditures by the KP police reflects only minutely the complexities of governing a conflict-ridden province. A week does not go by without a bomb blast causing damage to public infrastructure, killing security personnel and rattling security institutions. People have become used to living with fear. The KP government has consistently been making a policy trade-off between conflict resolution and peace-building versus long-term pro-people economic and social development. There is very little if no meaningful realisation amongst the wealthiest Punjabis that in the once serenely beautiful greens of KP, it is no more business as usual. The reality of life has changed and calls for the rest to change their approach and mindset. The KP government’s under-funded anti-narcotics strategy alongside the borders of Afghanistan and FATA in itself represents a strong call for financial and cross-party political support from powerful quarters of the country.

Nowhere on the radar is Balochistan. Neither the revised National Finance Commission award nor the Balochistan package have so far meant anything for Balochis who have been historically discriminated against by the state. Adding to their plight of abject poverty and economic oppression is the human rights vacuum in the province. Fingers point towards the intelligence agencies in the unending cases of disappearance, torture and murder of Baloch teachers, political activists, journalists and students, without any hint of accountability. Some human rights and civil society activists have been brave in openly raising questions about the military’s sinister role in Balochistan, but perhaps a moribund government, which is spiralling downwards, has little choice but to resort to violent means to silence ‘troublemakers.’ Week after week there are protests in Quetta led by relatives of the thousands gone missing, but no one in Punjab or in Islamabad seems to be listening. There are other priorities for the power-hungry, and hence this province has been left to bleed. Neither the local anti-separatists in Balochistan nor the Baloch Liberation Army are responsible for the point of no return that has been reached in Balochistan: responsibility lies with the insensitive occupants in the corridors of power in Islamabad and Punjab.

Last, and yet another ‘least,’ is Sindh: the home of the ruling Peoples Party of Pakistan. Sindh is a victim of the urban muscle-flexing going on between on-again-off-again- coalition partners, the MQM and the PPP, as well as the Awami National Party. Weekly bloodshed on the streets (the first week of July 2011 has been particularly brutal with 30 target killings on July 7 alone) and the failure of government to ensure public safety has caused Karachi to be labelled as one of the most dangerous cities of the world. Every time the PPP is in power, corruption is rife — though, of course, corruption is not unique to the PPP. The fruits of development do not reach the poor masses. Moreover, the culture of bribery stretches its dirty hands down through the lowest levels of government, tearing apart any substantive effort to promote meritocracy and transparency. Development-needs analyses are dominated by the whims of ruling coalition parties. The relatively higher budget allocations hardly make a dent in the people’s problems when one looks at the state of human development indicators in Sindh where more than one third of the population lives below the poverty line. The floods of 2010 further aggravated their needs, directly affecting nearly seven million people in seven thousands villages across Sindh.

The mismatch between economics and the human aspects of development curtails any meaningful effort towards giving people a stake in affairs of the state. The legal framework governing the relationship between citizens and state risks completely falling apart if economic justice is not built into the foundation of political processes and the nucleus of good governance. It is not to assume that the people in Punjab experience a fair and comfortable state of being. There is extreme variation among districts as development in Punjab has been focused on areas belonging to prominent figures within the PML-N. However, a change in mindset and sensitivity towards other provinces is required because an equitable approach to universal development across the geographical spread of Pakistan will benefit all, the big and the small. And that will lead to a more stable Pakistan.