With Pakistan’s new foreign minister’s arrival in New Delhi, there was much talk on blogs and chat forums, and undoubtedly around office water coolers also, about the 34-year-old’s elegant looks and overpriced handbag. Of course, instead of talking about the small miracle of Indians gushing over a Pakistani foreign minister, there should have been more talk about the small miracle that she was there at all. And it is not because of the fact that she is so young — Pakistan is not new to youth representing it on the world stage as Zulfikar Ali Bhutto was foreign minister at 35 and Benazir Bhutto was Prime Minister at 35 — it is because representatives from Pakistan were welcomed at all. In the wake of the triple blasts that rocked Mumbai on July 13, kudos go to India for keeping the dialogue on track. Citizens on both sides on the border are too used to the cross-border finger-pointing that transpires whenever trouble strikes on one country’s home soil. And despite the fiery rhetoric and hysteria emanating from many quarters in India, leaders in New Delhi need to be applauded for remaining level-headed and letting the results of their investigations into the blasts decide the fate of the bilateral talks. 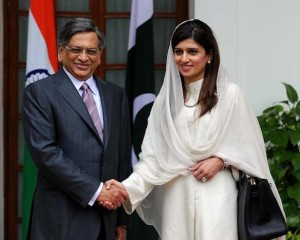 Three sessions of talks were held between the foreign secretaries of India and Pakistan on June 23 and 24. And exactly three major explosions rocked Mumbai, the financial capital of India, barely three weeks later, on July 13.

Under the resumed dialogue process, the foreign secretaries at the time (Salman Bashir of Pakistan and Nirupama Rao of India) met in Islamabad for bilateral talks on “peace” and “security,” encompassing the clichÃ©d Confidence Building Measures (CBMs) and the contentious issue of Jammu and Kashmir.

And then it was in Dadar, Opera House and Zaveri Bazaar, all crowded areas, where Improvised Explosive Devices (IEDs) splintered, taking innocent people into their obnoxious fold: the latest numbers show 24 dead and around 130 injured. This incident mirrors, to a small extent, the fifth anniversary of the dreaded July serial train blasts in the city. Three general questions loomed large after the July 13 blasts:

Before Pakistan’s new foreign minister, Hina Rabbani Khar, stepped off the plane in New Delhi, there were signs that diplomatic reconciliation would not be derailed so quickly. While Nirupama Rao asserted in Karan Thapar’s TV show Devil’s Advocate that “nothing is set in stone” as far as India-Pakistan rapprochement is concerned, the bilateral atmosphere seemed to be devoid of adventurous “atmospherics.” On one hand, Ms Rao confirms that “there has been a very glacial pace to the whole process as far as the 26/11 trials are concerned.” On the other hand, she informed the Indian media and public at large of a couple of positive details about the Pakistani government. She said this: “But let me tell you what kind of feedback we got from the Pakistanis at this round. And they spoke of the need to discuss all the serious and substantive issues between the two countries and that terrorism was at the forefront of this.”â€¨Rao did confess to Thapar that there was hardly any visible progress in Pakistan regarding the 26/11 trials. But the lack of progress, according to Rao, should not mean that dialogue is not an option with Pakistan. This is surely an ominous signal for hardcore militant groups, both indigenous and transnational alike. However, everything depends on the diplomatic will of the policymakers based in both nations and the evolving equations of the theocratic-military complex of Pakistan with its civilian counterpart.

So far, neither side has put a spanner in the works. The planned meeting between the respective foreign ministers in New Delhi occurred today with both parties emerging from their meeting talking about “confidence,” “counter-terrorism cooperation” and being on the “right track.” In this regard, it is noteworthy to quote Ms Rao again: “I think the decision to re-engage with Pakistan and to talk about the issues that divide us, that create a gulf between us, to reduce the trust deficit, as the two Prime Ministers said, I think is a very realistic approach to dealing with problems with Pakistan.”

The manner in which President Asif Ali Zardari reprimanded the blasts in Mumbai eased matters between the two nations. After all, Islamabad itself is wary of terror and hence a bilateral joint framework to tackle the scourge is the sanest approach to bring peace to South Asia. Furthermore, the Indian Ministry of Home Affairs has yet to establish any linkage between the blast and terror groups based across the Indus.

With the third question resolved, the answers to the first two are relatively straightforward. First, the July 13 Mumbai blasts are more of a desperate attempt on the part of the ultras to reassert their ‘lost’ grip over the terror network in India. After 26/11, India has witnessed about 31 months of peace, to be precise. A brief interregnum was a solo piece of violence at Pune in February of last year. Thus it will be far-fetched to assume that the July 13 incident implies a re-invigorated terror regime in India.

And such a hypothesis was echoed by India’s urbane Home Minister, Mr Chidambaram, when after the blasts he stressed on the efficiency of “his” police force as reflected in their capability of keeping India sufficiently terror-free for a considerable amount of time. With the Maoist insurgency spreading its tentacles deep in the countryside and with stones being pelted in Kashmir at the security machinery, it seems that the Indian security forces have done reasonably well to contain cross-border-bred terror. It could be the case that the involvement of global jihadi networks in Afghanistan and Iraq may well have depleted their intensity levels in India and that has incidentally raised the success levels of Indian forces.

Nevertheless, it would not be preposterous to assume further terror attacks in India, mainly in its major cities. It will be a gargantuan job for the security apparatus to make India absolutely terror-free. In fact, that might not be a realistic proposition. People’s anger at the government’s [in]action will continue, for natural reasons. Indian citizens envisage strong retaliatory measures at terror outfits, maybe even Geronimo-like operations inside the Pakistani heartland. However, that seems to be highly unlikely at the present moment. Dialogues, and not stones and IEDs, will resolve the outstanding issues and with time shall instil more confidence in the masses.

Celebrated Indian strategist Brahma Chellaney wrote this in The Daily Beast on July 14: “Undercutting India’s strength by repeatedly targeting its economic capital is a geopolitical objective that only a ‘state sponsor of terrorism’ can seek to pursue, not street gangs, underworld figures, or local fundamentalists.” His analysis may not be wholly incorrect — which obviously depends on the facts after they are unravelled — but such ‘analytical’ statements can definitely inflame matters.

Rather, it is pertinent to quote analyst (Brig.) Gurmeet Kanwal in the Deccan Herald: “It is in India’s interest to engage Pakistan and provide its government all possible support that is practically feasible to help it fight the scourge of creeping Talibanisation.”