“The US cannot dictate that the government open up new fronts in Pakistan”
– Ahmed Mukhtar, Federal Minister of Defence 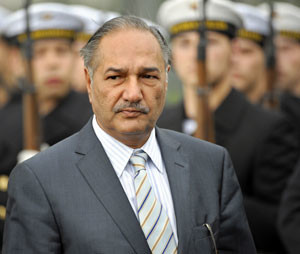 Q: The western media is hinting at a possible coup within Pakistan’s military to remove General Kayani and bring in a hard-line general with a clear anti-US approach as COAS. Is this a possibility?

A: There is no possibility of a coup within the army or otherwise. The western media is coming up with intriguing reports such as these as a part of its malicious campaign against Pakistan and the army chief, who is the central target of the campaign. Today, Pakistan is faced with a multifaceted problem and the western media is fuelling an anti-Pakistan campaign at this crucial stage to get its bosses’ agenda through, but it’s doomed to failure.

Q: After the US’s unilateral operation in Abbottabad and the militants’ deadly assault on PNS Mehran in Karachi, the armed forces’ ability to protect the country’s borders and sovereignty has been put in question. How can this affect Pakistan’s role in the war on terror?

A: Pakistan’s army is the best professional army in the world and questioning its ability and professionalism for events like the Abbottabad and Mehran base attacks is unjustified. One should not even think for a moment that Pakistan’s military is weak to the extent that it will compromise its decisive role in the war on terror.

Q: Osama bin Laden had been living in Abbottabad since 2005, but Pakistan’s security agencies claim they had no information about his hideout. Washington, meanwhile, is convinced that elements within the ISI were complicit in protecting OBL in Abbottabad. What is your take on this?

A: Human history is full of intelligence failures, 9/11 would have not occurred had US intelligence not failed. The US’s own reports on OBL have vindicated Pakistan, and clearly suggest Pakistan’s non-complicity in hiding or protecting OBL in Abbottabad.

Q: The US is hinting at cutting Pakistan’s aid (both military and civilian) for not producing the desired results in the war on terror. Given Pakistan’s financial state, how do you propose to meet this eventuality?

A: Cutting Pakistan’s aid (civilian and military) would be unwise and Pakistan believes Washington will think twice before going for any coercive move against Islamabad. But I believe Pakistan can and will sail through, even if Washington implements its plan of cutting down aid.

Q: Militants have survived Pakistan’s armed forces’ cleansing operations in the troubled areas. In fact, they seem to be growing in strength, expanding the range of their deadly attacks across the country. Does this mean Pakistan’s military is not competent enough to eliminate the militants and declare a final victory over them?

A: It’s an ongoing war and Pakistan will fight terrorists to achieve a decisive victory over them. However, the war on terror, as everybody understands it today, is also a war against an unseen enemy and it will take longer to reach its logical conclusion.

Q: A military operation in North Waziristan is a long-standing US demand. Will Pakistan give in to Washington’s demand for it?

A: The US cannot dictate that the government open up new fronts in Pakistan. Pakistan is a sovereign state and will go for a military operation to take on terrorists in North Waziristan, if necessary, and whenever appropriate.

Q: Many believe that attacks by militants on the armed forces and other strategic assets will create a situation whereby Pakistan will be forced to hand over its nuclear arsenal to the US. Do you foresee such an eventuality?

A: That will never happen and theories like these suggesting that the US will take away Pakistan’s nuclear arsenal or the possibility of these falling into the hands of insurgents will die out automatically. Pakistan is here to stay as a nuclear state and march forward with pride and honour.

Q: After the souring of relations with Washington, Pakistan seems to be moving towards China for fulfilling its defence and other strategic needs. Can Beijing serve as an alternative to Washington in the current scenario, more so now, when India is also trying to mend its fences with China?

A: China is Pakistan’s all-weather friend, and the PPP government is in favour of taking the Pak-China friendship to new heights, but that does not mean Pakistan looks to Beijing as an alternative to the US. Neither is Islamabad concerned about a warm India-China relationship.

Q: After the unilateral hunt-OBL operation by the US, India announced that it could also resort to surgical strikes in Pakistan if there were terrorist attacks in India. What would Pakistan’s response be to such adventurism?

A: How can India resort to any such misadventure as a surgical strike in Pakistan? India has been clearly warned to refrain from any act that could lead to devastating results for New Delhi.

Q: President Hamid Karzai recently stated that the US is holding an initial dialogue with the Taliban. Is the Pakistan government on board, and to what extent?

A: US-Taliban talks are no more a secret now. Pakistan is on board and fully supports the move for finding an acceptable solution for all those who are party to the Afghan war.

Q: There is a feeling that this political government should have joined hands with Nawaz Sharif to wrest control of foreign policy from the army. Instead, it is merely preserving the status quo and hoping to win the support of the army in the next elections…

A: The PPP does not want to join hands with Nawaz Sharif to undermine the army and other strategic institutions. The PML-N has crossed all limits in criticising the defence forces, and a democratic force like the PPP cannot be a party to any plan aimed at weakening vital state institutions.

This interview was originally published in the July 2011 issue of Newsline.