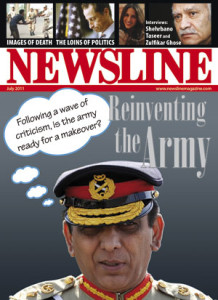 Not again? Yes, once again, the MQM has walked out of the coalition, accusing the PPP of bullying tactics in the Azad Jammu and Kashmir elections. They allege that the PPP had asked them to withdraw a Karachi candidate in their favour and, following their refusal, proceeded to postpone the election in that constituency.

With the MQM one can never be sure if the walkout is for real, since the party has a history of walking in and out of coalitions, depending on whether their demands are acceded to or not.

But now that the PPP is firmly in the saddle with the support of its newest coalition partner, the PML-Q, the party may not give in to the MQM’s ostensible “blackmailing tactics” — or will they?

Meanwhile, the now isolated PML-N has learnt some invaluable lessons from the wily Zardari, who proceeded to welcome the erstwhile “Qatil League” with open arms after all those vitriolic public spats. A vocal critic of the MQM’s “violent” ways until very recently, the PML-N is not averse to the idea of welcoming the MQM to the opposition ranks any more and may even form a coalition with them in the future.

Politics makes for strange bedfellows. In a recent development, as reported in a Karachi daily, Imran Khan has requested Pakistan Tehreek-e-Insaf’s London chapter to refrain from attacking Musharraf, and bloggers have gone into a spin mode over unsubstantiated rumours that the general has even gifted him a puppy from his canine collection.

Does it have to do with the strong rumours that some generals in the ISI are propping up the mighty Khan to score a victory in Punjab in the next elections and that the former captain (who is currently leading the Pew Popularity Polls) is warming up to them.

More than likely, or else why would a moralist like him refrain from commenting on the shenanigans of the army, now that even the awam is taking them to task.

Imran aside, the army has found an equally strong supporter in Zardari, who is now going after Nawaz Sharif hammer and tongs for his sustained and vociferous criticism of the army.

Strange are the ways of politicians — but then, as they say, politics is the art of the possible. The next elections may throw up many, many surprises.

The July 2011 issues of Newsline will be on newsstands soon. Look out for your copy.