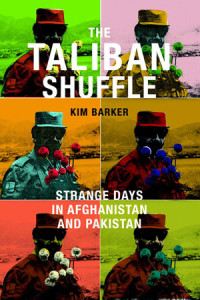 The Life and Loves of a Foreign Correspondent

Most fly-by foreign correspondents, after spending just a few months in the country they are reporting on, leave armed only with a few souvenirs and a book deal. When their books finally emerge, they rarely tell the unvarnished truth: that the journalist in question hung out only with other journalists and never left the major cities. Yet, their words would have you believe, they understand the country better than anyone else. The equivalent of this would be a tourist going to Disney World for a couple of days and using that to develop a thesis about American politics.

Kim Barker’s book The Taliban Shuffle is the antidote to that. Whether you find it refreshing or annoying depends on how jaded you are by all the books that have been written about Afghanistan and Pakistan. Barker, who reported on the two countries for the Chicago Tribune, has no overarching thesis, no sociological conclusions to draw and no insights to provide on the region. But she does have lots of gossip to narrate in a breezy, extremely humorous style.

The passages in Barker’s book that have received the most attention have been her interactions with a flirtatious Nawaz Sharif and these scenes serve as a microcosm of The Taliban Shuffle. If her accounts are anything to go by, Barker probably spent as much time with Sharif as any other foreign correspondent. Yet we learn nothing new, or really anything at all, about the former prime minister’s politics. Instead, we get the gossip. The Nawaz Sharif Kim Barker knew had self-esteem issues, a crush on Barker and the unquenched desire to present her with an iPhone.

We get a similarly insular view of just about every major event that rocked Pakistan. While the lawyers’ movement was in its primacy, Barker regaled readers with her attempts to stop getting those damned protestors from pinching her backside. A talented writer, she writes of the cat-and-mouse game she played to avoid errant fingers with great style. And so much ink has been spilled on these events that it is refreshing to finally have an account that does not pretend to be authoritative but fills well-known events with colour. Such is the case with Benazir’s assassination and funeral, where we learn more about Barker’s troubles with laptop chargers, sharing a room with smelly journalists and being ogled some more.

As a recent transplant to Islamabad, I was also glad to find out that my worst fears about the city are well-founded. Her description of the capital as “twice as dead as Arlington Cemetery with half as many people” rang true. Islamabad, for Barker, is not a den of political intrigue. Rather it is a place where she found a boyfriend, had relationship troubles and realised servants can be hard to deal with.

If Pakistan, as Barker continually reiterates, is a place she didn’t much care for, she truly loved Afghanistan. Here, too, she is frank in her portrayal of the expatriate community and, by extension, herself. The Afghanistan she describes is not a war-torn, Taliban-ravaged country. Rather, it is a whites-only enclave where the hedonism surpasses what might be found at the Playboy Mansion on an average night. Amidst the scenes of bacchanalia, Barker also finds place to lash out against the severe frisking, bordering on sexual harassment, she is subjected to at every government building and paints a poignant portrait of her up-and-down relationship with her fixer.

The Taliban Shuffle, it must be admitted, is a slight book. It contains no profound truths or insightful observations. But for anyone looking for a quick read into the very specific subject of the lives and loves of a foreign correspondent, the book will not disappoint.

This book review was originally published in the July 2011 issue of Newsline under the headline “The Life and Loves of a Foreign Correspondent.”