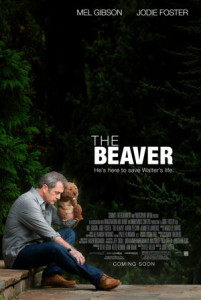 Saved by the Beaver

Imagine Mel Gibson taking the aid of a beaver hand puppet to overcome depression. No, this is not about Gibson’s personal life but rather the premise of The Beaver, a film that explores one man’s illness and how it affects everyone around him.

Gibson plays Walter Black, the chief executive officer of a children’s toy company who, because of being a “hopelessly depressed individual,” gets thrown out of the house by his wife Meredith (Jodie Foster). After several unsuccessful suicide attempts, Walter comes across a beaver hand puppet in the dumpster and decides to put it to use. Giving the puppet a British accent, Walter lets the beaver dictate his life henceforth: whether or not to take a shower, go for a jog or eat lunch.

What is initially thought to be a joke in a drunken stupor, turns out to be Walter’s agressive and driven alter ago. Although Meredith and their eldest son, Porter (Anton Yelchin), are furious, they put up with Walter’s eccentric behaviour as the younger son, Henry, is enamoured with his father’s split-personality. Even Walter’s colleagues at the toy company are bewildered at first, but once the company’s sales go up, they decide to overlook the hand puppet which never leaves Walter’s side.

The film takes great liberties in certain instances, which make some of the scenes seem silly and, at times, difficult to digest. However, the film is not only about Walter, the beaver and dealing with depression, but also about his relationship with the family. As shown in the movie, depression does not just affect one person but everyone who is close to the sufferer.

Jodie Foster, like in her previous two directorial ventures, Little Man Tate and Home for the Holidays, again explores the delicate relationships within one’s family. Especially relevant to this film, something that everyone can relate to at some point, is how Porter doesn’t want to end up like his father but is, in fact, a lot like him. Some of the more touching scenes are the ones where Walter’s ailment is explained to the younger son.

Although a flop at the US box office, The Beaver was met with appreciation at the Cannes Film Festival. While some might find the film to be incredibly outlandish, others may consider this to be an important study of one man’s depression and how it affects his life.

In the past few years, all that Gibson has been through in real life, whether it was his battle with alcoholism or allegations for being anti-Semitic, his performance in this film shows that he is a great actor who is still capable of giving an award-worthy performance. His is a heartfelt portrayal of a fallen character, which is what makes the film a memorable watch.

This movie review originally appeared in the July 2011 issue of Newsline under the headline “Saved by the Beaver.”