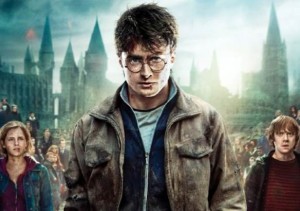 This is it. Harry Potter and The Deathly Hallows, Part 2: the much-anticipated, long-awaited final movie from the multi-billion-dollar Harry Potter franchise — over $7 billion dollars in global box office receipts…and counting.

It has much to live up to, many expectations to fulfil. And some would say that it has done just that. The movie is action packed. Based on only a few hundred pages of the book, the movie allows the filmmakers the chance to vividly breathe life into every moment depicted. All the loose strands from the previous movies are introduced, waiting to be woven together in this epic, two-hour film. Everything has been leading to this: The Battle of Hogwarts.

The visuals are spectacular, with the 3D effects enhancing certain scenes that were clearly created to exploit this hot technology. There is little doubt that the cast and crew have invested all of their efforts into making magical special effects. Curses fly left, right and centre, coloured in brilliant sparks; stone soldiers come to life; flames roar and devour entire rooms as the main protagonists, Harry (Daniel Radcliffe), Ron (Rupert Grint) and Hermione (Emma Watson), travel from the lows of deep dungeons to the highs of castle towers, and even to the world in-between life and death; and an escape is made on a dragon’s back while giants and other terrifying supernatural creatures are slain. It all makes for breathless viewing.

However, the action sequences can sometimes be overwhelming: they can prevent fans from really digging into the story. While visually one is left satisfied, plot-wise the movie can be lacking. The small fraction of the seventh book packed in to the film means that many details have been lost, something Harry Potter fans are sure to notice. Like all adaptations, the corners of the book are rounded up so that the scenes flow together, but some more explanations would have been appreciated, especially now, at the end of a saga. It feels as if the story has been neglected by director David Yates in order to focus on the action scenes.

In the tiny lapse of time when the characters aren’t blowing each others heads off, we finally learn the truth about the haunting Snape (Alan Rickman) mystery (good or evil?) in vivid, heart-wrenching scenes, while the romance between two main characters sparks very naturally, much to the pleasure of the public.

All in all, the movie is worth seeing. It follows the outline of the book, even quoting some lines word-to-word, permitting the viewer to really seize the essence of the story, while adding some unexpected humour (watch Professor McGonagall played by Maggie Smith). It also adds a more human side to this saga with the costumes and makeup. The actors are grimy, disheveled and wounded, which is unusual in an era where movie superheroes save the world without damaging a single cuticle. There are heavy casualties to this battle, and this film portrays the reality of war in a way that younger children can understand, with its dark and ugly sides, as well as its hope. And dark though it may be, it will leave you wanting more — the final instalment of the Harry Potter adventure is a family movie worth seeing.