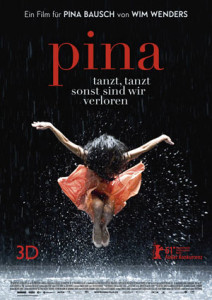 Ode to a Dancer

German filmmaker Wim Wenders once said, “I want to make personal films, not private films.” Wender’s latest work, Pina, is a prime example of that statement. While the film is a personal eulogy to his friend, the late German dancer and choreographer Pina Bausch, the use of 3-D makes it a compelling watch for audiences – and more than just a documentary on dance.

A huge influence on modern dance, Pina Bausch is celebrated the world over. Bausch revolutionised dance by combining it with theatre and music in expressionist pieces such as Le Sacre du Printemps, Vollmond and CafÃ© MÃ¼ller (immortalised by Pedro AlmodÃ³var in his film Hable con ella).

The first scene in Pina shows a large, empty set with the phrase “Alles Vorbei — 2009″ written in the background, which means “all over” with 2009 being the year Bausch died. Ironically, what follows in the next one hour and 40 minutes shows that Bausch’s legacy lives on through her work.

Pina is haunting, funny and mysterious all at once. The film recreates some of the main pieces of Bausch’s choreographed dances with the help of her dance troupe, Tanztheater Wuppertal. The film also features short interviews with members of the troupe, as well as original footage of Bausch’s early performances.

For anyone who might not be familiar with Bausch or dance in general, Pina might make little sense. This may also be because the significance of each dance performed in the film is not fully explored. One can see that themes such as loss and alienation are prevalent throughout the dances and that gender plays a very big role, but all this is open to interpretation. On the other hand, though, the viewer is immersed in the beauty and intricate details of it all, despite the lack of a narrative.

Pina is not a biographical film. It’s more about Bausch’s tremendous contribution to choreography and dance routines. Even the interviews with the dance troupe do not provide any insights into Bausch’s life and, in fact, some of them tend to get a tad repetitive after some time. However, what makes the film special and worthwhile is Wim Wender’s skilful direction.

Although Wenders and 3-D are an unlikely combination, it makes absolute sense after watching the film. Unlike some of the recent Hollywood releases where 3-D is used as a glossy attraction for audiences, here it actually serves a purpose: filming Pina in 3-D gives Wenders the opportunity to do justice to the volume and physicality of Bausch’s work.

This movie review originally appeared in the July 2011 issue of Newsline under the headline “Ode to a Dancer.”