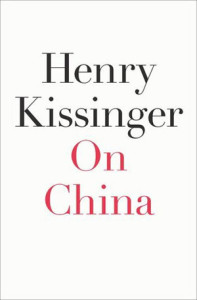 A Guide to Understanding China

Henry Kissinger’s intellectual heritage was superseded in the US by the neo-conservatives who thought unilateral action was more effective in gaining strategic advantage than alliance-building or ‘balance of power’ politics. After the defeat of the neo-conservatives, Kissinger somewhat recovered the ground he had lost by offering mostly middle-of-the-road advice in his articles which offended no one. He is now back in the market of ideas with his advice on China. And the advice is this: the US should not seek an enemy in China Ã  la Huntington but cooperation in a global condominium.

Pakistanis who look at China as ‘a friend against enemies’ are obviously wedded to the conflictual paradigm that Kissinger wants America to eschew. Reports are that India, which is tacitly asked by Pakistanis and sections of the US opinion to look at China as the enemy, is thinking more like Kissinger and China itself. The administrations in the US have avoided — so far — the conflictual paradigm together with the ruling party in China. That leaves only Pakistan out of the complex equation because Pakistanis think only in terms of jihad. Some opinion-makers in the US and the establishment in Pakistan who want to see India and China as rivals in Asia are in for a surprise if Kissinger wins his argument.

In On China, Kissinger says: “Eight American presidents and four generations of Chinese leaders have managed this delicate [non-conflictual] relationship in an astonishingly consistent manner, considering the difference in starting points.” Yet their exceptionalisms go in different directions: “American exceptionalism is missionary. It holds that the United States has an obligation to spread its values to every part of the world. Chinese exceptionalism is cultural. China does not proselytise; it does not claim that its contemporary institutions are relevant outside China.”

In 1962, when Mao decided to engage India in a border battle, he summoned his top military and political commanders to tell them that China and India were not doomed to perpetual enmity. The think tanks in India know this; but in Pakistan, think tanks suffer from a uniformity of thinking that pleases the establishment. As stated early in the book, the presiding philosopher in China is Confucius who, unlike Machiavelli, was concerned more with the cultivation of social harmony than with the machinations of power. For him, mankind’s central spiritual task was to re-create proper order already on the verge of being lost. Spiritual fulfilment was a task not so much of revelation as patient recovery of forgotten principles of self-restraint.

The other thinker who has dominated China’s realpolitik is Sun Tzu. His book Art of War says: “Not every problem has a solution and that too great an emphasis on total mastery over specific events could upset the harmony of the universe. There were too many potential enemies for the empire ever to live in total security. If China’s fate was relative security, it also implied relative insecurity — the need to learn the grammar of over a dozen neighbouring states with significantly different histories and aspirations.” On the other hand, the western tradition prized the decisive clash of forces emphasising feats of heroism. The Chinese ideal stressed subtlety, indirection, and the patient accumulation of relative advantage. Writes Kissinger: “Chinese thinkers developed strategic thought that placed a premium on victory through psychological advantage and preached the avoidance of direct conflict.”

Kissinger gives us another contrast: “Chinese diplomacy has learned from millennia of experience that, in international issues, each apparent solution is generally an admission ticket to a new set of related problems. Hence Chinese diplomats consider continuity of relationships an important task and perhaps more important than formal documents. By comparison, American diplomacy tends to segment issues into self-contained units to be dealt with on their own merits.”

Today, two very realistic Chinese leaders are in power: President Hu Jintao and Premier Wen Jiabao. In a way they have a more difficult task than their predecessors. China is the dominant economic power and its population is increasingly inclined to embrace the conflictual paradigm in response to western projections. There is the Chinese triumphalism to hold in check if Confucius and Sun Tzu are to stay in their pantheon. Hu and Wu have responded to this new mood by installing a statue of Confucius at the centre of the Chinese capital, Tiananmen Square earlier this year, in January 2011.

Kissinger inclines to the Chinese position on Sino-US quarrel over the exchange rate. He wants America to adopt some of the precepts that Hu and Wen want to stand by. He however becomes a little flustered by the National Destiny Debate in China through such books as China is Unhappy: The Great Era, The Grand Goal, and Our Internal Anxieties and External Challenges and hopes the present leadership can overcome the new mood which wants to see China becoming number one “only by displacing the US.”

Kissinger, always the realist, cannot close an overwhelmingly positive assessment without a look at the entrenched intellectual warts, and his final advocacy comes in the epilogue which considers what he calls The Crowe Memorandum of 1907, when a senior official in the British Foreign Office, Eyre Crowe, wrote a brilliant analysis of the [fate of] European political structure [after] Germany’s rise. This means that by sheer reason of becoming dominant through economic success, China will be the cause of the collapse of the current equilibrium presided over by the US. He pleads: “Relations between China and the United States need not — and should not — become a zero-sum game. For the pre-World War One European leader, the challenge was that a gain for one side spelled a loss for the other, and compromise ran counter to an aroused public opinion. This is not the situation in the Sino-American relationship. Key issues on the international front are global in nature. Consensus may prove difficult, but confrontation on these issues is self-defeating.”

Conflict weighs heavy in the intellectual baggage of the West but there is also the ballast of economic cooperation through globalisation in which states are helplessly bound by their connected economies to think of solutions other than war. But it is in Asia in general, and South Asia in particular, that pure warriors still wear the menacing paint on their faces as part of their nationalism. The chief of Pakistan Army is proud of the fact that he adheres to the 1907 Crowe Memorandum, trusting war-preparedness of the enemy more than his peace-avowals — which is a formula for an arms race — while the population he is charged to protect is dying of hunger and from terrorism.

Victory seldom teaches anything, but defeats are always instructive. The West and China — if that is the opposed binary — have learned from defeat and are sensitive to the fragility of the global economic order which has brought them prosperity. The only mind that remains unaffected is the Muslim mind. There is no concept of defeat for the warrior of jihad; therefore, there is no concept of putting a stop to waging war when doing so would be of worldly advantage. That the warrior fights for that which is not of this world would confound Confucius and Machiavelli both. Since there is no defeat, there are no lessons to be learned. The doctrine that holds sway is that of perpetual jihad. Can China fit into this worldview? Pakistan is trying but may be doomed to find that even as China’s ‘permanent friend’ it understands China much less than those who are considered its ‘permanent enemies.’

This book review was originally published under the headline “A Guide to Understanding China” in the July 2011 issue of Newsline.