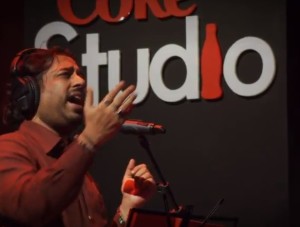 The final episode of Coke Studio’s fourth season was comprised primarily of profiles of this season’s artists. While a victory lap is surely deserved, it is the fortunate inclusion of two performances by the breakout stars of Coke Studio 2011 that makes the episode more than just a fond retrospective.

Asif Hussain Samraat has a voice that is almost cloyingly beautiful: bittersweet and gossamer-like, its dulcitude nearly distracts one from the technical skill involved. Armed with such a lovely instrument, Mr Samraat could hurl vile epithets and unconscionable insults at his listeners and still inspire wide-eyed wonder. In “Beero Binjaaro” he sings about rustic comforts and family in a song that is simpler and less restless than his last effort, although the same sense of vague sadness lingers here too. The performance is a wonderful one (watch the video below), and I hope Coke Studio will have the good sense to have Mr Samraat return next season.

“Kangna” by Fareed Ayaz and Abu Mohammed was perhaps this season’s greatest triumph, a mean, swaggering beast of a song and, therefore, I confess to some degree of girlish excitement upon learning that the Qawwals would return to close the season. My initial reaction was that “Mori Bangri” was simply too reminiscent of “Kangna” to justify my giddiness at its prospect. The song is admittedly miles apart from “Kangna” in terms of its atmosphere, but the similarity is still striking. “Kangna” employed a dynamic of unsettling tension followed by vicious release, whereas “Mori Bangri” is much more even and less arresting. It is different, but not different enough, and different in a way that is not as successful. However, the skill on display is undeniable as ever, and without having experienced “Kangna,” I would probably have been unburdened by high expectations and been more effusive in my praise. It is interesting to see a Qawwali built from Coke Studio’s intro music, but the whole thing seems less playful and stiffer than “Kangna.” Even so, I would gladly spend 15 minutes of my day listening to Fareed Ayaz and Abu Mohammed singing about jewellery, and enjoyed “Mori Bangri” quite a bit.

I suggest that Coke Studio fans watch the feature on the house band as they build the “Kangna” performance from the ground up. The process is even more complex than what I imagined during my review of the second episode and is fascinating to watch. The Coke Studio house band is a scarily talented bunch of musicians, and anyone who enjoys the show should regard them with a reasonable degree of awe. Mention must also be made of all those involved in the visual aspects of Coke Studio’s production, since one thing you can depend on is wonderfully filmed performances, regardless of their content.

It’s been a rewarding season, littered with brilliant performances, as well as notable failures, but featuring very little that did not inspire strong feelings of some kind. That is, ultimately, the sign of any successful show. At this point, music fans’ feelings are expressed succinctly in the following comment on Coke Studio’s Facebook page: “nice songs, when episode 5 will come??????????”

To read the previous reviews of Coke Studio’s fourth season by Danish Hyder follow the links below: