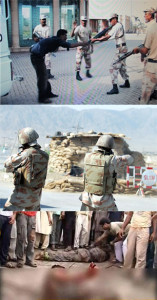 There are some images of death that remain forever etched in the mind. These include award-winning photographs, such as the one showing a South Vietnamese soldier shooting, at point blank range, a suspected North Vietnamese collaborator. Or the one, also from the time of the Vietnam war, of a little girl running, her body aflame from a napalm bomb.

The image of the point-blank killing of young Sarfaraz Shah by Rangers personnel at the Shaheed Benazir Bhutto Park on June 8 will surely enter the album of unforgettable atrocities. It has already become part of our collective memory and consciousness. The sequence of events, as filmed by the cameraman, evokes a range of emotions — from horror to helplessness.

While there have been many disturbing images broadcast on private television channels before, this particular footage has been the subject of considerable debate and concern. Firstly, the way the Rangers personnel intimidated Shah prior to and even after the shooting, ignoring his pleas, degrades humanity to its lowest form. The kind of effect this footage has had across the board — including staunch upholders of ‘law and order’ — is, perhaps, unprecedented in Pakistan. Simultaneously, concerns have been raised about the repeated telecast of these images and its impact on the victim’s family, as well as on children.

It must be conceded that without the broadcast of the video footage of Shah’s killing, the incident would simply have been reported as an ‘encounter’ or yet another extrajudicial killing. Its true horror would have been neatly covered. The chain of events, leading to the suo motu notice by the Supreme Court and the removal of the top two law enforcers of Sindh, would not have taken place had it not been for images too disturbing to be ignored.

A similar case is that of the four Russians and one Tajik from Uzbekistan (originally identified as Chechens) killed by security forces in Kharotabad, on the outskirts of Quetta in May. Again, if it were not for an enterprising and conscientious cameraman, the killings would have successfully been passed off as ‘encounters’ with terrorists. Indeed, that was the attempt made initially. The Kharotabad case is currently under a judicial investigation. Regardless of its findings, images of an unarmed pregnant woman being gunned down and a necklace being pocketed by a policeman are unlikely to go away.

The Shah case has brought into focus the role of the media, as well as the repercussions. The media has been chastised by some for over-exposure of these two brutal killings. Earlier, too, the repeated telecast of the public lynching of two brothers, Muneeb and Mughees, in Sialkot drew a similar response. The electronic media has yet to realise that once the shock effect is over, images of brutality shown over and over again can either desensitise people or create a level of fear that would leave them incapable of challenging authority. The repercussions for the brave cameramen are more immediate. Abdus Salam and Zahid Khokhar of Awaaz television and Jamal Tarakai who filmed the Kharotabad killings reportedly started getting threats, leading the Supreme Court to instruct the government to provide protection to them.

Society and the media also has to contend with public memory, which is notoriously short. The image of the lynching of two young men in Sialkot on mere suspicion and in the presence of the police is fast fading from our consciousness. As is the image of inhuman torture of a man in a private police cell in Chichawatni, caught on somebody’s mobile phone camera and telecast to the country at large. This blood-curdling footage, too, prompted the Supreme Court to demand that the Punjab Police give an affidavit affirming its decision to close all private torture cells.

These images, captured by professionals or ‘citizen journalists’ on their digital cameras or cell phones, have encouraged the exposure of injustice and cruelty. The onus of acting on such clear evidence lies with the government and the judiciary. However, the only time that cold-blooded killing was telecast in real time, as it happened, was on May 12, 2007, in Karachi, the day the then deposed Chief Justice of the Supreme Court arrived in Karachi and was prevented from leaving the airport. The blood stains of May 12 seem to have been washed away from the streets of Karachi as well as from our memories.