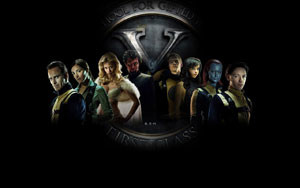 X-Men: First Class. But thankfully, the doubts were unfounded: a guest appearance by Jackman in which he uttered all of two words and Michael Fassbender cast as Eric aka Magneto more than made up for any shortcomings.

First Class goes back to the very beginning, when Professor X (or Xavier) was Charles, Magneto was Eric and Mystique was Raven, before any of them had assumed their mutant identities, before they had chosen sides and were, in fact, on the path of discovery of their mutant selves. It traces their childhood experiences, which add context to their mutant ways: Charles’s (James McAvoy) rich yet absent-parent background, Mystique’s (Jennifer Lawrence) vagabond ways ultimately finding a home for herself in Charles’s house as his foster sister, and Eric’s Holocaust background, where his mother was shot before him while they were detained at a Nazi concentration camp. But there is a lighter side to their lives: it is interesting to see a flirtatious Xavier, the bratty Mystique and a very suave Magneto.

The first half of the movie introduces the characters, their backgrounds and how they meet — which is mainly after they are inducted into a covert CIA operation, propelled by an interest in Charles’s thesis on genetic mutation. After roping Eric into the programme, Charles embarks on a journey with him to find and bring back mutants to the research facility, and it is at the facility that we meet Hank/Beast (Nicholas Hault), at that time in human form though still inside a laboratory and with a lab coat on — his usual abode and customary dress. While on a personal level there are fissures, there is much more happening on the global stage. Running parallel to their personal stories is a historical timeline: First Class is set against the political backdrop of the Cuban Missile Crisis – with a mutant twist to that period in history.

Enter Shaw (Kevin Bacon), scientist-turned-politico who was at the helm of affairs in Nazi Germany and is at the helm of affairs years later, though in a more understated manner, responsible for bringing the US and the Soviet Union to the brink of a nuclear war. While Shaw is a common enemy to both Charles and Eric, who are trying to prevent war and the loss of innocent lives, Charles has a clearly defined line he must not cross. For Eric, however, right and wrong is not as simple as that. Shaw is his mother’s murderer and his only interest is in avenging her death. There comes a breaking point for Eric and many other young mutants, when despite them risking their lives to prevent war, the guns are later pointed at them — they are viewed as a potential threat due to the powers they possess. Eric chooses a path of confrontation and destruction as a result, which creates a division between the mutants and leads to a falling out between him and Charles. This ultimately leads to the emergence of the two sides that we see in the earlier movies.

First Class provides insights into the relationships of some of the characters that appear in earlier films and contexualises why they choose their respective paths. It also touches upon the ‘otherisation’ phenomenon, corruption within the ranks of generals and political classes, their desire for a show of strength regardless of the consequences and, of course, the fact that the CIA cannot be trusted.