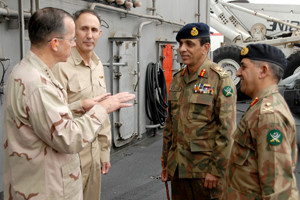 Last month, to no one’s surprise, the US Senate unanimously confirmed David Petraeus as the next CIA director. Admired as much for his political savvy as his battlefield successes, the outgoing commander of international forces in Afghanistan is often depicted as a sure-fire presidential candidate. Here in Washington, the general can seemingly do no wrong.

Within the Pakistani military establishment, however, he is more reviled than revered. According to the New York Times, security officials do not regard Petraeus as a friend; Ashfaq Parvez Kayani has referred to him contemptuously as a “political general.” And they have surely not forgotten his David Kilcullen-esque prediction — made back in 2009, as advancing Taliban forces edged closer to Islamabad — that the government could fall in two weeks.

One might therefore assume that with Petraeus at the helm of the CIA, repairing the agency’s troubled relationship with its Pakistani counterpart will not get any easier.

Maybe. Though not necessarily. When it comes to assessing CIA-ISI ties, there are no safe assumptions.

Given the secrecy that shrouds the intelligence relationship, few know exactly what is going on. And even when we think we do, we often discover we don’t. Last month, Pakistan’s interior minister announced that the CIA was “not operating” in Pakistan — only to be contradicted a few weeks later by US officials who contended that Americans (read: CIA personnel) remain stationed at Shamsi airbase.

What we do know, in the aftermath of the Raymond Davis and Osama Bin Laden imbroglios, is that the relationship is beset by tension. Pakistan has demanded the names of American spies in Pakistan, ordered US military forces out of the country, arrested CIA informants, and shuttered intelligence-sharing centres. America has countered by publicly voicing long-harboured suspicions (previously expressed in classified government documents and revealed earlier this year by WikiLeaks) that the ISI colludes with militants. “It’s fairly well-known,” stated Chairman of the Joint Chiefs of Staff Mike Mullen this spring, “that the ISI has a long-standing relationship with the Haqqani network.”

Then there is the vitriolic public opinion. Americans allege ISI complicity in all manners of nasty business, from the sheltering of Bin Laden to the murder of journalist Saleem Shahzad. Meanwhile, in Pakistan, the views of Shireen Mazari — who recently screamed, “Who do you think you are, you bloody CIA agent?” at a man who inadvertently bumped his chair into hers in an Islamabad restaurant (a man who appeared Western, but was not necessarily American, much less a CIA agent) — are by no means representative of the broader population. Yet the perception of a shadowy, all-encompassing CIA presence dominates popular culture. Recall those black-suited, dark alley-lurking, sinister-looking men featured in the music video for Shehzad Roy’s hit song “Laga Reh.”

To be sure, such perceptions are rooted in fact: The ISI is no angel, while the CIA has enjoyed a considerable presence in Pakistan. Still, rational thinking is one of demonisation’s first casualties. Americans (inside and outside the Beltway) have railed against the ISI’s arrests of Pakistani CIA informants in the Bin Laden raid. They forget, however, that their own government punishes those who aid foreign states, including close allies. (Jonathan Pollard, a former US naval intelligence analyst, has languished in prison since 1987 for allegedly sharing secrets with Israel.) Meanwhile, Pakistanis decry the use of CIA-managed drones, despite their having taken out the likes of Baitullah Mehsud and Ilyas Kashmiri — militants who threaten the Pakistani state and its people.

Undergirding public opinion in both nations is a common refrain: America needs Pakistan more than Pakistan needs America. Perhaps this is why the ISI has threatened to sever its ties with the CIA, while the CIA has never done so. Or why US public pronouncements about the ISI are much more conciliatory than Pakistan’s about the CIA. While the Davis crisis raged, the CIA issued this soothing statement: “The agency’s ties to the ISI have been strong over the years, and when there are issues to sort out, we work through them. That’s the sign of a healthy partnership.” Such language is rarely used when Pakistani intelligence officials speak publicly about the CIA.

Yet this language, as with public perceptions, reflects present ground realities. Both sides are indeed making concessions and patching up problems. According to US media reports of recent days, Pakistan has now removed its freeze on visas for American intelligence officers, and is allowing CIA staff to re-enter the country. Meanwhile, the United States (at least for now) no longer launches lethal drones from Pakistani territory.

Despite this progress, the CIA-ISI relationship will remain rocky. Given the level of mutual mistrust, it cannot be any other way. And in the post-Abbottabad affair era, the one corrective capable of restoring trust and goodwill — intelligence-sharing leading to the apprehension of high-level Al-Qaeda terrorists in Pakistan — no longer seems achievable.

The best-case scenario is that the spy agencies’ relations, much like the broader bilateral relationship, will precariously plod along, delicately defusing any new tensions that flare up. As Washington begins its phased military withdrawal from Afghanistan, expect the next tussle to revolve around the role of the Haqqani network — toward which the CIA and ISI favour drastically different policies — in political reconciliation efforts.

Alas, this “muddle-through” state is far from assured. Imagine another unilateral US military raid on Pakistani soil, conducted without consulting the ISI. Or a terrorist attack on US soil, traced back to Pakistan-based extremists. Neither scenario is far-fetched. The first one could cripple CIA-ISI ties, while the second could topple the spy relationship altogether.

Or maybe not. Making predictions about the future trajectory of this opaque relationship is an even more inexact science than venturing assumptions about its current state.