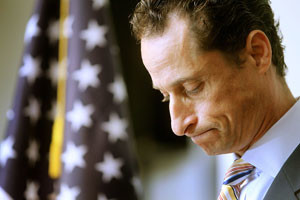 In a 1970s film called Sleeper, when a character played by Woody Allen is informed by men in white coats that the part of his anatomy contained inside his skull faces a high-tech experimental procedure, he exclaims in a mixture of panic and indignation: “My brain! It’s my second favourite organ!”

It is commonly said of men in prominent positions who stumble on account of sex-related offences or indiscretions that they must have been thinking with their loins. The prospect was inevitably raised in connection with the saga of former US Congressman Anthony Weiner, who resigned last month after it turned out he had used social media to send a revealing photograph of a particular part of his anatomy to a teenage female college student.

It emerged shortly afterwards that it wasn’t the first instance of such an action: he had form in such matters.

After being caught with his pants down when a private Twitter message inadvertently turned up in his public feed, Weiner initially claimed that his account had probably been hacked — and hey, he wasn’t sure anyway whether the crotch in question was his.

Soon afterwards he admitted responsibility, and then announced he would seek leave from Congress in order to obtain treatment that would make him a better family man. He made no effort to resign, even as pressure to do so mounted within the Democratic Party that Weiner represented.

He eventually quit only after being nudged down that path by both President Barack Obama and former president Bill Clinton — who had officiated only last year at Weiner’s wedding to Hillary Clinton’s confidante and deputy chief of staff Huma Abedin (who, incidentally, was born in Saudi Arabia to an Indian father and a Pakistani mother). Bill was reportedly livid at Weiner’s behaviour. One can imagine him raging: “Who the hell does that schmuck think he is! Me?” 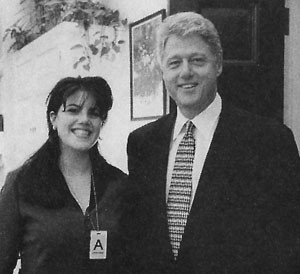 That the media got wind of Abedin’s pregnancy was another blow to her husband’s reputation. Weiner — who combined a pugnacious liberalism in domestic affairs with a Likudite stance on anything to do with Israel — was considered a promising candidate for the coveted post of New York’s mayor in 2013. His political dreams have been buried for the time being — and as someone who has spent his entire adult life as a political hack, there isn’t a career to which he could return.

There are those who have been wondering whether this might be too high a price for Weiner to pay on account of actions that were undoubtedly idiotic and therefore embarrassing, but which caused little harm (other than, eventually, to Weiner and Abedin). Although the reactions of the women at the receiving end of his missives are not known, none of them filed a formal complaint. And the Congressman’s bizarre hobby may well have remained private but for (excuse the pun) a cock-up.

Once it became public, though, it’s not hard to see why the party bosses wanted him out of the way.

What’s arguably more interesting is the customary pattern of male behaviour in such circumstances: adamant denial, followed by admission and a spot of contrition, leavened with the hope that the matter can thus be put to rest.

Given her predicament, Abedin could hardly have hoped for a better counsellor than Hillary Clinton, given her experiences with Bill. The latter arrived at the White House in 1993 with a history of promiscuity. His peccadilloes during his years as the governor of Arkansas had dogged him during the presidential campaign, and his wife must have had a pretty good idea of his proclivities. So it must have been her husband’s audacity in arranging to be fellated in the Oval Office that must have shocked her.

Having declared some time earlier that she wasn’t the sort of person who would follow Tammy Wynette’s advice and stand by her man in the event of infidelity, she then proceeded to do exactly that in public, decrying the “right-wing conspiracy” that led to Bill Clinton’s impeachment. Hillary wasn’t entirely wrong about the conspiracy bit, but she must have realised that Bill had made it so much easier for their foes.

The latter may have, consciously or otherwise, been following in the footsteps of his hero, John F. Kennedy, who had informed his aides that he couldn’t do without a daily dose of “a piece of ass.” And he usually got it: his bed mates famously included Marilyn Monroe and mobster Sam Giancana’s girlfriend. JFK’s insatiable sex drive was hardly a secret among newshounds in Washington, but it received no publicity during his lifetime — in those days it was considered impolitic to delve into such matters. The FBI’s fascistic boss J. Edgar Hoover reputedly maintained a meticulous file, and may have been inclined to use it had his own position been threatened. (Hoover, a private cross-dresser, had secrets of his own that would, if publicised, have ended his career). 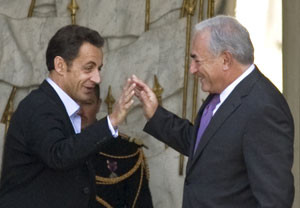 Around the same time, Britain was rocked by a scandal involving war secretary John Profumo’s brief affair with call-girl Christine Keeler, who was said to also be on intimate terms with a senior Soviet diplomat. Profumo was caught lying to parliament, but would have lost his job even if he had admitted the truth.

By the Clinton era, the media discretion that prevented a scandal in the days of Kennedy was but a dim memory: Watergate, among other developments, had changed everything. So the semen stain on Lewinsky’s blue Gap dress was discussed in considerable detail. It is equally a sign of the times, though, that Bill Clinton’s reputation did not suffer terminal damage.

There is little equivalence, however, between the foregoing cases and the saga of International Monetary Fund chief Dominique Strauss-Kahn, who was arrested in New York in May on the charge of attempted rape. However sordid or deplorable it may be, a consensual relationship between adults falls in a different category.

The accusation against Strauss-Kahn was made by a maid at the Times Square hotel where he was staying. She managed to wriggle out of his grasp and raised the alarm; he evidently panicked and headed for the airport. After all, he had a meeting with German Chancellor Angela Merkel the following day. He was accosted by the police 10 minutes before his Air France flight was due to take off. Strauss-Kahn raised the question of diplomatic immunity, but that apparently was restricted to his actions in his official capacity.

The case was before the courts at the time of writing, but Strauss-Kahn’s prospects of challenging Nicolas Sarkozy in the next French presidential election were dead. As in Weiner’s case, it took him a few days to relinquish his post — at what is a crucial juncture for the IMF, with the euro zone in danger of imploding. Allegations that subsequently emerged tended to reinforce Strauss-Kahn’s image as something of a sexual predator.

The Independent’s Johann Hari, however, made a fair point early last month when he argued that the IMF itself ought to be on trial. “If Strauss-Kahn is guilty,” he concluded, “I suspect I know how it happened. He must have mistaken the maid for a poor country in financial trouble. Heads of the IMF have, after all, been allowed to rape them with impunity for years.”

History is, not surprisingly, laden with instances of men in prominent positions putting their public and private lives at risk in pursuit of sexual gratification. Among contemporary cases, perhaps the most bizarre is that of Italy’s Prime Minister Silvio Berlusconi, who has thus far politically survived the perfectly believable allegation of paying for sex with underage girls.

Outside politics, there is, inter alia, the sordid case of Tiger Woods.

What makes them do it? That’s a question for psychiatrists, who speak of a disorder called sexual compulsivity. The Washington Post paraphrases Kenneth Paul Rosenberg, an addiction psychiatrist at a medical college in New York, as saying that this “entails repetitive, sexually oriented behaviour involving risk, whether to one’s career, marriage or reputation.”

An aphorism attributed to Henry Kissinger, himself something of a ladies man, puts it more simply: Power is the ultimate aphrodisiac.