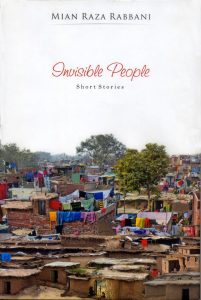 A significant majority of our political figures unarguably fall into the former category. Even after almost 70 years of independence, we can boast of only a handful of politicians who truly epitomise statesmanship. But Senator and incumbent chairperson of the Senate, Mian Raza Rabbani more than most, would perhaps fit the bill. His entire life — beginning from his university days — has been a testament to his concern for, and active involvement in work involving the rights of the downtrodden, the marginalised and the man — or woman — on the street. And his latest book, Invisible People, demonstrates how, career commitments nothwithstanding, they are never far from his thoughts.

In Invisible People, Rabbani has penned a series of 11 short stories with a central theme of how society at large deals with the elite, versus the neglected, be it in hospitals, in the courts, even inside jails, and within smaller communities and with those on the streets. With hard-hitting intensity, Rabbani writes as if seeing through the eyes of those who have fallen through the cracks — and dilates upon the unwritten but endemic set of rules that is oriented towards the privileged classes.

A woman driven by despair looking for her innocent son in the courts; a labourer in a hospital ward listening to the woeful tales of others like him; tales of prostitutes — one who tried to make a life outside of the mandi (flesh bazaar), and another, who reflects on lost innocence; the ordeals of the surviving son of a malnourished mother who dies in childbirth; the servant boy who circumstances compel to give up studies… these are some of the stories through which Rabba 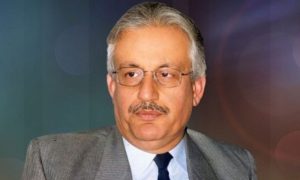 ni highlights the sad lives of the disadvantaged who remain fortune’s victims throughout their lives.

In the introductory pages of Invisible People are quotes from the poet, Kahlil Gibran’s The Garden of The Prophet: “…Pity the nation whose statesman is a fox, whose philosopher is a juggler, and whose art is the art of patching and mimicking…” which perhaps strongly resonate with Rabbani as his stories are dotted with vivid imagery as well, such as “… a local trader who, through cunning and deception, had acquired as many properties as a dog has fleas,” and, “She recoils like a flower closing its petals as night approaches.”

In several instances there are glimpses from Rabbani’s own life, for example, when he writes, “buried under an avalanche of memories, as though my childhood toy chest had been overturned,” in `When a Part of You Dies.’ But my favourite and perhaps the most poignant story of all is ‘A Dead Man Walks’ about a private security guard who is imprisoned by his boss for a crime he never committed in place of the real culprit — the boss’s son.

Not just a distinguished public servant, politician, seasoned lawmaker and activist with many awards, Rabbani is also a man of letters having written, apart from his latest offering, A Biography of Pakistani Federalism and LFO: A Fraud on the Constitution. His third book, Invisible People, a creative endeavour unlike the other two, is written with compassion and humanity, making for a heart-wrenching dose of reality in print.