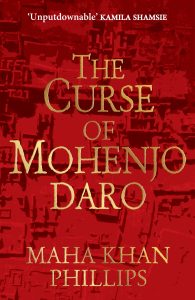 Maha Khan Phillips’ first novel called Beautiful from this Angle was a social satire. With its publication in 2010, Phillips had morphed from a financial journalist into a creative writer. Shortly after the publication of this debut novel, she was interviewed by Newsline, and when asked what she would like to write next, she replied: “I hope to write a thriller.”

She has fulfilled this promise to herself with the publication of her second novel, The Curse of Mohenjodaro. With hints of James Bond, Lara Croft, Indiana Jones and yes, it must be said, the Dan Brown novels, it is hardly surprising that there isn’t a dull moment in this frantically-paced historical thriller.

The epicentre of action in the story is located in Mohenjodaro. The opening chapters quickly establish two parallel narratives that unfold, with a gap of thousands of years between the present time and 3800BC onwards. The narratives are separated by the helpful devices of chapter breaks and change in the font particular to each time period. The ancient town of Mohenjodaro, as it is known to us in the present age, is referred to as ‘Meluhha’ in the chapters concerning the past. (In fact, the name Meluhha was discovered by archaeologists in Sumerian cuneiform texts, and is widely assumed to refer to the Indus Valley region). The author is a meticulous storyteller and she maintains clarity in her dual storylines. The many loose ends of a complex plot are brought together in a grand finale. The two narratives are united harmoniously by the profound revelations that connect past and present lives, especially those of the female protagonists.

The story opens on an international team of archaeologists working at the present day archaeological site of Mohenjodaro. Floods in Sindh have brought ancient seals to the surface and they intriguingly suggest a much older timeline to the ancient civilisation than it was previously understood to be. The team includes Layla, who wishes to lead “an anonymous life, a simple life, one that would interest nobody but herself.” She feels a deep, ineffable connection to the land, not least because of her Pakistani father.

Events transpire to throw Layla into the centre of a dreadful maelstrom. An inexplicable explosion is recorded on a video stream of the dig, which leaves the team and several villagers dead. The video shows Layla walking away from the disaster zone towards her disappearance which galvanises her half-sister, Nadia Osbourne, to come to Pakistan from the United States in the hope of finding her sibling. Her search for Layla sets off a dangerous journey across several countries.

In contrast to the unassuming Layla, Nadia is a turbulent personality. She is a successful writer of horror novels but is badly scarred by their father’s treatment of her as a child. Sohail Hussain (the father) is the leader of a cult called Giving of Light Foundation. His mistreatment of Nadia left her battling nightmares and substance abuse long after she was removed from his influence by her American mother.

Nadia has recurring dreams about a young woman called Jaya, who is the central character of the narrative that takes place in Meluhha. The dreams, as the story develops, relate to preternatural phenomena rather than to mental psychosis.

The ruins of Mohenjodaro are ably brought to life in the author’s recreation of Meluhha. She incorporates what we now see as archaeological artefacts and interpretive data into descriptions of the vibrant city — the robes of the priests, the ox cart driver with his wares of beads, the throng of the marketplace — and creates a credible portrait of the living, breathing culture in which Jaya features so significantly. Maha Khan Phillips has peppered the story with research on ancient life in the Indus Valley. She is conversant with archaeological terminology such as the Rebus script, thermo-luminescence, etc. and has brought her research to bear on the imaginary recreation of an ancient world.

With recent interest in ancient heritage ignited by novels such as Amish Tripati’s Shiva Trilogy and Asutosh Gawariker’s blockbuster film Mohenjodaro, it is all the more exciting to have a home-grown author contribute towards popular fiction with such competence. The thriller will go a long way in making an otherwise erudite subject accessible to a wider audience. Moviemakers should lose no time in grabbing the rights for this novel.