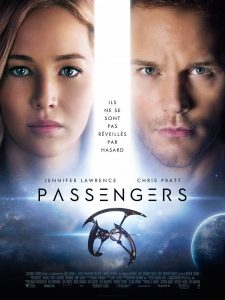 To be in almost every scene in a motion picture requires considerable screen presence or star power, especially if there are 40-foot close-ups. Fortunately, the very buff Chris Pratt and the fabulous Jennifer Lawrence have it in abundance and make the perfect pair for a movie of genesis in space. Of course as movie reviews go, Passengers did not get a rating above average, although screenwriter Jon Spaihts of Doctor Strange and Prometheus fame, along with Director Morten Tyldum, have produced a perfectly crafted sci-fi film with a very different take on a space journey.

Unexpectedly woken up from his hibernation pod on the super spaceship Avalon, that has just manoeuvred through a deadly meteor shower, Jim Preston (Chris Pratt) finds that a malfunction had caused him to be the only one awake among 4,999 fellow space travellers. Preston’s spaceship is on a 120-year space journey from Earth to colonise a new planet, called Homestead II. But to Preston’s horrible realisation, he wakes up in a mere 30 years, while his 4,999 fellow colonists are in suspended animation for another 90 years, and will only awaken four months prior to the spaceship’s arrival at their destination.

Despite his mechanical engineering skills, Preston is unable to repair his sleeping chamber for rehibernation, and his only other companion is an android bartender called Arthur, played by Michael Sheen. Running out of options, Preston sends a message back to Earth that will take 55 years for a reply, and will cost him $6,000. With nothing else to do on a vast ship, Preston takes full advantage of every amenity that the spaceship has to offer — including exclusive services of a luxury liner like high-tech entertainment and classy wining and dining meant for VIP passengers.

However, after a year, his loneliness on the vast ship drives him dangerously close to committing suicide, but as fate would have it, he discovers a sleeping beauty — a fellow passenger and writer called Aurora Lane, on whom he develops a crush. From then on, learning about her becomes an obsession and the more vlogs he watches of her, the more he is faced with an ever-increasing temptation to awaken her — which he does, caving into his human fallibility, but he makes it look like an accident. He carefully nurtures a friendship with Lane for future companionship, but the android gives away Jim’s deception.

Understandably upset at a life denied her, Lane accuses Jim of her murder and cuts him off completely. However, assorted events overtake the spaceship as other systems start failing and the duo is forced to band together to save the Avalon, which is breaking down rapidly. Another pod failure awakens Gus (Laurence Fishburne), the Chief Deck Officer, who gives them vital directions to guide the ship to safety as his own body starts failing. The movie goes through the motions of human behaviour — rising above human failings on occasion, and failing at other times, but never losing hope.