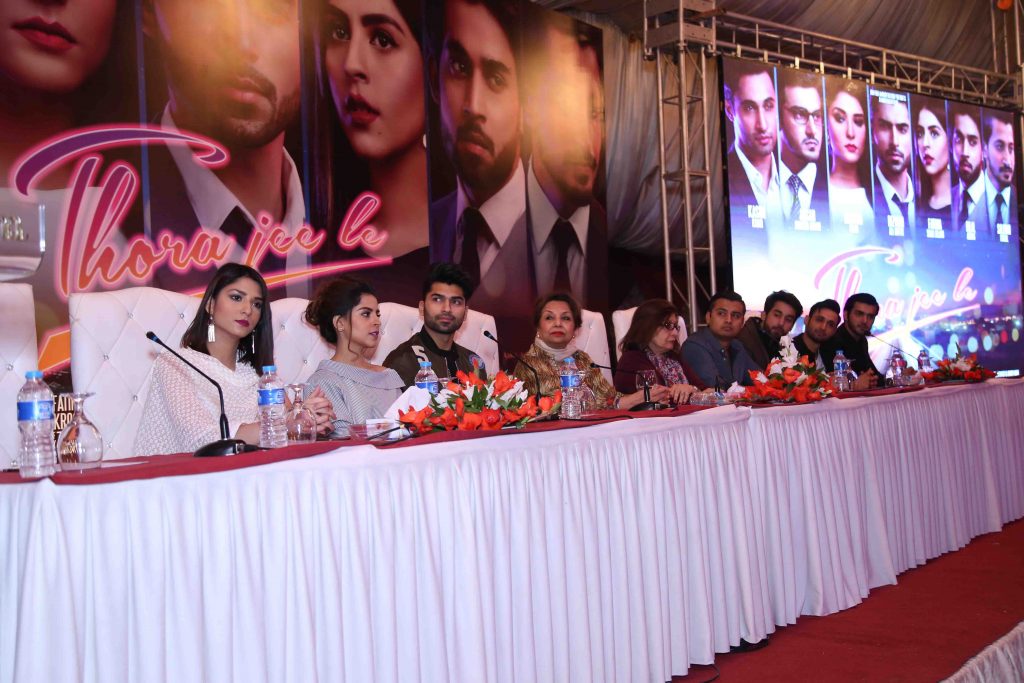 Thora Jee Le, directed and written by Rafay Rashdi, and produced by his mother, TV personality Mahtab Akbar Rashdi, premiered at Nueplex at a well-attended and glittering red carpet event on January 19. There had clearly been more passes distributed than there were seats in the theatre, and so, a crowd. But it was heartening to see the cinema so full again post the ban on showing Indian films — the mainstay for local film audiences.

Fatima Shah Jillani, who plays the role of Bahar in the film, disclosed that it was a first for the entire cast — super model Rizwan Ali Jaffri (Kaizaad), Kasim Khan (TC), Ramsha Khan (Misha), Bilal Abbas (Party), Salman Faisal (Andy) and Ahsan Mohsin Ikram (Azaad). Yet, she maintained, the narrative was one that all of them, and many in the audience would be able to relate to.

This project seemed to have a made-for-success formula — but there’s many a slip betwixt the cup and the lip, or in this case the cut and the viewing. It is, on the face of it, a tale about friendship and the ups and downs that are inevitable in all relationships over the course of time. Having said that, if Thora Jee Le so much as just breaks even at the box-office, it will speak volumes about how dedicated the Pakistani audience is with regard to its support for a local film industry revival.

The story begins with six friends at university together, and then, quite abruptly, jumps ahead to show how life does not turn out how any of them had envisaged. Misha is unhappily married to Azaad, and Kaizaad, the poor little rich boy, has everything but love. TC is actually poor and does not let you forget it. Andy is the happy-go-lucky mediator of the group and Bahar is the fashion-obsessed, bouncy, socialite. Lastly, ‘Party’ – the main protagonist, is a hedonistic DJ, as suggested by his overtly obvious nickname. The music has stopped playing for him because he is spiralling into a drug abuse problem, fuelled by depression. His addiction to cocaine and his meaningless lifestyle have left him alienated and psychologically drained and during one such decadent night, things get out of hand, resulting in Party almost dying from a drug overdose.

This tragic incident and their common goal of saving Party is what brings the six college friends back together. They decide to go on a road trip to interior Sindh and stay at Kaizaad’s ancestral home to rejuvenate Party’s will to live and help him work towards a normal healthy life. So far, so good. But thereon the problems begin.

The plotline had potential but has been massively mishandled. The characters are painfully one-dimensional and the acting atrocious. Andy is a ham, over-doing every single line he delivers; Bahar shrieks unnecessarily; while Kaizaad, undeniably good-looking, displays too much facial intensity in every scene. It was wonderful to see new faces on screen, but was it too much to ask for them to be able to act — even just a little? The film also mishandles the issue of depression — a prevalent mental health issue in Pakistan — as well as drug misuse. And even more bizarre, the storyline seems to okay the drinking culture as it is shown to be “still better than taking drugs.”

Thora Jee Le’s soundtrack, meanwhile, is underwhelming, and to add insult to bad music and acting are the torturously awkward dancing attempts by the actors.

Not surprisingly then, many in the audience walked out of the movie during intermission.