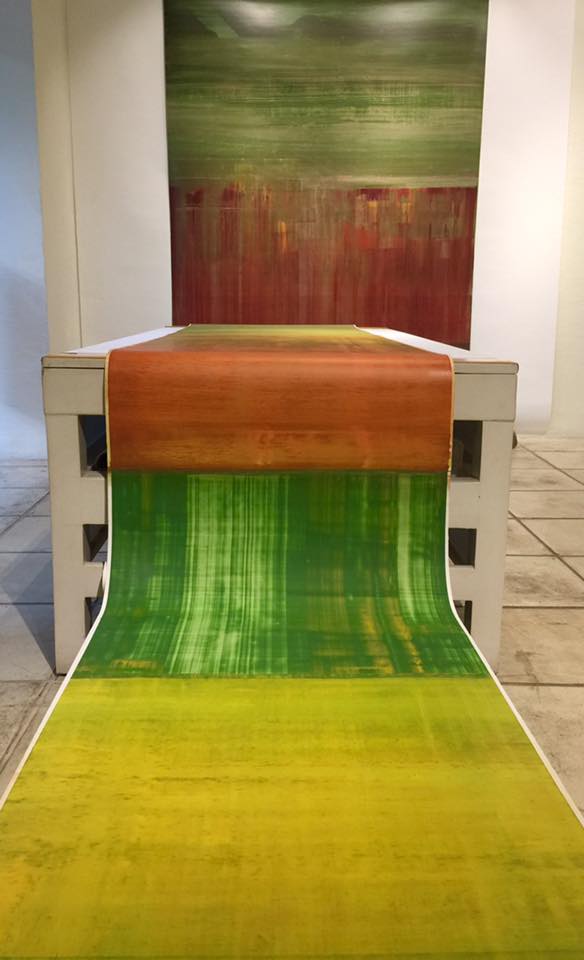 Gallery space is traditionally used to showpiece finished artworks. By setting up temporary studios within the gallery, the artists brought their working methods into the public arena. They exchanged privacy for a permeability that involved interacting with each other and with walk-in strangers. The curator intended to break the insularity of the gallery space and “to create a dialogue between the artists and those interested in engaging with them and observing the process, and to provoke artists to respond to the gallery space surrounded by a cafÃ© and a boutique.” 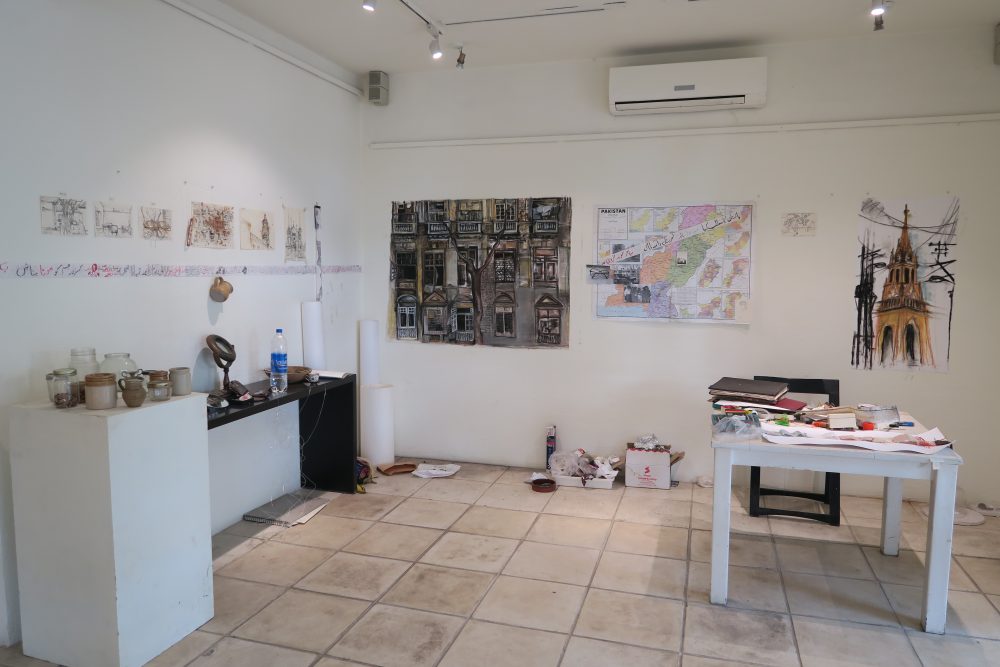 The artists established their work stations in various corners within the free-flowing interior of Koel Gallery. The viewer who browsed the gallery could feel the changes in energy from one artist’s corner to the next as palpably as if walking into separate rooms. The differences in work materials and artistic concerns created distinctive signatures in energy.

Each of the five artists was recording traces of materiality in their work, but the nature of the material differed widely. 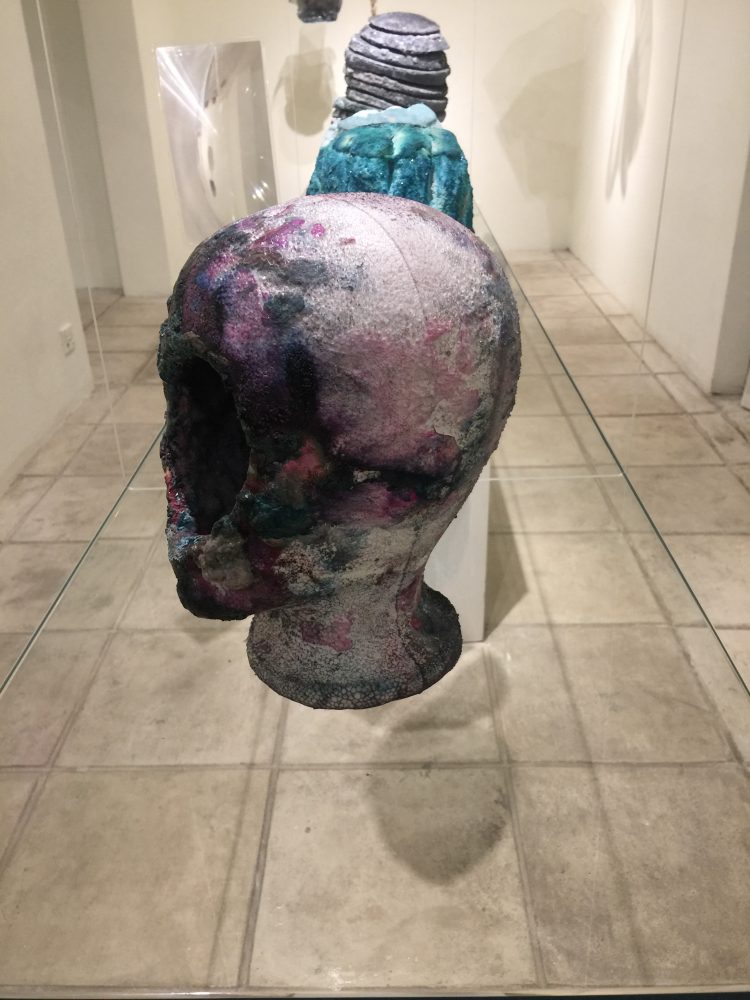 Ayessha Quraishi took her inspiration from the deep movements of the Earth’s crust by reinterpreting the function of a seismograph. Her large table was set up to mimic the kinetic sheet of a seismometer. Whereas the seismometer records objectively, Ayessha, in her role as artist, records her perceptions by making marks of a subjective nature. She states: “The power of art lies in the capability of the artist to distil the invisible along with the physical…in recording the moment.”

Sara Pagganwala is fascinated with the chemical processes of salt crystallisation. She performs as a scientist and an artist rolled into one. She has pans and buckets of various salt solutions such as potassium ferricyanide, copper sulphate, borax and alum undergoing crystallisation. The solutions yield crystalline structures which are unique to the individual substance, much as the artists’ work evolves with their unique signatures. Sara “seeds” various objects, including mannequin heads, with the solutions and they are eventually covered by the mature crystals which have grown on the substrate. 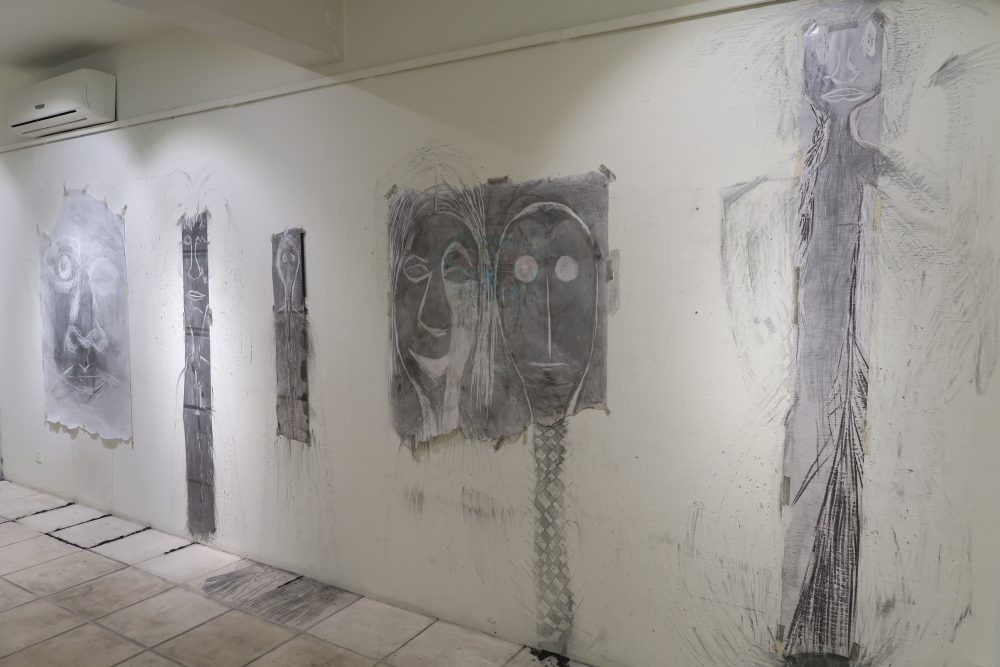 Yasser Vayani and Sarah Hashmi engage with the material products of human culture. Vayani uses found objects and reassembles them into installations. His workspace expands with the detritus of human consumerism: discarded bottles, cigarette packets, pill packs, etc. are arranged on the floor by hierarchy of height, waiting to be remodeled into art that is antithetic to the commercial value which each object embodied.

Sarah Hashmi is an archivist. She records “conversations, oral histories, objects, maps, aroma and drawings”. Her focus is centered on Empress Market and she uses an Iranian restaurant called Jehangir Hotel to sit and make her observations and drawings. Her space within the Gallery is highly eclectic. There are maps with photographs, drawings of trees and of colonial buildings in the Saddar area. Flea market objects such as old spectacles and lighters are rearranged on a table like so many museum artefacts. She revels in the energy of the old and faded. 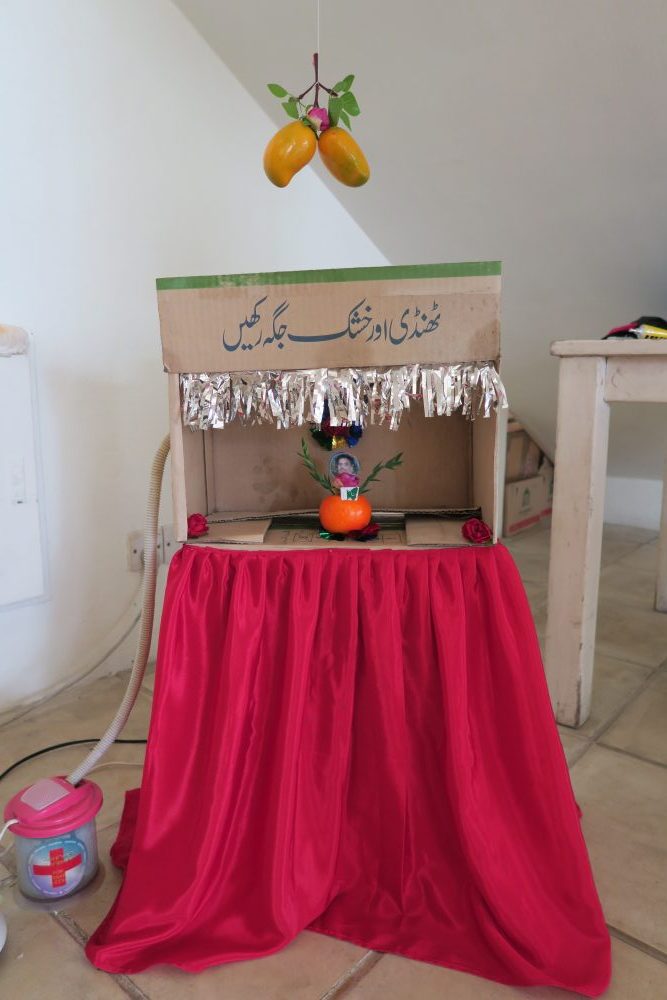 Ammara Jabbar’s cryptic statement on the wall plaque reads: “the acrobat, the apostrophe, turmeric, laundry starch, silk, petals, piety, vapor.” Her space displays suspended objects which — the curatorial note informs us — serve as metaphors for gender roles. Pillows covered in floral prints dangle from ropes and fruit plays a prominent part. The language of metaphor is extremely subjective and quite difficult to decipher.

Towards the end of the residency, the Gallery opens its doors for the formal display of work accomplished in the four-week period. Gone are the laptops, the tables loaded with paints and brushes, the buckets and litter. What remains, yet shows no trace, is the synergy of the shared space within the matrix of which the art has developed — an invisible record of time that the artists will construe in memory.