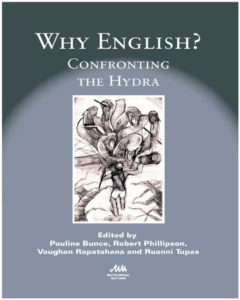 The book under review is a collection of 24 articles with a foreword by Professor Tove Skutnabb-Kangas, and an introduction by the editors. An afterword by Ahmed Kabel brings the work together as a conclusive whole. As anyone at all familiar with the academic discourse in the teaching of the English language will immediately understand, this is the latest endeavour by people who have not accepted the hegemony of English without question: rather, they have chosen to make people conscious that English has become a hydra, in the sense that it is weakening the other languages of the world.

Indeed, writers, like Robert Phillipson and Tove Skutnabb-Kangas, have been raising key questions about this hegemony for a long time. In a sense then, this volume revives some of these old anxieties, with the help of new case histories of countries as diverse as Iceland and China, and helps explain what precisely is at stake in the field of education in general, and language-learning in particular.

The first section, titled ‘hydra at large’ looks at the expansion of English all over the world. Mazrui, who looks at a broad canvas from Africa to the Arab world, however, points out that “there are also anti-hegemonic forces of cultural resistance that continue to challenge the imperial push for one linguistic superpower in favour of a linguistically multipolar world.”

To this Phillipson adds that, as before, subtractive multilingualism promoted by the continued dominance of English, “fraudulently legitimates political and racist dominance,” and continues the linguistic imperialism about which he has been writing for decades. In Singapore, Ruanni Tupas points out, many people want English to be declared their mother-tongue, which if enacted, would put many ancient tongues in danger of dying. Such danger to mother tongues could also be a product of the state promoting a ‘national language’ such as Indonesian in Indonesia which, Hywel Coleman points out, is like a snake (naga) devouring them all while being devoured itself by the serpent of English.

Case studies, which are the strength of this book, tell us about Japan (Kubota and Okuda); Iceland (Kristinsson); Bulgaria (Templer); Mauritius (Collen et al); Africa (Heugh et. al); Pakistan (Mustafa); India (Rao); Hungary (Kontra); China (Gao and Rapatahana); and Brazil (Jordao), etc. There are also studies of language use in the call centres (Boussebaa); voluntary English-language teaching (Bunce); the difficulties of the script itself (Bunce); endeavour to retain one’s heritage language (German) in the United States (Demont-Heinrich); and the complex relationship with identity and language in the US-Mexico borderlands (Martinez), etc. The book has sections of personal engagements which provide a creative understanding of the emotional aspects of struggling against dominant trends.

With a large, diverse and rich canvas it is difficult to provide an understanding, even a synoptic one, of every case. General trends, however, can be isolated for attention. First, let us take the case of European countries which were never colonised by English-speaking countries, Iceland for instance. Here, the English language has become the preferred language for internet communication, threatening the use of the mother-tongue. In Bulgaria, as in Pakistan and India, parents themselves oppose “anything but English for their children,” and in Hungary the language policy is characterised by such incompetence that English keeps gaining access to linguistic domains. In short, in Europe too — though for reasons other than direct rule — English is contributing to the erosion of the power of mother-tongues.

In Asia, even in countries where English-speaking countries have not ruled directly, the state of affairs is similar, probably even more grave, than it is in Europe. In Japan, English permeates society in the guise of a skill — one which is necessary to communicate with the world. However, it is sustained by two myths — global language and economic benefit — and both are linked to neo-liberal capitalist ideologies. In China it has been promoted by the authoritarian state as a cornerstone for modernisation, but now threatens even Mandarin (which, as in Indonesia, is a hydra for all the local languages).

In ex-colonies, such as India and Pakistan, the damage to the local languages is most obvious. In India, English is necessary for good jobs. Not being good in it can blight one’s future. In this sense it is a barrier to be overcome. But, paradoxically, it also “holds the promise for Dalits and other socially excluded groups to bypass the rigid hierarchies that exist in Indian languages.” Despite this promise, it serves class interests and reproduces social inequalities since everyone cannot afford the expensive English-medium schools which teach it well.

This situation is also true for Pakistan. Veteran journalist Zubeida Mustafa, for instance, interviewed a girl called Nadia who wanted to become a doctor. The girl could only answer the questions posed to her, because she was allowed to use her mother tongue. Unfortunately, formal systems of education, do not allow this, contributing to subtractive multilingualism. There are efforts to teach poor children English so as not to destroy their dreams. This, however, will not change policy. Basically, South Asian countries have a policy of not educating all children in any language at all (despite laws to do so); educating most children at state expense through the vernacular languages (which are not necessarily mother tongues); and educating some children through English. Only the last group constitutes that core of highly articulate South Asians one encounters in the best jobs. This policy is one in which the elites have invested heavily, and there is no immediate prospect of any really significant change in this regard.

Bunce’s essay on the script warns against assuming alphabetical skills, and points out that neuroscience has established that the brain reacts differently for scripts like Chinese. In such meaning-based scripts the brain recognises the meaning first and the sounds associated with them come later. Language teachers usually do not have the benefit of such insights.

The book has one central message expressed as follows in the case of Mauritius: “the aim is not to slay the English and French Hydras, but to stop them stifling the mother tongues.” This is best done by “unlearning,” and the decolonisation of our personal and professional thoughts and identities, as done in a study on Brazilian English-language teachers, which is also a matter of deliberate policy rather then a moral ideal to be pursued by some motivated individuals. Indeed, the whole purpose of the book is to make people sensitive to the linguistic needs of a globalised world, which is not sensitive to the local, to difference, and to anything which does not make money. And one of the ways of making money with no sensitivity for the underprivileged is the call centre industry. The demand for American (or British) English on workers often losing sleep to earn some money, is so exploitative that it is a wonder that it has not been confronted. Here the linguistic need is to accept local accents and make clients in rich countries respect them as part of globalisation. But, of course, the narrative of deficiency is reserved for the underprivileged, making their needs turn into a discourse of their deficiency, stupidity and shamming (when they pretend to be speakers of English). The book points out these facts of our unequal world.

In this sense, then, the book offers a critique of not just linguistic hegemony, but also of the increasing power and hegemony of international capital. National elites, in so far as they are sensitive to these issues, sometimes issue policy papers on the dominance of English, but retain it to empower their own hold on power and to access the privileges of the Centre. Such lukewarm policy statements do not actually change the structure of power which is in favour of the elite, which often gains from their knowledge of English. The book issues warnings, which is a very important contribution to ELT as practiced nowadays, but it does not give a solution. Of course it suggests the ideal of resisting subtractive multilingualism, but how is it to be done when the elite, parents, employers and teachers themselves — to say nothing about the educational entrepreneurs who own for-profit English-teaching institutions — are in the business of defending the hydra? Perhaps there is no answer!