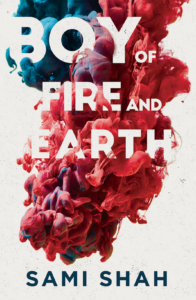 Belief in djinns is deeply engrained in the cosmological consciousness of Pakistanis and arguably, the Muslim 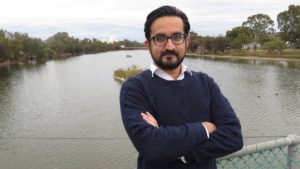 world at large. The Quran mentions their creation by God out of smokeless fire. They are regarded as paranormal entities that exist in an alternate realm to the human one. Sami Shah brings the full weight of this belief to bear on his novel titled Boy of Fire and Earth. Fantasy and eschatological belief intersect seamlessly as Shah embellishes elements from the collective consciousness of Muslim folklore into a work of fiction.

The author is known to Pakistanis as a satirist and stand-up comedian. His two-part novel is more likely to make the reader stand up with fright. In a story told with panache and hi-octane energy, Shah makes djinns interact with humans in unexpected ways.

Wahid is the central character of the novel. He is a unique boy, made of fire and earth. He was given to an issueless couple as an infant and they raised him as their own. He is seven when he sees his first djinn. When Wahid is 18, paranormal forces seriously invade his space and with considerable malevolence. He is driving his friends Arif and Maheen — a girl he is keen on — back from a party when his car is made to crash. Arif dies on the spot. Maheen is severely injured. Wahid himself is barely harmed. A female djinn who has materialised with her partner tries to strangle Wahid and is destroyed by him, much to the horror of the male djinn who cannot believe a human has been able to destroy a ‘Marid’ djinn. He takes revenge by removing Maheen’s soul from her body, leaving her comatose with little chance of recovery.

In the wake of this confluence of disasters, all semblance of normality departs from Wahid’s life. He has inexplicably been targeted by djinns. Quite amazingly, he has managed to kill a djinn, seen a human soul sucked out from its body and become the focus of Maheen’s father’s vengeful wrath. This point in the novel marks the commencement of Wahid’s epic disaster management journey in which he begins to understand profound truths about himself.

The multifarious characters and locations allow for highly descriptive passages, such as when a chudail (witch) with her backward-facing feet, changes form: “Eyes swelled in the empty sockets, brilliant white sclera unfurling like the petals of a lily.”

The author’s voluminous imagination revels in descriptions of parallel realms through which Wahid traverses on his way to ‘Kaf,’ the world of djinns. There is a universe of nothing. There is a place outside time. There is ‘Barzakh.’ Wahid encounters various entities — ‘Marids, Qarins, Ifrits, Grines, Ghouls’ and other fantastic chimerical creatures. There is no time to pause in this roller-coaster journey but there are interesting contrasts to be made between primal creatures such as the ‘Magogs,’ who utterly lack nuance, with the messy nature of human complexity.

Boy of Fire and Earth fits comfortably into the fantasy genre which is immensely popular because of writers such as J. K. Rowling and Ursula K. Le Guin; no less because of the movies based on J R R Tolkein’s Lord of the Rings series, and video games such as The Elder Scrolls. Wahid himself is shown reading Michael Moorcock’s Eternal Champion during the school lunch break.

Besides the Tolkeinesque aspects of the novel, there is also a strong Dickensian current as the author stitches the dark underbelly of Karachi onto the fantastic elements of the story. Surreptitious agencies stalk the unsuspecting with nefarious intentions. The squalor, the unease, the greed, neglect and brutality that abound in the mega-city are conveyed brilliantly through characters such as Professor Rahim and the urchin Badshah who embodies the raw resilience of Karachi.

There is considerable pathos and compassion in the way Shah incorporates the urchins of Karachi into the mainstream narrative. Badshah — the leader of an urchin gang — is a feisty counterfoil to the genteel Wahid who, despite his travails, has enjoyed privileges that are beyond the reach of the marginalised.

The city’s landmarks such as the Karachi University, Boat Basin, Abdullah Shah Ghazi’s shrine are strewn through the story. The grit and grime of the city are abundantly manifest: “Exposed brick gleamed with moss and sweated in the heat, frog-coloured puddles of gutter water reflecting the tangle of wires above.” The details successfully ground fantasy to known reality. Through hyper-realistic description, Karachi becomes a surreal realm as much as any imagined universe.

Sami Shah has had two books out this year. Following his relocation to Australia from Pakistan, he made a TV series examining the role of Muslims in Australian society titled The Islamic Republic of Australia. This has been released in book form. With the publication of Boy of Fire and Earth, Shah’s writerly footsteps firmly point forward.