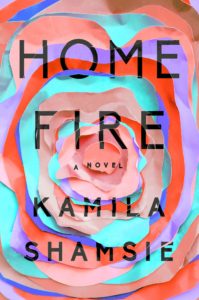 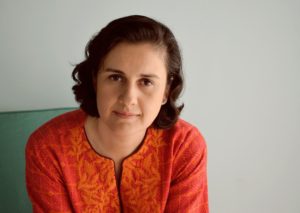 its official release) begins with a scene that will resonate with Muslims around the world: an interrogation at an airport, where the very fact of your Muslimness, no matter your nationality, makes you suspect (if a Muslim hasn’t experienced this directly, they have, in today’s political climate, at least imagined its very possible occurrence).

Isma, a British Muslim of Pakistani descent, is leaving London and her beloved younger sister, Aneeka (there’s also a younger brother, Parvaiz, although Isma is trying very hard not to think about him) behind to start her PhD programme in the United States. But before she can get on the plane, she is taken to an interrogation room where she valiantly tries to reconcile the seemingly contradictory facts of her Britishness and her Muslimness. Shamsie describes the scene with a wryness that highlights the absurdity of such an event (“He [the interrogator] wanted to know her thoughts on Shias, homosexuals, the Queen, democracy, The Great British Bake Off, the invasion of Iraq, Israel, suicide bombers, dating websites.”) and prevents the whole episode from veering into melodrama — a feat she manages to uphold, for the most part, throughout the novel. This ability of the novel, to grapple with weighty subjects — citizenship and Islamic militancy, familial love and national loyalty, faith and politics — with a lightness of touch, is all the more remarkable given the fact that Home Fire is a contemporary reworking of Sophocles’ ancient Greek tragedy, Antigone.

In Sophocles’ play, a young woman is forced to choose between fidelity to the state and loyalty to her dead, traitorous brother, whom she wants to give a proper burial despite his treason, thus violating the law of the land. Shamsie’s novel, while set in contemporary London, Massachusetts and Raqqa, and culminating in Karachi, rather skillfully explores the Sophoclean themes of the play, although its resemblance to the tragedy becomes more obvious only in the third act of the narrative. As in the play, the novel centres on a close-knit trio of siblings: Isma, the older one, more sedate and composed than her younger siblings; the mercurial and passionate Aneeka; and the quiet and impressionable Parvaiz. Like the siblings in Antigone, haunted by their father Oedipus shameful deeds, Shamsie’s characters are likewise haunted by a dark family legacy: their father, whom only Isma knew as a child, was a jihadi who fought in Bosnia, Chechnya and Afghanistan, and got caught and killed en route to Guantanamo.

While Isma harbours a deep resentment against the father who left her as a young child, and Aneeka is fairly indifferent to the memory of a man she has never known, it is Parvaiz, lost and feeling increasingly untethered to his two sisters, who is compelled to find out more about their father. His yearning for belonging and for a definite sense of masculine identity makes him easy prey to a charming, macho IS recruiter, who soon convinces him to join the media wing of the militant group in Raqqa. While Isma deals with this betrayal by embracing a sense of familial inevitability (“…his father’s son; a fecklessness in the gene pool.”), Aneeka comes up with a plan to get her brother back home — a feat made practically impossible, given the British law that revokes citizenship of dual nationality-holding citizens who are suspected of terrorism. To that end, she begins a love affair with Eamonn, the son of British Home Secretary Karamat Lone, a cunning politician of Pakistani descent who “used his identity as a Muslim to win, then jettisoned it when it started to damage him,” and who expounds on the “backwardness” of British Muslims to secure his political power.

Divided into five slim sections, each narrated by Isma, Aneeka, Parvaiz, Eamonn and Karamat, the novel is a departure for Shamsie in terms of style. She exchanges her usual languorous and lyrical descriptions for a brisker pace and a rapidly moving narrative. The fast pace is both an advantage and a disadvantage: right from the beginning, the events of the novel continue to gain momentum until its crashing climax, effectively building enough tension that warrants the explosive finale it culminates in; the very end of the ending teeters on the edge of, and does slightly veer into melodrama, but the narrative has built so much dramatic tension to reach this point, you almost don’t mind.

On the other hand, the briskness of the narrative sometimes occurs at the expense of more thorough character development and a more in-depth exploration of some of the themes the novel wants to grapple with. The section exploring the IS recruitment and the propaganda they resort to, for example, is fascinating and could have benefited from more narrative time. Shamsie’s depiction of the IS recruiter’s preying on Parvaiz’s isolation, both his political and social isolation — as is the case of many Muslims in the West and the Islamophobia they have to contend with — is intriguing and merited more reflection. As did Parvaiz’s disillusionment and desire to escape when the ground realities of IS in Raqqa fall far short of the idyllic state described to him (“There is a place like that we can go to now. A place where migrants coming in to join are treated like kings…a place where skin colour doesn’t matter.”). The extent to which the recruiter leaned on Parvaiz’s masculine identity, which he convinced Parvaiz was being stifled by his two stronger sisters (“They want you in the house, doing their shopping and mowing the garden, so they’ve tried to keep you a boy, a child in need of a mother”), and the misogyny underpinning the propaganda was also deserving of more exploration. Despite these shortcomings, however, Home Fire is a timely and powerful novel, tautly plotted and with memorable characters, which asks big questions about the nature of justice, loyalty and love.