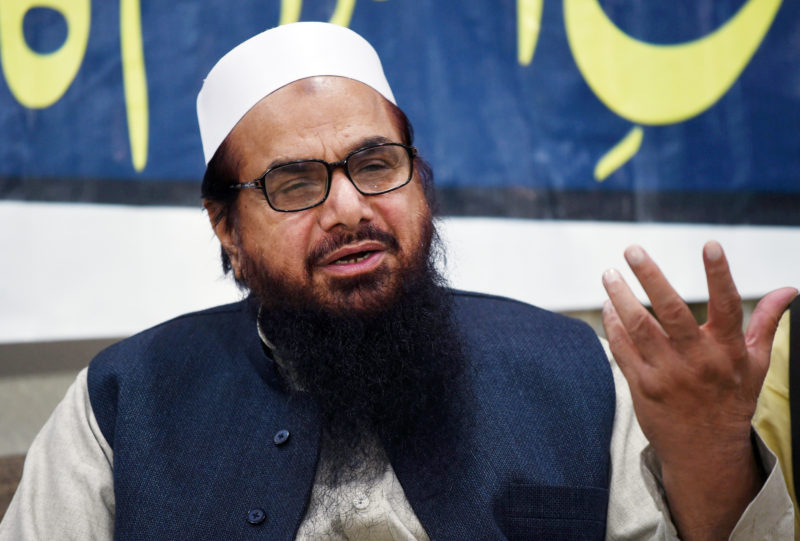 On Sunday, August 8, the proscribed outfit, Jamaat-ud-Dawa (JuD), formally announced the launch of an affiliated political party, Milli Muslim League (MML), under the leadership of Saifullah Khalid. JuD was banned as a terrorist group in 2015, and its chief, Hafiz Saeed, has been placed under house arrest since January 31 this year.

The press release announcing JuD’s launch of the MML highlighted the aim of the party’s foundation. “We want immediate release of ‘Mohsin-e-Kashmir’ Hafiz Saeed,” says the party spokesperson, Mohammed Ehsan. “Sovereignty lies with the Quran and Sunnah as per Pakistan’s Constitution. But this is not reflected in the country, which is being pushed towards liberalism and secularism through a proper agenda,” he adds.

The core ambition of the MML is to ‘make Pakistan a truly Islamic welfare state’ and ‘liberate Kashmir.’

The party held its first mass meeting in Islamabad on August 14 — Pakistan’s Independence Day — to “show its strength.” At the rally, the party formally confirmed that it would be fielding a candidate opposite the Pakistan Muslim League Nawaz (PML-N) candidate for the NA-120 by-election, Kulsoom Nawaz. MML’s Muhammad Yaqoob Sheikh has filed his nomination papers with the Election Commission of Pakistan (ECP) as an independent candidate, since the party could not be registered in time for the by-poll. MML has particularly targeted the ruling PML-N and the ousted Prime Minister Nawaz Sharif with scathing criticism.

“It is owing to his friendship with (Indian PM) Narendra Modi, that Nawaz Sharif tried to put Hafiz Saeed on the Fourth Schedule of the Anti-Terrorism Act, 1997,” says, MML leader, Prof Hafiz Abdul Rauf.

“The party is toeing the line of the US and India and betraying the people of Kashmir, which is against the vision of Quaid-e-Azam,” he added. “Pakistan was created on the basis of the Kalimah, and cost us the blood of millions of Muslims. The reason why the state was created under Quaid-i-Azam Mohammad Ali Jinnah and Allama Iqbal is not something that is on display in Pakistan,” says Saifullah Khalid. “The foreign powers have managed to divide us along sectarian, sub-national and ethnic lines. Foreign interference is increasingly growing. This means that there is a void, and to fill that we have, by the grace of Allah, the ideology of Pakistan.”

The party president says that just like Jinnah united the Muslims of the subcontinent under the umbrella of ‘La Ilaha Illallah, Muhammad Ur Rasool Allah,’ the MML would try to do the same, and continue the work of the Dawa.

JuD is an offshoot of the Lashkar-e-Taiba (LeT), also founded by Hafiz Saeed, which is linked to many acts of aggression in both Kashmir and Indian territory, including the 2008 Mumbai attacks. LeT was formally banned in Pakistan in January 2002, which led to the creation of JuD.

“This rebranding will continue till the government comes up with a clear-cut policy in this regard,” says security analyst Amir Rana, director of Pak Institute for Peace Studies (PIPS). “Either reintegrate the groups that have potential following a deradicalisation process, and take decisions against those that don’t have this potential. There is no plan in this regard from the government.”

“I don’t think the government is interested in containing these groups, since it has a right-wing Islamic orientation, which they share with these groups,” says political scientist Hassan Askari Rizvi, author of Military, State and Society in Pakistan. “In fact, it is the support of these very groups that helps the PML-N win votes,” he adds.

Rana believes that without a proper parliamentary role, militant groups would continue to reinvent themselves.

“The Parliament especially needs to discuss the future of those groups that have been state assets in the past, which now have a firm network and a support base. They shouldn’t be completely excused for all that they’ve done.

“There should be a mechanism whereby these groups follow a proper code, pay allegiance to the Constitution of Pakistan, vow to end militant activities and join the political process. Till this happens, they would continue to rebrand themselves — their militant wings would remain active and their radical tendencies would remain intact.”

However, the government officials repeatedly claim that they are willing to do more, but are pushed back by the military establishment. Last year’s Dawn Leaks scandal, in fact, claimed that the civil and military leaders were at loggerheads over this very issue, and Hafiz Saeed’s name was specifically mentioned in this regard.

“Do the civilian leaders have any evidence to support these claims?” asks Rizvi. “They should make a firm statement and face the consequences. That would clarify that they want to do it, but the army won’t let them. Is there any evidence? Any statement? Any action? So this is basically an excuse to not do anything, otherwise there would be some indication.”

Rana underscores that people have a soft corner for those groups that claim to limit themselves to the Kashmir jihad. “But then these outfits result in creation of new groups, which overlap with Al-Qaeda and IS etc. The reiteration of fighting for Kashmir is a camouflage designed to garner sympathy and support,” he says.

Hassan Askari Rizvi adds: “We have to decide if we want to provide these militants any space with regards to the Kashmir issue. If that’s the case, then obviously these groups would survive. And that’s our collective stance — both the government and the army soft-pedal when it comes to those groups that align themselves with the Kashmir cause.”

Amir Rana also says this issue isn’t limited to one group or Kashmir-bound miliants. “There are many groups with question marks over their status and future. This is where the Parliament has to step in: the previous policies of the state need to be reviewed. Acknowledge the mistakes wherever needed, and form a commission to decide the groups’ future in the mainstream.”

He adds: “The government, the executive, cannot act on its own, owing to political and security constraints. So the Parliament needs to take responsibility. Wherever in the world, we’ve seen this process, it has taken place in two ways: either through a referendum — as in Algeria — or the Parliament and political actors — like in Yemen during Hadi’s last tenure. There is no third solution.”

On August 21, US President Donald Trump accused Pakistan of “harbouring terrorist sanctuaries” when unveiling his Afghanistan policy in Washington. That came five days after the US sanctioned the Azad Kashmir-based Hizbul Mujahideen (HM) as a “foreign terrorist organisation,” three months after blacklisting the group’s leader, Syed Salahuddin.

“The government of Pakistan condemned the sanctions placed on Hizbul Mujahideen, which means that they support these groups,” says Rizvi, adding that Pakistan needs to evolve an approach that satisfies the international community.

“The viewpoint that there are no safe havens for these groups in Pakistan is not accepted at the international level; Pakistan will have to do something to make itself credible.”