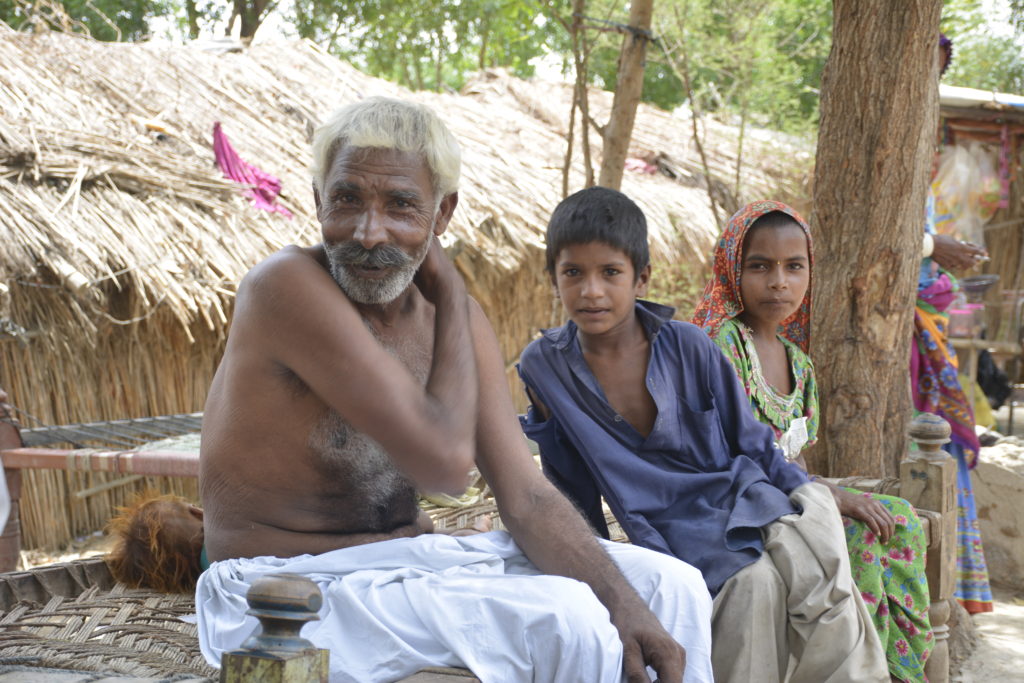 Damro Bheel with his children: Refugees in their own country.

Photos by the author

With a white walrus moustache, Damro Bheel, father of seven, never thought that he would one day be living like a refugee in his own country. Hailing from a small village near Cachhro in Sindh’s Thar Desert, his family owned a small piece of rain-cultivated land. “The life was simple,” he said. “We were dependent on rain-fed agriculture and after every monsoon, we got enough food for the entire year.”

As he grew up and his family became larger, the food from the rain-fed land was not enough to feed so many mouths. He bought some cows and goats and began farming livestock to make both ends meet. “During droughts, livestock was our only source of livelihood,” says Bheel.

Although Tharparkar has a long history of droughts, elders say that the phenomenon became more frequent in the region after the 1970s. But from the late 1990s, droughts became severe and continued for many years. As a result, most of the traditional farmers switched to livestock. They either stopped crop cultivation completely, or did so only to obtain fodder.

Climatologists say that climate change is altering rainfall patterns and Tharparkar is one of the worst hit regions. The variable rain patterns have not only destroyed agriculture and forced the locals to change their ancestral profession, but even when they became herders, extreme weather events like droughts chased them down and forced them to leave their native areas for the survival of their livestock.

“Whenever the region is hit by a severe drought, these farmers-turned-herders start travelling north and west, to the different districts of Sindh where the water of the Indus is accessible through irrigation networks. This way, they can find food and their animals can survive,” says Bheel.

Usually, influential landlords don’t allow these herders to feed their animals near their lands. And so, they start working on these lands for a daily-wage. Bheel worked as a farmer on the lands of an influential in Loonkhan town, near Khipro, in Sanghar district. “Landlords allow us to make huts on their land, they provide us with food instead of cash against the work we are doing on their farms,” explains Bheel. “We are also allowed to take grass for our animals.”

But many daily wage-workers took loans from the landlords and became full-time farmers on the agricultural lands of these feudal lords. “We were not shareholders in the crop. These landlords were providing us with food and despite bumper crops, they would say that we still owed them money,” says Bheel. 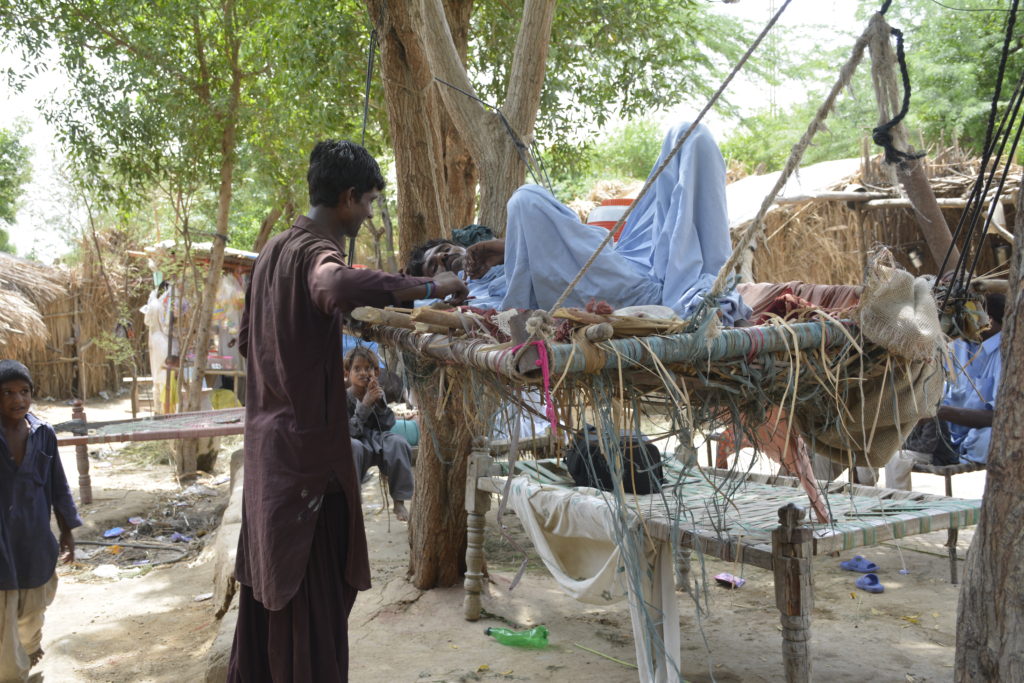 The volume of the loan increased every year, and the landlords did not allow them to go anywhere or work someplace else. Thus, these herders, who had yet again reverted to agriculture, became bonded labour on the lands of these powerful feudals of Sindh. Later, these bonded labourers approached the Human Rights Commission of Pakistan’s (HRCP) Hyderabad Chapter for help.

Quoting The Bonded Labour System (Abolition) Act of 1992, the HRCP freed the bonded labourers from the custody of the landlords. Later, they were relocated to empty government land that was declared a ‘Hari Camp’ where they could live.

Dr. Ashothama Lohano, Co-ordinator, Special Task Force, HRCP, Hyderabad, told Newsline that since the 1990s, thousands of families had been freed from the custody of local landlords. “There were around six camps near Hyderabad district and more were set up in other districts, so that these labourers could live there peacefully,” said Lohano.

Hari Camp Kotri, where Bheel lives with around 150 families, is one such place. This slum is located behind the shrine of Baba Salahuddin on the National Highway, outside Kotri city. Comprising around 150 households, the settlement contains makeshift huts without any compound wall or latrines.

This settlement is located inside the protective embankment of Kalri-Balghar Feeder — also known as Karachi Wah — where rainwater accumulates during the monsoon. As a result, it contains a thick forest of wild bushes and serves as breeding ground for mosquitoes. The colony lacks almost all basic facilities such as drinking water, proper sanitation, schools and basic health care facilities. Faith healers treat common diseases and dais (traditional midwives) help expectant mothers deliver babies.

The majority of the residents of the colony are native to Tharparkar and Umerkot districts. These climate refugees are uneducated and lack the skills to make a decent living. So they sometimes start working as street vendors for a living, but that too just keeps them on the fringes of life.

“Some of the people who came with us to this camp, left in search of a better future, but since they lack the required skills to eke out a living, they are still wandering,” says Sajan Bheel, another resident of the colony.

Climate experts say that climate refugees will be Pakistan’s major challenge in the future. 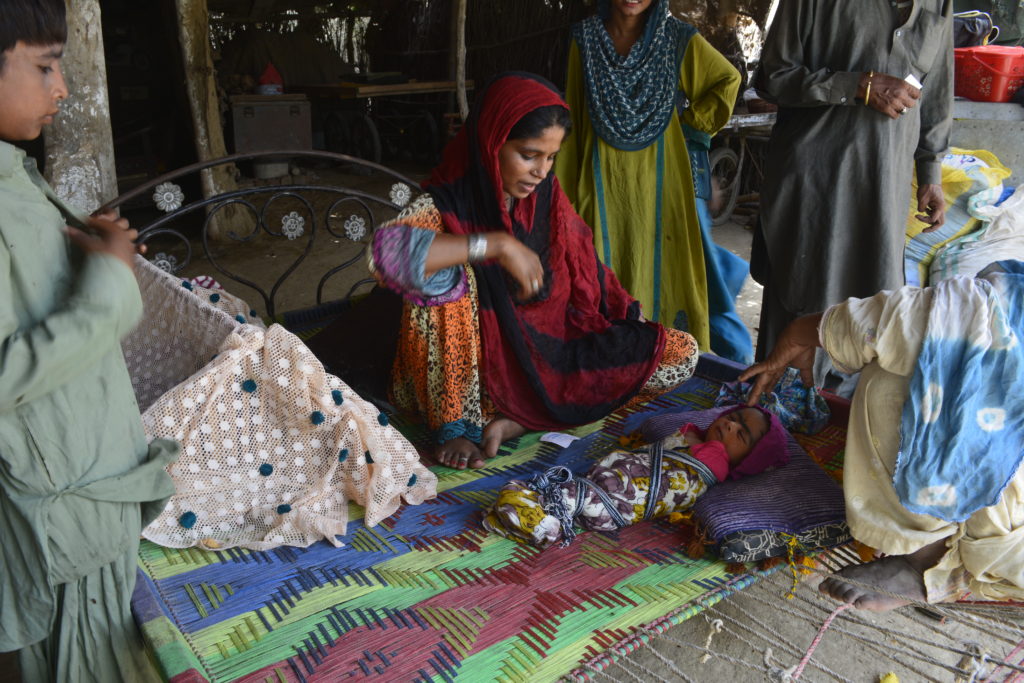 Deliveries in the colony are conducted by dais (traditional midwives).

Dr. Qamar-uz-Zaman Chaudhry, a former Director General of the Meteorological Department of Pakistan and an International Climate Change Specialist at the Asian Development Bank (ADB), says that with every passing day, climate change is becoming a reality that cannot be ignored. “With frequent weather events like floods and droughts, millions of people are uprooted from their native places and become climate refugees,” he explains. “This is the biggest challenge for the country.”

Despite the passage of more than two decades, these victims of extreme weather events are not yet settled. And with prolonged and frequent droughts in Thar and other arid regions of Sindh, more people from these areas are expected to abandon their native places in the coming years.

The author is multimedia environmental journalist based in Karachi. He tweets @amarguriro