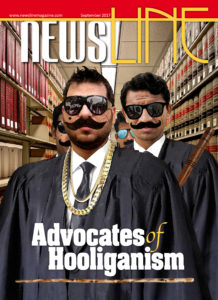 It has taken four years, but it has happened — finally. With nine months to go before the next general elections, the country has a foreign minister in place, courtesy the new Prime Minister.

Presumably in time to meet the challenges of the post-Trump disorder, as the new US-Afghanistan-India grouping rears its head ominously. And, additionally, to calm down the ‘enfants terribles’ of the Foreign Office, who are currently engaged in a grossly undiplomatic war of words, questioning each other’s level of professionalism.

That’s what comes of appointing the not-so-right people to the right jobs. The former PM’s penchant for running a kitchen cabinet, comprising personal favourites and the like, is well known.

Incidentally, we are also landed with a brand new set of ministers, allegedly to keep them from straying away from the PML-N fold — and some for services rendered to Nawaz Sharif in his Panama-hearing days. Remember Daniyal Aziz and Co, who kicked up a storm of words against the PTI outside the Supreme Court.

Unfortunately, they could not save the ex-PM’s crown; subsequently, he jumped into the arena to plead his own case. An ardent supporter of the judiciary under Justice Iftikhar Chaudhry, that put two PPP Prime Ministers in the dock at his behest, Nawaz Sharif has turned his guns on the judiciary now that he is in the dock. The line of argument he is using is dangerous. He is throwing his mandate at the august judges, and questioning their right to dismiss him. The more pertinent question is, does the people’s mandate give a prime minister immunity from prosecution for alleged crimes?

Following close on the PM’s heels are the lawyers, who are increasingly resorting to violence and intimidating judges to secure judgements in their favour. Will justice be secured by the use of sticks and stones, as was witnessed in the recent incidents in Lahore and Multan, involving the president of the Multan bar? Having served as Justice Chaudhry’s foot-soldiers in the movement for the restoration of the judiciary, they have come to believe that their black coats give them a sense of entitlement vis-Ã -vis the courts.

While the kerfuffle between the bar and the bench is not expected to be resolved any time soon, another problem looms large on the horizon — the big bulge in Pakistan’s population.

The provisional results of the census, conducted after a gap of 19 years, are out: Pakistan’s population has shot up by 57 per cent. While political parties quibble over the urban-rural divide in the provinces, which will determine the delimitation of constituencies, the breakdown of parliamentary seats and the NFC Award — and perhaps understandably so — one aspect seems to have been lost on them: the big jump of 2.4 per cent per annum in the population figures. With the resources and civic amenities stretched to the limits, how will the administration cope with it?

The recent rains in Karachi were ample proof — if further proof were needed — of the civic administration’s lack of ability to handle emergencies, let alone the challenge of a burgeoning population.