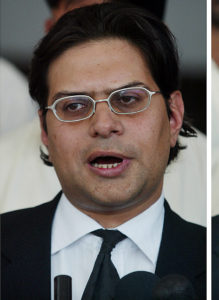 The visuals were amazing. There was the police on one side, using water cannons and tear gas. And on the other, a group of lawyers, tossing stones, chanting slogans, and trying to force their way into the premises of the Lahore High Court (LHC), where contempt proceedings were underway against Sher Zaman Qureshi, the President of the Lahore High Court Bar Association’s (LHCBA) Multan chapter.

When their assault on the court failed, the rogue lawyers made their way to Lahore’s Mall Road, blocked the traffic on one of the city’s main thoroughfares, and disrupted business in the vicinity.

When their assault on the court failed, the rogue lawyers made their way to Lahore’s Mall Road, blocked the traffic on one of the city’s main thoroughfares, and disrupted business in the vicinity.

In short, the lawyers resorted to violence and disrupting public peace — both unlawful activities, when they are sworn to uphold the very laws they were unabashedly breaking.

The contempt case against the LHCBA Multan President is cut and dry. On July 24, he, along with a group of lawyers, barged into a judge’s court and vandalised the premises. The LHC Chief Justice (CJ) took notice of the incident, and withdrew the judges sitting on the Multan bench. The lawyers went on strike, although the Multan bench was subsequently restored. That did not end the matter. Early in August, another group barged into the courtroom of the LHC Chief Justice.

Newsline spoke to noted lawyer Salman Akram Raja about the increasing mob mentality of the legal fraternity and asked him to offer some solutions.

There has been some commentary of late, on how the current situation is evidence of a growing disconnect between the bar and the bench. How do you see this?

The word ‘disconnect’ seems to suggest that there are two valid points of view, between which there is a gap or a communication inability. I don’t see this as a disconnect between two points of view. At the end of the day, the issue really is whether an order of a court — regardless of its merits — should be complied with or not, and there is no disconnect there. Nobody says as a matter of principle that a court order can be ignored on the ground that it is a wrong order, without recourse to a higher appellate forum.

In the Multan incident, the LHC issued a notice to a lawyer, asking him to appear before the bench to explain his conduct. The lawyer concerned refused to comply for a, b, or c reasons, none of which are clear to me. They do not seem to be reasons based on any principle of law; rather they seem to be related to a presumed attack on dignity. Now the idea that a lawyer appearing before a court surrenders his dignity in some sense is unacceptable if the judicial process is to continue in this country.

Thus, a matter of principle has been overtaken by the exigencies of bar politics. And bar leaders who have taken principled positions on various issues in the past, are now falling over backwards, and I would say, not to their credit, in being seen as part of the herd. The whole issue has been reduced to a stampede by a herd in which principles are neither being debated nor being considered.

I’m very clear about the situation. On the one side, there are electoral, political and herd-based exigencies. On the other is a principle at stake.

In your opinion, how will this current impasse be resolved?

I do not see a satisfactory resolution because the numbers are on the bar’s side and the desire to be part of the herd has become so ingrained and entrenched that the various groups involved are unlikely to move away from their positions. There is a real stalemate here, between positions taken by these groups and the LHC. Now one way out, which is being aired, is that the CJ of the LHC (who has taken the correct position on this) gets elevated to the Supreme Court (SC) and a new CJ takes his place. That will provide a face-saving opportunity to the various groups that have banded together to make some kind of a token gesture vis-a-vis an appearance, but not an apology to the new CJ. And then the new CJ can discharge the contempt notices. This will, however, be a most unsatisfactory resolution of the issue, because the question of principle will remain unresolved; by making a kind of settlement, we would be papering over an issue that needs a proper resolution. And it is settlements done in the past that have brought things to this point where not only are the judges in subordinate courts routinely harassed and intimidated, but now the disease has also entered the portals of the High Court. Unless a firm stance is taken, and a principled decision arrived at, you will end up resolving the situation temporarily, while deepening the disease at the same time.

From the time of the lawyers movement, there have been several instances where lawyers have interrupted proceedings and intimidated judges — once a judge was even locked in a courtroom. And then, a group of lawyers gave Mumtaz Qadri, Salmaan Taseer’s murderer, a hero’s welcome. And he was the Governor of Punjab. How do you see this?

There was a clear issue of principle involved in the lawyers’ movement: can a sitting CJ of a country be thrown out by the army chief masquerading as the President? That was clearly not acceptable. Neither the President nor the army chief can throw out the CJ of the country by summoning him to the Army House and asking him to resign. There, the stand taken by the CJ and the movement around that stance was clearly in support of a deep constitutional principle. Now has that emboldened people into mobilising for less worthy causes? It probably has, as it has shown the lawyers that by getting together they can have their demands — fair and unfair — accepted. It is most unfortunate that legitimate democratic power, or the power to associate, is being used for causes and objectives that are unprincipled. But one can’t put the blame for this at the feet of the lawyers’ movement; but on the use of power to associate for causes such as this one.

Within the fraternity of lawyers, there is no consensus on the current situation. Do you think that this is because some of the lawyers are from within the local system and some that have qualified from abroad?

I wouldn’t put it as a disconnect between those trained locally and those with foreign qualifications. All kinds of locally-educated lawyers have also been appalled by the LHCBA’s actions. It’s just that some people are willing to give up on principles, while others are attached to them. There may be a kind of a political division here, where people who are more involved in bar politics feel that standing with a comrade is more important than upholding abstract principles, while those not that involved in bar politics are more likely to support the principle at stake. I would say the extent of involvement in bar politics seems to be determining the attitudes of different groups of lawyers.