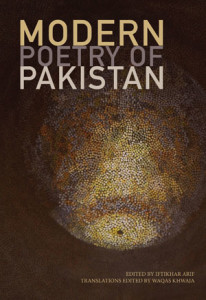 The Riches Of Pakistani Poetry

Throughout the centuries, translations of literary works have influenced the literature of other countries and brought these works to a wider audience. That is why Modern Poetry of Pakistan, a new collection which brings together English translations of work in Urdu and six major languages — Balochi, Kashmiri, Pashto, Punjabi, Seraiki and Sindhi — is particularly welcome.

As Iftikhar Arif says in his preface, “We are a multilingual country, one in which a host of cultures intermingled with folk traditions that have persisted for millennia, informs the national psyche and colours creative expression in all its various forms.”

The anthology includes the work of 44 poets and 15 translators, but the majority of it, particularly in Punjabi and Urdu, has been translated by Waqas Khwaja. As editor and translator, he has the advantage of bringing to the work his own sensibility as a Pakistani English poet. There are some really good translations with truly spectacular imagery.

In his introduction, Khwaja discusses at some length different challenges, strategies and options that a translator must address. He describes his own approach to the texts, which had been selected already by Arif, and his determination to ensure that he remained true to the original. Commenting on translation as “a kind of recoding, a mapping of one language system into another,” he says: “The function of the translator to my mind is to find approximations that do least violence to the original work, while preserving to the greatest possible extent its significations and design. Since it is not always possible to find such solutions, the translator must also be creative and be able to produce a recognisable flavour (rasa) where the taste of the original is not transferable…”

Inevitably perhaps, some poems in this collection have a stronger resonance in English than others, but all of them have much to offer. The book which is the first of its kind to be published in the United States, provides an anglophone audience with a comprehensive introduction to Pakistani poetry.

The collection begins with Iqbal’s famous poem “The Great Mosque of Cordoba,” which is replete with mystical references and evokes the syncretic Euro-Arab culture of Muslim Spain. This provides a marked contrast to Josh Malihabadi’s “Address,” written at the outbreak of World War II amid growing Indian nationalism, which taunts the British by reminding them of their imperial history and equating their misdeeds with those of Hitler. These two poets are followed by translations of Urdu poetry by Hafiz Jallundari, the Pashto poetry of Samandar Khan Samandar and five Pashto ghazals by Amir Hamza Khan Shinwari.

As a poetic form, the ghazal is known to American poets and academics — the late Kashmiri poet Agha Shahid Ali had edited an entire collection of American ghazals — but it remains a difficult form to translate into English. It is heartening to see that the translators have not shied away from this challenge. Several ghazals have been rendered skillfully into English including the Pashto “I Shall Always Go With the Brave Pakhtuns” (translator: Pervez Shaikh), the Sindhi “The Lust of Pearl is Something Else” (translators: Asif Farrukhi and Shah Mohammed Pirzada), and the Urdu “The Flower that Bloomed Beneath the Ground” by Zafar Iqbal (translator: Waqas Khwaja).

The collection is also permeated with some of the most renowned political poetry written in Pakistan, including Faiz’s “A Prison Evening” and “Go Forth into the Street in Your Fetters,” which speak out against tyranny; and Habib Jalib’s indictment of social iniquities in “Code,” which begins thus:

The flame of which burns only in palaces
Lights only a few on the road to happiness
That flourishes in every shade of expedience
Such a code of life, such a dawn without light
I do not recognise I do not accept.
(translated by Waqas Khwaja)

The translations of Punjabi poetry include Ustad Daman’s “My Country, Two Allahs,” a witty comment on General Zia and military rule, while the Kashmiri poetry of Taos Banihali tells of Kashmir’s suffering and its conflicts.

Several poems reflect the mystical dimensions of Islam, which are central to Pakistani poetry. Among the many excellent translations, are the multilayered “Hassan the Potter” by N.M. Rashid, a song of lamentation, desire and spiritual quest, which has all the qualities of a timeless fable and is recreated in English with rich cadences and imagery:

The latter half of the book has a noticeably strong representation of women poets. As Iftikhar Arif observes: “The work of women poets has become increasingly multi-dimensional as they explore and expose the world that appears to their eyes. Never before in our history have we seen such a large number of women writers and poets contributing so significantly to our literature.”

The many translations of women’s poetry in this volume include Fahmida Riaz’s “The Chador and the Homestead:”

My lord what shall I do with this black chador
Why do you (many thanks though) bestow it upon me?
I am not in mourning that I should wear it
to show my sorrow and grief to the world
Nor am I stricken with disease that I should drown myself in the darkness of its folds
(translated by Yasmeen Hameed)

The collection culminates with the Pashto poetry of Hasina Gul, including her sparse and thought-provoking poem “Life and Time:”

We grow up
but do not comprehend life
We think life is just the passing of time.
The fact is,
life is one thing
and time something else
(translated by Sher Zaman Taizi)

This is an immensely valuable collection. It highlights for an anglophone audience the long and rich tradition of Pakistan’s poetry in its many languages, which certainly deserves to be better known outside the subcontinent.

This book review was originally published in the July issue of Newsline under the headline “The Riches Of Pakistani Poetry.”