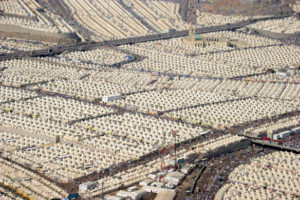 History was made last month when the Federal Investigation Agency (FIA) issued a summons to the Minister of Religious Affairs, Hamid Saeed Kazmi, and a federal secretary, Agha Sarwar Qizalbash, to show up at the FIA headquarters where they were grilled for several hours about their alleged involvement in a Haj scam. Kazmi, along with Qizalbash and Rao Shakeel, Director General Haj, are at the heart of a multibillion rupees scam involving tens of thousands of Pakistani pilgrims who were forced to go without basic amenities during their pilgrimage to Saudi Arabia, despite being charged a substantial amount. Federal Minister for Interior Rehman Malik confirmed that corruption worth over Rs 36 million has taken place in the Haj operation this year.

Every year, nearly 60% of all Pakistani Hajis opt to perform Haj through the subsidised official channel — a task which the government has been undertaking for many years now. It is usually the poor, with their miniscule savings, who opt to take this route. However, this year’s pilgrims were allegedly charged more than what they should have been charged, and what’s more, were given inadequate and far-flung accommodations that largely lacked basic amenities such as electricity and water. According to the Saudi prince Bandar Bin Khalid Bin Abdul Aziz Al-Saud, who first took notice of this corruption and informed the Supreme Court of Pakistan, the pilgrims were charged 3,500-3,600 Saudi riyals for a place that should not have cost more than 1,500 riyals “under any circumstance.”

The day after FIA’s interrogation, Kazmi and the federal minister of science and technology, Azam Swati, belonging to the JUI-F (Jamiat Ulema-e-Islam), were sacked by Prime Minister Gilani for engaging in a public row over the alleged corruption despite his warnings to refrain from trading barbs over the issue. Taking umbrage at Swati’s sacking, JUI-F’s Maulana Fazlur Rehman pulled out of the coalition at the centre to protest Swati’s removal. The maulana stated that Swati was only stating the obvious — that Kazmi was guilty of swindling the Hajis.

Incidentally, Kazmi started out as an Imam in a mosque in Multan and also served for some time as a clerk in the income tax department in Multan before he ended up as a federal minister. He has now been replaced by labour and manpower minister Syed Khursheed Shah.

Rao Shakeel was already being investigated for corruption during his posting in Multan and his name was on the Exit Control List. How he landed the lucrative post of DG Haj is being investigated and there are reports of his connection to Prime Minister Gilani. In Shakeel’s written reply to the court, he denied allegations of corruption stating that the hiring he did for Haj lodging was totally on merit. On Pakistan’s request, Interpol has issued arrest warrants for a Pakistani travel agent Ahmed Faiz, based in Saudi Arabia, one of Shakeel’s men appointed to acquire accommodation. Faiz is also accused of money laundering in Saudi Arabia.

When the scandal first broke in November, the Supreme Court took suo motu notice of the complaints but certain high officials in Islamabad tried to hush it up. The government sent a senior official of the FIA, Mohammad Ghalib to Saudi Arabia to convene meetings with Saudi Haj ministry officials to uncover evidence on the scandal. When presenting his report to the Supreme Court, he informed the court that as part of his investigations he had “interviewed” the federal minister, which infuriated the court who reminded him that he was supposed to “interrogate” and not “interview” a suspect.

Subsequently, another FIA official Hussain Asghar flew to Saudi Arabia with a team comprising 11 senior officials to investigate irregularities in the Haj affairs and has been directed by the apex court to submit a detailed report on their findings.

Incidentally, the scandal made headlines in The New York Times as well, which highlighted the miserable plight of 120,000 Pakistani pilgrims. The paper pointed out that the pilgrims lived under the open skies and had to offer prayers without performing ablution because there was a shortage of water. 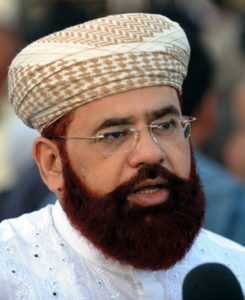 An FIA official revealed that they were investigating the bank accounts of all the suspects in the Haj scandal, and in the case of at least two of them, money has been traced back to their relatives. The official disclosed that the FIA had found clues of fraud and embezzlement in the Haj operation last year as well.

In September 2009, unknown people had attacked Kazmi near his office adjacent to the General Post Office in Islamabad. At that time, it was portrayed as yet another attack on a government functionary by the Taliban in retaliation for the government’s support to the war on terror. However, the investigators have reasons to believe that the attack was a result of the minister’s failure to keep his promise to a group of travel agents in lieu of business in Haj travel. Kazmi reportedly went abroad for treatment but returned to Pakistan in an emergency to collect his share of the booty and then promptly went back to the hospital for further treatment.

The official remarked that the attack on Kazmi was reminiscent of the attack on the French naval officials near a 5-star hotel in Karachi in 2002. Both were originally attributed to the Taliban but subsequent investigations revealed that people who were denied their share of the commission, or kickbacks, may have engineered the attack.

A two-member FIA team, headed by its deputy director Khalid Rasool, is also currently visiting Saudi Arabia to speak with Saudi officials and Pakistan Embassy officials. They are seeking the extradition of at least two Pakistani travel agents who are suspected of pocketing huge amounts of cash that they reportedly shared with the officials involved in the scam.

The million-dollar question is, who will be named in the report to be presented before the Supreme Court?

Shahid-ur-Rehman has been covering economics and finance as a journalist for three decades.