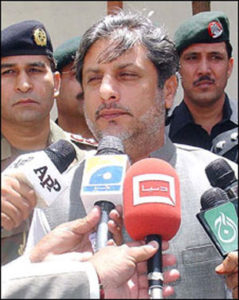 The first week of December proved to be dangerously traumatic for Balochistan’s two chief whips. Both Governor Nawab Zulfiqar Magsi and Chief Minister Nawab Muhammad Aslam Khan Raisani survived attempts on their lives — a grim reminder of the fast deteriorating situation in Balochistan.

Nawab Magsi’s cavalcade was targeted in Kalat’s Mungichar area, some 100 kilometres in the southwest of Quetta, on December 1. He had gone to Kalat to attend his mother-in-law’s funeral. On the way back, an explosive device that had been planted in a destroyed NATO container along the roadside went off. The governor’s vehicle escaped the blast because it was fitted with jammers. However, a vehicle that formed part of his escort was hit and a policeman sustained injuries.

The defunct Baloch Liberation Army (BLA) claimed responsibility for the attack. In a statement, a BLA spokesperson held the governor culpable for the killing of the missing Baloch persons, whose dead bodies were being recovered from different parts of the province.

An irate Nawab Zulfiqar Magsi retaliated by saying that targeted killings should be countered with targeted killings, much to the chagrin of constitutional experts who are perturbed at the governor’s remarks reported in sections of the media. “The governor is the constitutional head of Balochistan. It is his basic obligation to take every possible step to put an end to all unlawful measures [being used by the establishment], but contrary to this he is pleading for the adoption of unconstitutional steps,” says Kachkol Ali Advocate, former leader of the opposition in the Balochistan Assembly. “This implies that people who are at the helm of affairs have lost their confidence in state institutions, or else why would they be advocating unconstitutional steps,” he adds agitatedly.

The Balochistan Chief Minister Nawab Muhammad Aslam Khan Raisani’s convoy was also targeted in Quetta on December 6, when he was on his way to the Balochistan Assembly, which was in session.

Security experts maintain that the chief minister escaped unhurt because he was travelling in a bullet-proof vehicle. However, a member of his security staff was killed and nine others sustained injuries in the blast that badly damaged two other vehicles in the convoy.

The nature of attack on the province’s two heads was different: the attack on the governor’s convoy was carried out through a remote-controlled device, while police maintain that the chief minister’s cavalcade was targeted by a suicide bomber.

A special FIA team, which had arrived in Quetta to investigate the attack on the chief minister, also corroborated the police version.

However, claims from various quarters regarding their involvement in the assassination attempt created a lot of confusion. Immediately after the attack, a spokesperson of the Lashkar-e-Jhangavi Al-Almi claimed responsibility, saying they had targeted the chief minister for supporting non-Muslims. But later in the evening, the Lashkar-e-Jhangvi denied it had anything to do with the attack on the chief minister’s convoy. Within an hour of the LeJ’s rebuttal, another unidentified person professing to be a representative of the Baloch United Liberation Front (BULF), called up the office of a news agency claiming responsibility for the attack and further stating that it was a remote-controlled bomb not a suicide bomber.

However, contrary to his claim, all the evidence gathered from the scene seemed to suggest that it was a suicide attack; moreover, both the police and the FIA have stuck by this version.

Some political observers are of the view that this confusion about who is behind the attacks has been created “deliberately” by certain vested interests. To quote one source, “Raisani is in favour of a peaceful resolution of Balochistan’s problems. He had in fact opposed Rehman Malik’s suggestion of using the stick policy to improve the situation.” According to reports appearing in certain sections of the press, the Home Department had also written a letter to the Frontier Corps (FC) requesting them to refrain from making any illegal arrests.

So this, he maintains, could be an attempt by the hawks in the establishment to get the chief minister to change his stance and support the unconstitutional actions of the federal law enforcement agencies. And it seems to have worked. Nawab Raisani has refrained from commenting on the recovery of the dead bodies from different parts of the province, as have members of his cabinet who, earlier, were extremely critical of certain actions of the federal law enforcement agencies in Balochistan. They too, have fallen silent following severe pressure from the real centre of power. Shockingly, they did not react to the recovery of more than 50 dead bodies of Baloch youth, including two journalists, and the killing of some stalwarts of the Balochistan National Party (Mengal), including its secretary general Habib Jalib Advocate this year.

The Human Rights Commission Pakistan (HRCP) has painted a bleak picture of the province, citing massive violations of human rights. In its report released on the International Day of Human Rights, the Balochistan chapter of the commission stated that the number of enforced disappearances in 2010 had increased manifold as compared to last year. “The practice of throwing dead bodies of missing people on the roads, which began on July 24, 2010, continues unabated. And even on Eid-ul-Azha, nine dead bodies of erstwhile missing persons were recovered. This is highly condemnable,” said the report, adding that the “security establishment has allegedly adopted the worst means of torture.”

Five dead bodies were recovered from a ditch from Bostan in Pishin district near Quetta. “They were dumped into a ditch and covered with limestone to prevent them from being discovered,” said a source in the province’s Home Department.

Relatives of the missing persons are passing through agonising times as very often it is impossible to identify the badly decomposed bodies. Only recently, many relatives of the missing persons arrived at the morgue of a local hospital after TV channels flashed news about the recovery of several dead bodies. But they had to turn back in despair as they failed to identify the bodies which were disfigured beyond recognition. “Relatives of missing persons have become mentally ill because of this painful situation,” says Nasir Baloch, whose younger brother has been missing since the beginning of January 2010.

A recent HRCP report reveals that 118 people, including political personalities and common citizens lost their lives in 117 incidents of target killings while 40 sustained injuries. Another 131 people were killed and 241 injured in 14 incidents of sectarian killings, including two suicide attacks.

Political forces wanting a peaceful resolution of Balochistan’s problems are not very optimistic that the Peoples Party will be able to achieve that. “Asif Ali Zardari is helpless before the intelligence agencies. He cannot play any role in solving the province’s problems,” says Senator Dr Abdul Malik Baloch, president of the National Party, and proceeds to add: “Use of force cannot deliver anything other than generate more hatred.”