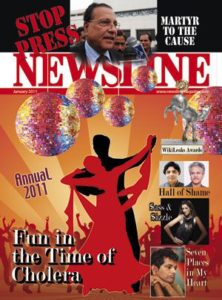 It is a sign of the disturbingly dangerous times we live in.

A 26-year-old security guard guns down Punjab Governor Salmaan Taseer in cold blood in broad daylight in a bustling area of the capital for his stance on the Blasphemy Law — and overnight 3,000 plus people hail the murderer as a hero on a Facebook page and scores of lawyers offer to defend him in a court of law.

The religious lobby refuses to condemn him. In fact, they accuse Taseer of instigating his own murder.

How? By supporting a poor Christian woman who was sentenced to death in what even the Punjab law minister hinted was a flawed trial, and for suggesting that the Blasphemy Law needed to be reviewed.

Surely dissent isn’t enough grounds for murder? And yet, repeatedly, extremists have been allowed to get away with murder in the name of religion.

When demonstrators chanted, “Death to all opponents of the Blasphemy Law” at a recent rally of religious parties, no one protested. When a Jamaat-i-Islami member offered five-lakh rupees to anyone who killed Aasiya Bibi, no one moved against him. And what’s worse, when two fearless members of the PPP — Salmaan Taseer and Sherry Rehman who spoke of amendments to a flawed law — were being threatened, the government didn’t come their rescue. In fact, PPP’s ministers of law, education and information even distanced themselves from Sherry Rehman’s bill seeking amendments to the Blasphemy Law.

Additionally, flanked by Jamaat-i-Islami’s Qazi Hussain Ahmed at a function, Prime Minister Gilani joined the fray, stating unequivocally that there would be no amendments to the law.

This coalition appears to be conceding more and more ground to the extremists, emboldening them further and further to silence all voices of dissent. Over the last few months, they have shot dead several moderate religious scholars and forced others to leave the country. They’ve even distributed pamphlets inciting people to murder Ahmedis and in certain instances, have identified them and their workplaces. They have other heinous crimes to their “credit,” including the killing of Shia doctors and kidnappings and conversions of young Hindu girls.

Any attempt to confront them is met with ferocious opposition. But the most frightening aspect is that daily they are drawing ever more supporters to their cause.

So are we losing the battle for people’s hearts and minds to these religious zealots?

Some say we already have.

Unless the government addresses these issues alongside extremism with single-mindedness and provides good governance, this country is likely to descend into the dark ages.

Newsline‘s January 2011 issue, our biggest issue of the year – The Annual – will be on newsstands shortly.